This "xtremely" forgettable first-person shooter doesn't excel at anything.

Delta Force Xtreme 2 is a first-person shooter where, as a part of the Delta Force Special Operations team, you must protect US interests by parachuting into various third-world countries and decimating a hodgepodge alliance of terrorists, drug smugglers, and Uzbek separatists. The game's primary appeal lies in huge multiplayer matches with vast, sprawling terrain and support for up to 150 players. However, in DFX2 even the multiplayer experience rarely rises above mediocre, while the single-player never even comes close. With gameplay and graphics that lag behind other military-themed shooters, Delta Force Xtreme 2 offers little to distinguish itself.

DFX2 follows the Delta Force formula of large, open maps and subpar graphics with a limited variety of simplistic textures. Even budget game caveats won’t prepare you for these graphics, which compare negatively to older military FPS games that sell for even less. Technically speaking, the game doesn't seem to have advanced much beyond 2005's Delta Force Xtreme, which certainly wasn't ahead of its time. As a result, the absurd physics destroy any sense of realism by making vehicles feel like bumper cars, while weapon recoil is comparable to your average super soaker.

In multiplayer, nobody plays the terrorist; instead, everyone looks the same, and you can only identify your teammates by the presence of names above their heads. The advertised 150-player limit for games seems to be mostly theoretical--you'll be lucky to play on a server with one-third of that number. Similarly, the 40 multiplayer maps are mostly variations of the same batch of maps for the five different competitive game modes. Highlights include the King of the Hill and Capture the Flag game modes, in which good teamwork allows you to dominate the competition. You can hop into a vehicle even while carrying the flag, which is great fun, but given how tough it is to knock out any vehicle larger than a dirt bike, it's not so fun when the tables are turned. Helicopters are powerful, especially in the hands of a dedicated team, and are actually easy to fly, which makes them a favorite among vehicles. In general, death is waiting for you behind every polygon, and it will likely find you without warning and from long range because the giant outdoor maps are a sniper's paradise.

Although you can choose among 22 different weapons, including such accessories as flashbangs and satchel charges, the sniper rifle is supreme in DFX2's large, open settings, so be prepared to keep your head down. One minor multiplayer annoyance is the minimap, which can get cluttered and confusing, more so than in single-player. Speaking of single-player, the campaigns are also available for cooperative play, but the difficulty doesn't seem to scale, which makes the co-op mode too easy and no more fun than playing the campaigns alone. On the whole, multiplayer can be a fun experience, but it isn't anything special or new for the genre.

The single-player game consists of two campaigns that pit you against the culturally diverse members of the aforementioned international narco-terrorist network. The story that binds them together is barely coherent and revealed almost entirely in the pre-level mission briefings. Meanwhile, the enemies themselves seem similarly confused--you'll occasionally see them decked out in desert gear in the middle of a snowy map. Furthermore, the artificial intelligence, although preternaturally effective at long range, is a pushover up close and can be amazingly stupid in certain situations. For instance, if you shoot the driver of a vehicle, the passenger will calmly remain in his seat, apparently unaware of the certain death waiting nearby. Your AI squadmates aren't much better, given that they prefer to cower in the relative safety of a building while you single-handedly battle tanks and accomplish every mission objective.

The single-player game inexplicably uses a checkpoint save system, which thankfully becomes a bit less annoying when you realize that enemies tend to stay dead when you respawn. Even worse, you can't scavenge weapons from enemy corpses, so if you want a different weapon, such as a rocket launcher, to take out a helicopter or an armored personnel carrier, you have to die and change your weapons loadout to get it. Several times the game leaves you wondering what to do at the end of a mission. For instance, in the "oil leak" mission, you must kill every enemy on the map, but once that's accomplished, you'll be stuck until you realize that you have to destroy every unoccupied enemy truck as well. The final campaign mission is appropriately massive, but command's declaration that "the fate of the world" rests on you blowing up a fuel depot in North Africa is decidedly unconvincing.

While the real life Delta Force only recruits the best of the best, DFX2 seems content with mediocrity. It just doesn't excel at anything, and given the multitude of exceptional shooters on the PC, there is no reason to recommend it, even with its budget price tag. Unless you are a diehard fan of the series and just can't wait for next year's Delta Force: Angel Falls, you'd be better off spending your money elsewhere. 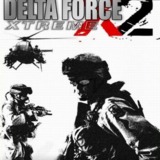