Novalogic's Delta Force was originally one of the foremost tactical shooter series in computer gaming. However, if last year's Task Force Dagger is any indication, the series is in decline. The newest game in the series, Delta Force: Black Hawk Down, focuses on the UN intervention in Somalia in the 1990s, as portrayed in the popular novel and motion picture Black Hawk Down. The new Delta Force game makes some improvements to the series, but it's difficult to take seriously, especially considering some of the game's action sequences, which resemble old arcade games more than they do actual military operations.

Black Hawk Down is loosely inspired by missions undertaken by elements of Delta Force, the US 75th Ranger Regiment, the 10th Mountain Division, and the 160th Special Operations Aviation Regiment. The game is also filled with real-world vehicles and weapons, but don't let that fool you. Black Hawk Down is mostly a straightforward, simplistic action game with some real-world trappings.

The game's first single-player mission provides a good idea of what you can expect from Black Hawk Down. It lifts ideas from the movie and throws them together in an unrealistic and clumsy fashion. The mission itself resembles a rail shooter, an arcade-style shooting game in which you're forced to move along a predetermined path while shooting any enemies in your way. For whatever reason, developers insisted on using this idea over and over. In the first mission, you take part in a rescue operation for a UN convoy that's come under attack in the countryside. You operate a .50-caliber machine gun on one of a group of humvees that blithely drive right into hordes of enemy foot soldiers and vehicles approaching from all sides instead of slowing to properly engage the enemy, stopping, or taking an alternate route. You have no control over the foolish humvee drivers, but instead simply have to blast each new target that appears.

Once you've finished this shooting-gallery segment--and most of the game seems like a glorified shooting gallery, since Somali gunmen will often stand in neat little rows --you run on foot to a small enemy camp to snipe more bad guys. Then, it's a return to more rail shooter action, as you use a minigun mounted on a Black Hawk helicopter to slaughter more unthinking enemies. All this in the span of 5 or 10 minutes.

Anyone looking for a realistic military simulation will be very disappointed with Black Hawk Down. But if you're looking for a simple, old-fashioned shooter, you may enjoy parts of it, assuming you can put up with some major problems. The single-player mission goals often seem contrived or repetitive, and the campaign as a whole seems disjointed and amateurish. It's poorly balanced too--most missions are far too easy, but a few require endless and endlessly frustrating retries. The missions are also unoriginal. Understandably, they lift ideas from the Black Hawk Down book and film, but without doing them any justice. One mission even attempts, however poorly, to re-create the Omaha Beach landing sequence from Medal of Honor: Allied Assault, of all things.

As in previous Delta Force games, Black Hawk Down's AI is extremely poor. The supposedly "elite" Delta Force and Ranger troops shoot each other, push you into the line of fire, and repeatedly miss targets literally right in front of them. Their aim is so atrocious that they can actually walk right past an enemy in a narrow tunnel and not hit their target. The Somali fighters are just as bad. At point-blank range, these militia soldiers often turn away from you and shoot a nearby wall instead. So, it's basically up to you to play Rambo, running around and shooting all the sitting ducks. In fact, the game even keeps score for you--you can expect to kill more than 1,500 Somalis during the campaign.

Still, Black Hawk Down at least tries to immerse you in the action and actually does a half-decent job of making you feel like you're in the middle of a war zone. Amid the mass starvation and clan fighting, you'll need to make your way through poverty-stricken towns filled with innocent civilians and gun-toting thugs alike. Some agitated civilians even hurl rocks and shout at you to leave them alone. The missions at least have some superficial variety, since you'll have to complete objectives like securing weapons caches, assaulting strongholds in towns, destroying bridges, and taking part in the climactic fighting of the Battle of Mogadishu--but once you actually play through them, you'll find that the missions are either too easy or too frustrating.

As it is, the solo campaign is hard to take seriously, given all its problems. Black Hawk Down at least offers fairly extensive multiplayer options. Though there are no cooperative modes, the game does include deathmatch, team deathmatch, capture the flag, king of the hill, and other competitive modes. These don't break any new ground, but the game's unusual setting and large maps make them more interesting than they'd otherwise be. Then again, the large maps can encourage tedious sniper duels, and they also make it incredibly easy to sit at an enemy respawn point and repeatedly kill opponents off before they can react. The multiplayer maps do let you control machine gun emplacements and vehicle turrets, but you can't actually drive or pilot the vehicles yourself. Rather, you hop aboard them as they automatically make their way along predetermined paths. In fact, these vehicles may remind you of a slow-paced amusement park ride, just with automatic weapons.

However, Black Hawk Down does look much better than any previous Delta Force game. Though it's no Unreal Tournament 2003, and it has some bizarre polygon clipping problems, Black Hawk Down does have very good outdoor lighting and good environments. Somali towns look believably run down, since they're full of rusted tin roofs, shattered windows, and other signs of damage and dilapidation. Bodies of water look impressive, reflecting the sun and frothing under helicopter prop wash. At times, Black Hawk Down's presentation actually excels, especially depicting chaotic combat in huge outdoor areas. Bullets kick up sand and tear leaves off palm trees, and vehicles erupt in brilliant explosions. Black Hawk helicopters come roaring in low, throwing up a cloud of dust and causing the trees to sway, while their minigun bullets spark off metal roofs. Also, the game's vehicles and weapons look decent enough, though the game's character models and animations could have used a lot more work. The Somalis look like armed circus performers, as they die a variety of comically acrobatic deaths.

The game's audio isn't quite as good as its visuals. Black Hawk Down has varied music that helps add a little intensity to the action, but some of the guns sound too similar or too bland. Much of the game's spoken dialogue is presented with almost cartoonlike exaggeration, and a lot of the dialogue is downright cheesy and may remind you of a black-and-white John Wayne war film.

Genuinely intense action is hard to come by in Black Hawk Down, and the game suffers from too many major gameplay faults, but unlike the last Delta Force game, this one begins to move the series in the right direction. While it often fails, it at least tries to immerse you in the gameworld, and it features some attractive visuals and a few particularly dramatic scenes. Still, Black Hawk Down is a deeply flawed shooter that has a moment of disappointment or frustration for every moment of fun.

View Comments (1)
Back To Top
5.6
Mediocre
About GameSpot Reviews 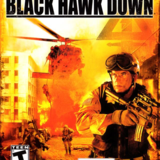 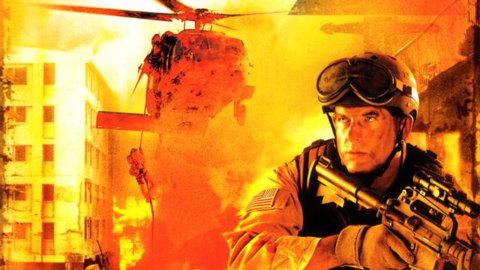 7.4
Sign In to rate Delta Force: Black Hawk Down