Defend Your Castle doles out fun point-and-flick action that works only in short multiplayer sessions.

Released in the first batch of new downloadable games available through WiiWare, Defend Your Castle is an interesting test case for Nintendo's new venture. It was originally released (and is still available) as a free, online flash game, and the WiiWare version is largely the same game despite a total aesthetic overhaul. The gameplay consists almost entirely of grabbing stick figures and flinging them to their doom to stop their mad rush toward your castle. The sound quickly becomes grating, and the constant wrist-flicking is tiresome, but the wacky presentation and frenetic multiplayer action can provide a good bit of fun in small doses. And Defend Your Castle is just that: a small dose of short-lived fun for the low price of 500 Wii points ($5). As test cases go, this one is a moderate success.

Defend Your Castle milks its simple gameplay with castle upgrades and tougher foes, but it ultimately comes down to how fast you can point and flick with the Wii Remote. To defend your castle, you point your bread-clip reticle at a button-headed stick figure and press a button to grab. Then, with a twitch of the wrist, you smash your foe against the ground and vanquish it, or just fling it into the sky and let gravity do the rest. You gain points for each eliminated foe, which you can then spend on castle repairs or upgrades between levels. Upgrades let you convert enemies to your side, where they can man the archery tower, repair your walls, or roll explosive wheels of cap-gun ammunition out onto the battlefield. Each level brings more and more numerous foes that keep coming until your walls collapse under their onslaught.

As a single-player game, Defend Your Castle wears thin quickly. It is best played cooperatively with one or more friends, and up to four people can play simultaneously. The challenge of the early levels is to be the highest scorer and thus gain control of castle upgrades, whereas the challenge of the later levels is pure survival. As your individual efforts congeal into a unified struggle, the frantic fun will yield vociferous strategizing and smiles all around. However, if you play for even a moderate amount of time, the shouts will fade to whimpers and the smiles will turn to winces of repetitive stress fatigue.

The artistic style has a do-it-yourself feel and uses everyday objects, such as bottle caps, string, and construction paper, to create the gameworld. The visual charm lasts longer than the audio charm, which turns sour as more and more squished enemies produce increasingly repetitive squishing noises.

There's not much to Defend Your Castle, but it does have some entertainment value. For the price of a normal store rental, you can buy this game that you'll have around as long as you like. If you play it a few times over the course of a few months, you won't regret the purchase. It's not a game you'll invite your friends over to play, but if you've got a few people and a few minutes, it's good, clean fun. 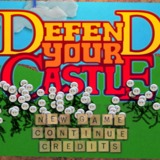 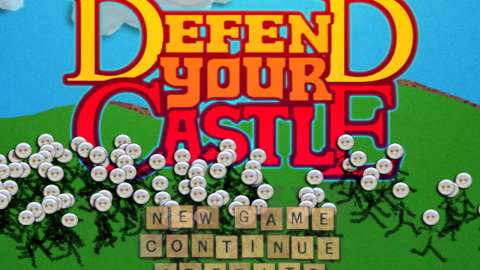 Defend Your Castle is a WiiWare title where you must defeat invaders by casting spells and upgrading your arsenal.