While Deep Fighter isn't destined for any awards, the game's intriguing storyline, solid gameplay, and sharp graphics make playing it a pleasurable experience.

Ubi Soft's Deep Fighter is an expansive underwater first-person shooter that incorporates a bit of puzzle solving and a lot of elements from Origin's PC space-shooting series Wing Commander. However, while describing Deep Fighter as an underwater Wing Commander may be an accurate analogy, Deep Fighter's mysterious story, level bosses, and diverse missions make it a game all its own.

The action in Deep Fighter is primarily seen from a first-person perspective. All of the characters in the game interact with you as though you're right beside them. You assume the role of a private who's part of a defense force that's trying to protect your underwater civilization from hostile forces and deep sea creatures. If you successfully complete your missions, your people may survive long enough to build a giant mothership that will carry the entire society away to safety.

The missions are incredibly diverse, ranging from straightforward battles to intricate tasks that test your controller dexterity and require you to think through puzzles. For instance, one of the early missions challenges you to hunt down and tranquilize a certain type of giant fish. Once you've found and tranquilized the fish, you must then use your vehicle's grappling hook to tow the fish to a breeding ground in order to maintain stability in the area. While this may sound odd, it's actually quite fun, as are most of the puzzle-style missions that direct you to a certain area to complete a specific task. These task-based missions are enjoyable thanks to the game's wonderful control and the neat gadgets that you get to use - like the grappling hook - to complete the tasks. The errand-type missions are also nice, evenly paced breaks between the game's intense battle missions. Battle missions basically are one of three types of levels: defending the base, forcing enemy subs or creatures from an area, or saving someone or something that's important to the cause. The majority of battles put you in a dogfighting situation underwater, which is similar to an outer space type of flying/shooting game, since it's possible to steer the submarine in full 3D. The designers did a great job of making it so that multiple enemies swarm in and try to attack you from every direction. To cope, the game has a wide array of unique weapons for you to use, as well as a few special attack moves that make you look like an ace, once you get them down. You can also continually upgrade your submarine fighter to make it even more powerful throughout the game. In all, Deep Fighter has eight different types of subs that you can pilot through six realistic environments.

Visually, Deep Fighter is a beautiful game that certainly uses a good portion of the Dreamcast's power. The underwater environments are quite expansive and sprawl out in every direction. The levels draw in fairly close to the view of the player, which is typically considered bad, but the game's fog-like effect gives the edges of visibility in the deep blue an authentic murky look. The canyon walls and the rocks below feature rich, realistic-looking textures. One of the things Deep Fighter does well is conveying the vast diversity of the ocean. For instance, when puttering through an area just above the ocean floor, it's common to find an underwater canyon that lets you dive under the planet's surface. In these areas, which are deep below the ocean floor, the sunlight is a bit weak, forcing you to turn on your pod's exterior lighting. The various underwater craft are detailed and move through the depths of the ocean as you'd expect. The majority of the eight bosses you face in the game are rather large and detailed. Some look like giant jellyfish or even huge grasshoppers. Each object in the game moves and fits within the underwater environment of Deep Fighter realistically.

In the audio department, Deep Fighter comes packed with a theatrical score and believable sound effects. Some of the voice-over work is rather cheesy, but it is by no means out of place. In fact, the voices that are just a little off are rather funny and add to the game's slight B-movie feel.

So, while Deep Fighter isn't destined for any awards, the game's intriguing storyline, solid gameplay, and sharp graphics are certainly a winning combination that definitely makes playing it a pleasurable experience. If you're looking for a unique Dreamcast game, Deep Fighter is certainly one of the best offbeat Dreamcast games out there. 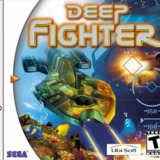 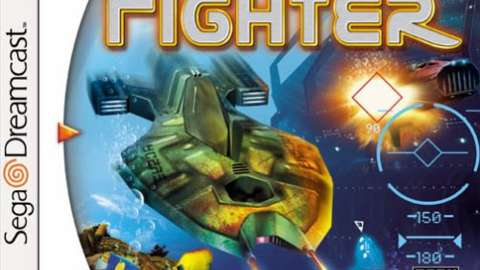