This collection of short-lived minigames marks an unfortunate victory for quantity over quality.

Like Wii Sports, Deca Sports is a collection of sports games with simple controls and equally straightforward presentation. Unlike Wii Sports, it's not free, some of the games control poorly, and only a few of them are really any fun when played with a group, much less alone. There's soccer, basketball, badminton, beach volleyball, motocross, archery, curling, snowboarding, figure skating, and kart racing. By trying to please everyone with variety, Hudson has come up with an eclectic mix of activities that don't fit well together and aren't much fun.

Deca Sports is extremely shallow. If you can move the remote up and down, you'll be able to perform most actions in the game. In sports like badminton and beach volleyball you don't move your player, you just flick the remote once in a while to swing your racket or hit the ball. You'll need the Nunchuk to move your players when playing soccer and you'll have to press the A button to change players, but passing, shooting, and even slide-tackling are all done by waving the remote. This means you'll occasionally pass when you mean to shoot and vice versa. Sometimes, controller inputs simply aren't recognized quickly, or at all. This makes snowboarding and motocross particularly frustrating because crashing into a barrier often brings you to a screeching halt. The controls for curling are imprecise--particularly with regards to determining power. To be fair, a few sports control fairly well. To drive a kart you hold the remote sideways, hit one button for gas, and tilt left or right to steer. Basketball also controls fine; it's the fact that your players constantly pepper the bottom of the backboard and rim with their layups that makes it awful.

Another problem with Deca is that each sport is broken down into its simplest form. Kart racing has just three tracks with six total participants; badminton is one-on-one; and archery is just you shooting at the same target repeatedly with only slight variations in wind and distance to mix things up. Figure skating has only three programs, which never change; all you do is follow a path and flip the remote upward when you come across a red, blue, green, or gray circle. Simple? Yes. Fun? Maybe for a couple of minutes.

You'll have to overcome one last obstacle before you find any enjoyment with any of the sports: the game's terrible AI, which is poor on all three available difficulties. CPU-controlled soccer players pass the ball back toward the midfield on breakaways; figure-skating judges award higher scores to the skater who falls the most; supercross riders and snowboarders will make no effort to avoid you; and the only time points seem to end in badminton and volleyball is when the AI just gives up and doesn't try to return a shot.

Playing with up to three friends alleviates the shoddy opponent AI (unless your friends are really stupid), but you'd be hard-pressed to play each game more than a couple of times before you and everyone else has had their fill. Eventually your friends will ditch you, and because there's no online support you'll have to suffer on your own through the handful of single-player modes. You can play a single round of any sport, participate in a tournament, or take part in a league where you go from one sport to another in an effort to earn more points than the CPU-controlled teams. Each sport also has a challenge that you can tackle. For example, in badminton you need to try to hit the shuttlecock toward specific areas of the floor, while in kart racing you have to beat a specific lap time. The challenges mix things up a bit, but you'll be lucky to squeeze an hour of entertainment out of them.

Deca Sports' visuals are more interesting than its gameplay, but only slightly. There's no Mii support, nor is there any character customization. This shouldn't come as a surprise given how sparse the rest of the game's options are, but the characters are so simple it doesn't seem like it would have taken much extra time to let you create your own athletes. Arenas are basic in their appearance and the blurry backgrounds in kart racing and snowboarding could very well have been rendered on the Nintendo 64. But other than it being hard to see the center of the target in archery because of aliasing, the graphics don't hamper the gameplay nearly as much as the game's other problems, and the ice in the skating rink looks nice.

As tempting as a game with both badminton and curling may be, there's no reason to recommend Deca Sports. The roster of events is baffling, the controls for many of the events are poor, the AI is pitiful, and the gameplay is so shallow that you're unlikely to get your money's worth before this one starts gathering dust on a shelf somewhere. 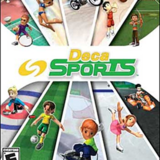