The conclusion to DeathSpank's tale doesn't veer far from the original, but that doesn't make it any less fun.

The line between full-blown sequel and episodic expansion is not always clear, but in the case of DeathSpank: Thongs of Virtue, the balance is skewed toward the latter. But don't assume that this downloadable adventure isn't worth your time just because it shares many elements with the original DeathSpank. The basic combat and visual style have made the transition virtually unchanged, but the consistently funny story is a worthy continuation of the events from the first game. Unfortunately, the problems present in the original release are still here. There isn't much depth to the combat, and there are a number of small bugs that throw a wrench in your spokes of justice. But these issues will cause you to stumble for only a few moments before you're back on your feet. This gung-ho adventure exudes charm, and the thoughtful ending gives a satisfying conclusion to DeathSpank's journey.

The story begins immediately after the events of the first game. DeathSpank has found himself trapped in a minimum-security prison, but bars can contain a world-class hero for only so long. In no time flat, you've made short work of your captors' feeble attempt to keep you locked up, and you're off to finish what you started. Five enchanted thongs are being worn by people with bad intentions, and you must fell these fashionable villains to keep the cursed underwear from spreading more unhappiness in the land. As in the first game, the story is largely inconsequential, relying more on its irreverent humor than a gripping plot to push you deeper into the adventure. Thankfully, the humor is just as consistent as it was in the original release, making light of war, cannibalism, and other, less-dour topics. What elevates this narrative beyond that of the original is the powerful conclusion that wraps everything up. You have a choice in how your adventure ends, and both options paint an interesting portrait of DeathSpank.

A large part of Thongs of Virtue involves talking to various characters in optional but highly amusing dialogue trees. This aspect is unchanged from the original release, but the relevance of these conversations has been enhanced. A greater percentage of quests in the sequel require you to puzzle out a solution, which means you have to pay careful attention to the ranting of these eccentric citizens. A hooker with a heart of gold uses clever wordplay and feminine wiles to blind you from the truth, and you need to deceive at least three different people to learn a restaurant chain's birthday song. Quests such as these add a cerebral quality that was largely missing from the first game. If your button-mashing finger is quicker than your problem-solving mind, you can buy hints for particularly tricky puzzles to point you in the right direction. The hint system is constructed with as much intelligence as the rest of the writing, letting you choose just how much help you want. The first clue gives you a gentle nudge in the right direction, but you can purchase detailed descriptions if you're still stumped. It's a smart system that gives Thongs of Virtue a brainy bend that complements the hack-and-slash gameplay quite well.

In combat you have eight buttons to map your weapons, potions, and magical spells to. It may seem like overkill to have multiple melee weapons at your fingertips, but there's a method to this madness. By alternating your attacks, you build up your combo meter, and this is important to keep in mind when fighting foes that exceed your current level. But even with a simple combo system, fighting in Thongs of Virtue is just as shallow as it was in the first game. Most enemies fall after just one or two swings from your strongest weapon, so you don't need much skill to quash those who oppose you. There is at least more versatility in your ranged weapons. A healthy assortment of guns, bazookas, and even grenades give you plenty of different ways to take down your enemies from afar, and you even have to worry about ammunition at times. You may not want to fire all of your shotgun rounds on lesser enemies when a boss is waiting for you around the corner. Combat is still not dynamic enough to be a serious draw in Thongs of Virtue, but at least it's not as repetitive as it was in the first game.

An eye-catching visual design ensures that each location you visit carries with it its own feel. The early portions of Thongs of Virtue take place in a grimy prison yard and a bullet-riddled war zone, which is certainly a jolt for those expecting the pastoral lands from the original game. But even these dank environments contain pleasant sights, most notably a few picturesque buildings in a decrepit city. Other portions of the game have a more colorful view, from the icy hills of the North Pole to the sweltering heat of an expansive desert. As pleasing as the environments are to look at, there are sometimes problems with movement. There are moments when buildings and other obstacles prevent you from seeing your attackers. Because the combat is so simple, this rarely results in death, but it is frustrating being ambushed by enemies you can't see. More troubling are a few bugs that trap DeathSpank in place. This happened a couple of times during the adventure, usually when traveling near the edge of the screen, and the hero couldn't move until we were killed or restarted the game.

DeathSpank: Thongs of Virtue proves that some formulas don't need a drastic overhaul to be fun. The small tweaks liven up the gameplay, but it's the goofy story and striking visuals that provide the most pertinent lure. Don't be scared off by the $15 price tag, either. This long adventure can stretch for more than 15 hours if you complete every quest, and there are so many characters to meet that things never get boring. It would be nice to see more in-depth combat, but that's not the point of this adventure. Thongs of Virtue is a simple journey that pushes humor to the forefront, and it's a refreshing change of pace for people looking for lighter fare. Being a hero may not be easy, but it's certainly funny. 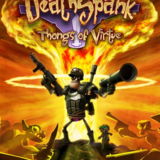