Goofy humor and a bevy of wacky objectives make it easy to lose yourself in this action role-playing game.

You have to do more than slay evildoers with your trusty sword to become a world-class hero. Sure, it's easy to grab the spotlight by rescuing orphans in dramatic fashion, but to really earn such a prestigious title, you have to lower yourself to the level of the common man. Menial tasks, such as coaxing a unicorn to produce the finest fertilizer or fetching a sock for a lonely tree in the woods, are small but important ways to ingratiate yourself in a community and become a hero of the people. DeathSpank relishes these modest pursuits, mixing the swashbuckling joys of being a noble warrior with the goofy ventures that only the purest of heart would dare to touch. However, DeathSpank does have a few problems. The hack-and-slash combat can become repetitive as the hours rush by, and you have little choice in how your character grows. But the surrounding elements are so strong that it's easy to overlook these missteps. A quirky sense of humor, hummable soundtrack, vibrant visuals, and a healthy variety of objectives keep this adventure entertaining from beginning to end.

Why are ancient artifacts so revered? DeathSpank, the titular star of this action role-playing game, is on a quest to obtain a mythical artifact, even though he doesn't have a clue as to what kind of power it holds. Even more baffling is the purple thong the hero wears, regardless of how cold it is outside. But those mysteries are but small parts of the adventure. The story is little more than an elaborate fetch quest, but it's the trappings around this cliche plot that make your plundering so engrossing. This game is absolutely brimming with personality. All of the people you meet along the way have an oddball idea about how the world functions, and they get their points across in an over-the-top style that is sometimes funny but always goofy. Every dialogue you enter into has a conversation tree that may not always imbue useful knowledge, but it's worth going through all the options just to see what's on the minds of these citizens. DeathSpank is bursting with whimsy and silly nods to modern-day conventions, which makes it a joy to see what lies ahead.

Talking to citizens is not only entertaining, but it's also necessary if you want to pick up extra side missions. The story objectives cover situations such as bribing an orphan with a pony and rescuing a felt salesman from the bowels of evil, and the optional tasks you perform give you even more goofy situations to solve. Most of your goals boil down to fetch quests or slay-every-enemy affairs, but there are a few puzzles as well, which give the game more variety. Figuring how to make a taco spicy or what to say to get a married couple back together requires a bit of thought, and it's satisfying to overcome these little roadblocks. It's fun to venture to various towns to see what new job you can pick up, but the colorful visuals are reason enough to check out every corner. Each area has its own artistic style, and the catchy soundtrack is a pleasant companion for your travels.

Of course, you're not going to spend all your time talking to your wacky neighbors. The majority of the game centers on the combat, and though it isn't very deep, it does manage to stay entertaining for the most part. You have eight separate buttons (the D pad and the face buttons) to map items, magic, and weapons to, which gives you a fair bit of flexibility in how you want to prepare your warrior. Although the majority of the fights require little more effort than slamming on your attack buttons, there is more strategy for those who would rather win in style. Powerful combos can be strung together if you alternate which weapon you attack with, and it's fun to mix and match your swords, cleavers, and other pointy death tools to find a combination that works for you. There are also magical abilities that are not only effective ways to dispatch foes, but also add a bit more humor to the proceedings. Summoning an orphan to your side or shooting a clutch of angry chickens is part of the goofy fun, though most of your attacks are conventional.

A steady stream of dropped loot ensures you regularly gain access to new gadgets. The game automatically equips the best armor for you (if you select that option), which means there isn't a reason to spend time figuring out the best protection, but choosing the right item or spell in a pinch can be the difference between life and death. Although it's easy to fall back on standard melee or crossbow attacks for the majority of battles, there are so many potions and magic spells to play around with that it's more effective to test out these abilities as frequently as possible. You can cause fire to rain down from above, conjure a black hole, or even shrink yourself to a bite-size proportion to avoid an angry beast, and the supply of new items is so large that you don't have to worry too much about running out. It's a great system that adds a bit of spice to the normally repetitive hack-and-slash action. You still spend more time mindlessly mashing buttons than trying out new tricks and tactics, but the wide assortment of weapons and items keeps things fresh.

The simplicity of the combat unfortunately stretches to other aspects as well, and the results are not always as successful. You don't have much say in how your character grows as you progress. Every time you level up, you get to choose one of three hero cards that give you a boost to one of your abilities. For instance, you can walk faster or up your melee attack power. However, there's a finite number of these cards, and by the end of the game, you unlock just about every ability. So your choice ultimately boils down to what order you want to unlock these perks in rather than the ability to mold your hero in a specific image. The cooperative play is also quite limited. A second player can jump in at any time (locally only), but must play as the googly-eyed Sparkles the Wizard rather than a unique hero. Player two doesn’t have access to looted weapons or items either. Rather, Sparkles has a repertoire of four preset moves, as well as the ability to teleport to DeathSpank's side. Thankfully, because the combat is fun and the world so inviting, cooperative play still provides a good time. But its limited scope is a missed opportunity.

A strong sense of humor is the backbone for this quirky adventure, but there is more to this game than a few silly jokes. The combat is simple, but there are so many spells and items to play around with that it stays consistently entertaining. And the colorful visuals and infectious soundtrack add to the experience. A few truncated elements do serve as roadblocks, though. The stripped cooperative play adds little to the quest, and you don't have much say in how your character levels up. But DeathSpank is so charming and endearing that it's easy to lose hours to this quest trying to obtain another ancient artifact. 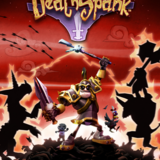 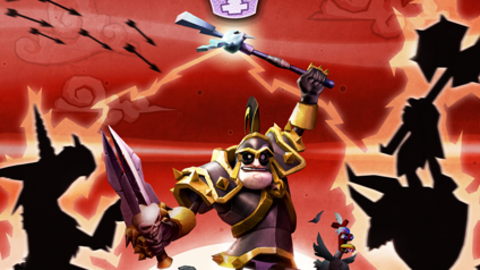 This is a new game series written by Ron Gilbert that follows the adventures of a misguided hero named DeathSpank.