The bullets are plentiful in this crazy, colorful shoot-'em-up.

There's no doubt that Deathsmiles is bound to garner some attention for its clearly underage witchy schoolgirl protagonists who must battle through evil hordes and demonic forces in provocative attire. However, this gothic-themed Lolita shooter isn't haphazardly slapped together by just anyone. It's a finely honed bullet-hell shoot-'em-up crafted by Cave--the Japanese developer responsible for a remarkable number of insane arcade shooter games in the east. As such, the game is less about catering to pervy-minded gamers who get cheap thrills from a few up-skirt shots and more about delivering a seriously palm-sweat-inducing ride through a deadly hailstorm of insurmountable bullet fire. It's a bit of a rare treat for stateside gamers to get a shot at surviving the psychotic deluge dished out by Cave games, short of importing them at a high price. Games like Deathsmiles make it well worth the wait because the glut of play modes, crazy gameplay, and over-the-top boss battles draw you into a twitch-laden vortex from which it's brutally hard to escape. And you won't want to escape.

As an arcade game that revolves around sending throngs of satanic beasties to their doom, Deathsmiles doesn't concern itself with the most elaborate of plots, and that's fine. A handful of little girls have mysteriously been plucked from their normal existences in the mortal realm and dropped into a twisted alternate dimension called Gilverado. There, these young "angels" develop mystical powers and the ability to summon friendly demonic familiars to their side. Capable of unleashing a potent array of firepower, the girls are enlisted to help the king keep peace in the kingdom. Unfortunately for them, it's not long before the gates of hell are thrown open and a torrent of rampaging creatures is unleashed across the land. There are scores of vile monsters storming your way, and you need to blast the living hell out of them.

After selecting the girl of your choice, you set off to slay monsters across dank swamplands, creepy castles, molten crevices, rancid graveyards, and other terrain. Every location throws a swarm of gnarly creatures at you, and enemies approach from all four sides of the screen, forcing you to frequently change your firing direction to compensate. The left and right triggers switch up your shooting direction, and the face buttons can also be used to engage a more powerful attack in either direction. The trade-off for using these heftier blasts is a slower movement-response time, but it's necessary during boss battles and when facing larger enemies. Your handy little familiar helps out as well. It floats around and fires along with you, so you can position it strategically to block some bullets and blast at enemies approaching from blind spots. And because no bullet-hell game would be complete without a screen-destroying explosion button to wipe out everything in sight, Deathsmiles has that too. Monsters drop glowing skulls that you'll gather to boost your score and your kill meter. When it maxes out at 1,000 kills, you can trigger a power-up mode that substantially boosts your score and firepower for a short time.

The opponents themselves aren't as troublesome as the frenzy of small purple orbs they emit in vast quantities. On the lowest difficulty setting, the bursts of bullets are simply hard to avoid; on a higher difficulty, the screen is almost completely obscured by them most of the time. While dodging the sprays of bullets and swirling death that shoots forth from fanged ogres, mighty serpents, tree beings, demonic entities, and other adversaries gets a lot harder the further you venture into the game, you only take damage if a bullet hits the smaller glowing heart area in the center of your character. This gives you some decent leeway to stay alive when you're frantically trying to squeeze through tiny open spaces amidst blizzards of flying bullets. Death is inevitable, but unlimited continues will keep you from putting your fist through the screen. Not having to worry about running out of lives also keeps the frustration to a minimum, and even though this soften the impact of the game's overall difficulty, there are still high scores and leaderboards for players who want to further challenge themselves.

It's entirely possible to blow through Deathsmiles' short smattering of levels from start to finish in about an hour. While that's painfully short for a retail console release, there are a lot of reasons to go back and play through the game numerous times. For starters, the four main playable characters have a unique visual style; their own familiar, method of attack; and minor special story elements. This makes playing through repeat sessions with each character a different experience. Additionally, there are three ways to play the core game. You can play a straight-up port of the original arcade game; a cool "arranged" mode that lets you control your familiar independently from your main character with the thumb stick; and a graphically enhanced Xbox 360 mode that has extra visual polish. Stages can be tackled in almost any order, which further keeps replays feeling fresh. On top of all of that, there's a Mega Black Label setting for each of the three core modes. This adds one of the bosses, Sakura, as a fifth playable character; includes a new ice-palace stage; and adds an optional supermasochistic fourth difficulty setting called Level 999 that literally bathes the screen in gratuitous gunfire. When you throw in some crazy local and online multiplayer co-op, a Score Attack mode, and the ability to record and watch your replays, it all adds up to one hefty package.

The fast-paced shooting action is intense, frantic, and a lot of fun. Getting pummeled and dealing out some death of your own along the path through each stage is rewarded with some incredible boss fights. These tough encounters are memorable because of the spectacular assaults you face and the general weirdness of your towering opponents. One stage has you fighting a giant cow head with Borg-like cubes floating around shooting at you. Another has you battling a half-buried undead giant whose face eventually rips off and tries to chomp on you with its skeletal remains. Two-headed dragons, a hefty tree demon, and some little dude without a shirt are among other big baddies that will try to drown you with flying debris and bullets. On the higher difficulty settings that feature a lot more bullets onscreen, the Xbox 360 chugs a little to keep up with the action. Though it's minor, the slowdown isn't entirely unwelcome because it gives you an extra split second to try to weave through the tiny openings in the walls of death cascading around you. As niche as it may be, Deathsmiles is a top-notch shooter that brings the crazy Japanese arcade action in spades with a great presentation and a lot of options for bullet-hell buffs. 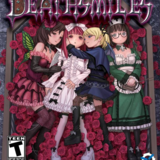 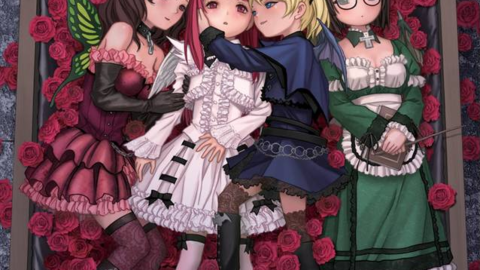 Japan's gothic-lolita shmup hit, DeathSmiles, makes its way to the U.S. in 2010.