It may not be easy doing sneaky dirty work in the Second World War, but it is more entertaining than you'd expect.

Although the name SMERSH sounds like something out of an old Get Smart! episode, nobody laughed at this counterespionage organization during the Second World War. Translated into English, this acronym means "Death to spies," which pretty much sums up the no-nonsense nature of this precursor to the Soviet Union's dreaded KGB. The game of the same name from Russian developer Haggard Games doesn't mess around either, presenting some of the grittiest stealth action to hit the sneaker genre since Agent 47 first shaved his head. Open-ended mission objectives, smart level design, and extreme difficulty also add to the realism, proving that developers haven't wrung all of the good game ideas out of WWII quite yet.

Gameplay itself isn't as original as the story or setting, however. Even though Death to Spies is the first game to put you in the shoes of a SMERSH counterespionage agent tasked with stamping out Nazis during Hitler's adventures in the USSR, the game is reminiscent of such games as Hitman and Splinter Cell, crossed with the more puzzle-oriented stealth served up in the Commandos series. So even though you creep around in the third person, knocking out bad guys, as well as playing dress-up, you can also check an overhead map that tracks sentry positions and vision cones depicting how far guards can see. If you've played sneaky games in the past, chances are good that this will seem like familiar ground.

Well, with one big difference: Death to Spies is more true to reality than most of its forebears. The design is packed with grim authenticity even while sticking close enough to the stealth game template to feel just a tad formulaic. Missions feature a lot of par-for-the-course assignments, such as infiltrating a bombed-out town to snatch secret plans, sneaking into a Nazi prison to assassinate a compromised comrade, and blowing up an enemy-held bridge, but these generic missions are spiced up with such noirish escapades as checking into a Moscow hotel to kill an ally selling secrets to the British. All of these locales feature fairly typical office buildings, stone fortresses, military encampments, railyards, and the like. However, each site is elevated above the average by good attention to detail, as well as a graphics engine that does a superb job with lighting and shadow effects (the core visual components of any sneaker).

Most levels are wide open, leaving you free to blaze your own trail to the end goal. In theory, anyhow; in reality, you generally have just a couple of paths to start off with when heading out to each mission objective because there are simply too many guards to make experimentation viable. Although you're skilled at the usual stealth exploits, such as moving silently, cutting throats with a knife, killing quietly with a choke cord or silenced pistol, and disguising yourself to better fit in with the locals, there is so much opposition that you can't freely employ your talents. Sentries typically patrol in pairs, but most corridors feature at least one guard at each end, typically bolstered by another grunt (or three) walking back and forth between them. Even when you're all dolled up in an officer's uniform and able to walk right past enlisted men, you can guarantee that rooms in key locations will always feature at least one or two superior officers who can tell you're an impostor on sight.

It all gets a bit ridiculous at times. Many challenges in Death to Spies are insanely difficult. At one point in the third mission, you're tasked with sneaking down a corridor filled with a dozen storm troopers and slipping unseen into a room to silently murder two alert officers, as well as a guard. It can be done, but you've got to time your movements absolutely perfectly to have even a shot at success. Things get even worse later in the game. Mission seven has an objective where you have to kill two senior officers in a room packed with their buddies and a bunch of machine-gun-toting guards. Simply shooting your way through these tough scrapes is virtually impossible too. If you respond to a screwup by going Rambo and trying to kill everyone in sight, you'll get gunned down in moments by the spectacular number of enemy troops on hand to respond to alerts. Unless you're in one of the rare isolated spots on the maps and can take out the bad guys in a few seconds with a silenced pistol, getting identified as an intruder just once means das vadanya, comrade, so get ready to reload a save.

Still, even though this unceasing difficulty cranks up the frustration factor, it never seems like the game is cheating you. While it's a bit cheesy that officers seem to have the ability to see through disguises almost instantaneously, just about everything else is rooted in reality. Guards will spot you if you try to hide in the shadows a few feet away. Strange noises are always investigated. Entire platoons seem to respond whenever shots are fired. An alarm is immediately raised as a result of a body being discovered. You can only carry two weapons, generally a rifle and a pistol of some sort. Every object in the game has weight, so you can't run around with dozens of ammo clips or chloroform bottles. And so on.

Not everything feels totally natural, though. Interactions with enemies come off as a bit artificial. Few sound cues are given by guards except for the odd "Schiesse!" or "Was ist los?" and those lines are usually only heard when you've either been spotted or it's too late to avoid being spotted. Most of the time, everything is so silent that all you can generally hear are atmospheric noises, such as a gramophone playing in the distance and the wildly out of place Euro disco that kicks in during combat. Because of this, you rely more on the vision cones displayed on interface amenities, such as the overhead map and a danger bar that appears then fills up when you're on the verge of being detected in your actual surroundings. Seeing as most of the game is so brutal and uncompromising, these issues really stand out. A few more organic touches would be a big help even if it came in the form of cheesy stealth-game conventions like guards muttering "Maybe it was just rats."

Even with some missteps, Haggard Games accomplishes a lot with Death to Spies. Deeply difficult and absolutely remorseless, this game isn't for the faint of heart. But it is definitely worth the struggle, as long as you've got the patience to appreciate such a rigorous design. 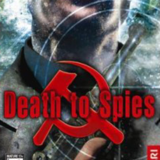