Death Stranding Director's Cut Review – The Limits Of The Dead

While the new features and missions are nice, the world around us has made Death Stranding better.

Just like learning how to bake bread or mastering a language, going back to Death Stranding was one of those things I had always intended to do during lockdown, but never did. Returning to a gray, hazy, hostile world of death and human misery just seemed like the worst possible choice for living through a real-world pandemic. I should never have hesitated. In the face of all of Death Stranding's violence, its dead things, its surreal horror, and the bleakest, salted-earth portrayal of the post-apocalypse, there has always been this strong mote of hope and love and bonding and connection that's never been more necessary. If nothing else, Death Stranding: Director's Cut is the best excuse to return to the valley of the shadow of death, and find the grim beauty waiting there. What the new features and content bring to the table is simply making that return easier and more welcoming than ever.

Death Stranding was originally released for the PlayStation 4 in November 2019. In our original review, which you can read here in full, Kallie Plagge awarded it a 9/10, saying that "Death Stranding is a hard game to absorb. There are many intertwining threads to its plot, and silly names, corny moments, and heavy exposition belie an otherwise very simple message. That comes through much more clearly in the game's more mundane moments, when you find a desperately-needed ladder left behind by another player or receive a letter from an NPC thanking you for your efforts. It's positive without ignoring pain; in fact, it argues in both its story and its gameplay that adversity itself is what makes things worth doing and life worth living. It's a game that requires patience, compassion, and love, and it's also one we really need right now."

More to the point, however, Director's Cut is a bit of a misnomer. Despite the appeal of an auteur like Kojima taking a more proactive approach, tweaking dialogue and text files or adding scenes, nothing terribly germane to the plot, story, character development, or the way the world is presented has been messed with here. This is still largely the same game it was in 2019: a post-apocalyptic odyssey to reconnect the disparate cities of America at all costs, with our taciturn, faithless hero, Sam Porter-Bridges, facing the literal and metaphorical ghosts of America along the way. That's just the very tip of an expansive iceberg of a plot that toys around with metaphysics, the role of politics in our lives, the inherent nihilism of fundamentalist thinking, the social contract deteriorating, and lots more. All this is held up by a primary gameplay loop that has you playing postman to the entire country--mostly on foot--and across varied, melancholy-inducing terrain. Still, all of that was in the game we got two years ago, and by and large, the Director's Cut is the same kind of enhanced experience Ghost of Tsushima's Director's Cut was.

That's not a bad thing, it's just not a big thing. Newcomers and those starting from scratch will benefit the most. The Director's Cut features a much more elegant set of introductory challenges, clearer explanations of core mechanics, and some helpful bits of gear like the Support Skeleton and the new debilitating Maser Gun are available early on, taking a lot of the aggravation out of the game's first few episodes. There is an AR firing range allowing you to test out any new weaponry you get against static targets or on bots who function like the MULE enemies, which was especially helpful in letting me finally get the timing down for parrying using the Strand rope.

All that is paired with the expected PS5 perks. The graphical upgrade to 60fps is near flawless, and despite having two modes for Quality and Performance, both managed to stick to that frame rate target, with Quality mode only running into issues when getting caught by BTs, or getting caught in a voidout. Load times are virtually eliminated, which makes getting back to business after said voidout much easier to deal with. Once again, the haptics on the DualSense are the MVP here. You can feel every little step or movement Sam takes, and the pressure and difficulty involved in trying to balance him when he's carrying a heavy payload is absolutely wonderful here. The sensation adds an extremely effective layer of immersion to the experience.

There is, in fact, some new story content, the most prominent of which is tied to Sam discovering an abandoned factory/science facility early on, with new areas opening up as you progress through the game. It's a mixed bag. On one hand, the new story being told is a powerful one that branches out of the core game's explorations of what America actually is, what we've lost along the way, and the best way to get it back. And it lays out the question of what we leave behind for our children and if we can even atone for the sins of previous generations in any way that matters. The problem here is getting that story in full involves a hell of a lot of stealth, and while there's always been some of that in the larger game, this clearly feels a little too much like the game nudging and winking at Metal Gear fans, in a game that is built mechanically and tonally different.

That goes for a lot of the new features, like the Maser Gun, cargo catapult, Buddy Bots, and racetrack. All of these can definitely make the game easier--the Buddy Bot being able to cart resources back to cities on your behalf is a real time-saver, in particular--but it also changes the focus of the game a bit from the work that goes into connecting America again, to basically pointing at circles on the map, and commanding a computer to do the work for us. That's especially ironic since that's literally how the in-game world created its former postal worker antagonists altogether. The game shifts to being a lopsided RTS in these moments instead of, well, whatever you'd describe Death Stranding as.

Two years after having beaten it, I'm still unsure of what I'd actually classify Death Stranding as, in terms of genre. Kojima might want to make "strand game" a thing, but that's still a little too loose in terms of what's been accomplished here. And yet, it's arguable the game's greatest strengths come from that indefinable nature, of the action and mechanics being bound by the story being told, and not vice versa. The beauty of the game actually lies in the difficulty of traversing the American wastelands, burdened with all of the nation's hopes and dreams, and with death itself physically manifesting on all sides. It comes off a little disjointed by taking too much of that out of Sam's hands, even while it admittedly makes the game and its numerous gameplay elements less obtuse. Thankfully, as mentioned, none of the new content changes what Death Stranding ultimately is and becomes.

Even having said that, it is undeniable that returning to the world of Death Stranding after the year we've all had was affecting in ways I never anticipated going in. It didn't strike me the first time just how much positive feedback the game gives for every little thing Sam does. It didn't strike me the first time just how accurate the game would be in how isolation makes every interaction with a live human being into an event. The hope, the despair, the determination of it all just plain hits differently now, and in ways that make the game one to experience even if you don't end up liking it enough to stick with it for dozens of hours. The Director's Cut still does an admirable job goosing up that experience for maximum immersion. Even while trying to nudge itself towards something more approachable, there is still nothing quite like this game.

Justin Clark spent 40 hours on Death Stranding Director's Cut, half from the beginning, half with his imported PS4 clear save. He is currently accepting applications for babies to carry around in a clear container on his stomach for Halloween. A code was provided by the publisher. 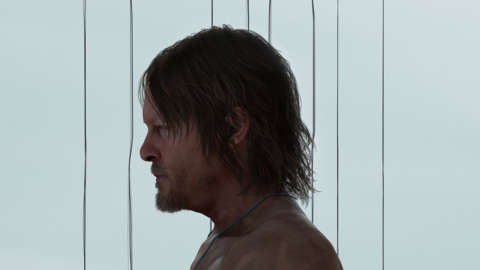