Dear Esther spins an intriguing narrative, leaving you to decipher not only the outcome, but if this is even a game.

Dear Esther is not a video game; at least, not in the traditional sense. In 2008, it was released for the PC as a Half-Life 2 mod. Now, it has been rereleased as a stand-alone product with updated visuals and remastered audio. It casts you as a person stranded on a lonely island. At first, it seems you are the narrator, whose voice chimes in as you explore. However, even this easy assumption is called into question as the pieces of the narrator's story come together. If met with an open mind, Dear Esther can intrigue you with its haunting tale.

You're more of an observer than a participant in Dear Esther, walking and listening and doing little else. It's devoid of enemies to test your reflexes, and the only puzzles are those built into the story. The singular goal is exploration, albeit along a linear path. Your journey begins on a shoreline, staring out into the endless sea. Then, the narrator interjects. His voice--that of a seemingly middle-aged, well-spoken Englishman--is your only companion. He recounts events from his life, both past and present, that lead up to his incarceration on the island.

These snippets are automatically triggered as you progress, and their delivery is excellent. The lyrical prose blends exposition with poetry, and the articulate delivery injects hints of frustration and melancholy. Together, they form a consistent tone as somber and beautiful as the island itself. Dear Esther's visual update renders it almost unrecognizable from what it was four years ago. While the setting is realistic, Dear Esther plays with light and color in a way that makes each section feel distinct and, at times, otherworldly.

Eventually, you learn of the island's previous inhabitants and their toils. That, in turn, informs your own situation. As you start constructing what's really going on, more questions are raised than can be answered. Am I dreaming? Why am I here? Am I the narrator? One of the tale's few certainties is the significance of the distant, blinking radio tower, which is rarely out of view.

Dear Esther is more of an experience than a game. You are intended to experience and internalize everything around you and form your own conclusions about what's happening. The story in Dear Esther works well in video game form--possibly more than as a book or movie. Obviously, the narration and images could be conveyed in either medium, but video games allow for pacing and discovery that would be impossible to reproduce elsewhere.

The narrative is intentionally ambiguous, and it is flexible enough to accommodate what you see or don't see. An old photo coupled with a simple candle could go completely unnoticed by some, along with the insight that could be drawn. Split paths and side routes are common. And while most lead to dead ends, the additional narration or imagery gained could help shape Dear Esther's outcome. Revisiting previously completed areas will sometimes produce new lines of dialogue as well. Depending on how much time you invest, you can flesh out the world in impressive and intriguing ways that could be ignored by someone who rushes through.

For the most part, the story is expertly told, but there is one stumbling block along the way. At one key juncture, control is wrestled away from you, and the transition is immensely unwelcome. After spending hours unraveling the tale at your own pace, this is a jarring intrusion that hurts the suspension of disbelief. It's a shame a more creative solution couldn't have been implemented since this one scene ultimately couldn't end any other way.

Dear Esther's somber tale is a fine companion to a stormy evening and a hot beverage. In the right setting, with the right mindset, it can be engrossing in a way that few games can. Going in, you may question if Dear Esther should even be classified as a game. But that question slowly fades the more hours you sink into this adventure. Instead, you question the existence of your character and the fate of the island, showing that semantic inquiries aren't nearly as interesting as a well-told tale. 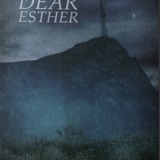