If you like playing video games to release tension, and you don't care about good stories or online multiplayer modes or any of that stuff, definitely rent this one or something.

Dead to Rights II is strangely evocative of the sorts of purely violent action games that were popular in the late '80s and early '90s. That's actually what's pretty amazing about it. It's this raging, no-nonsense killing spree that lasts maybe eight hours. Practically every level is exactly the same, but the vicious shooting action is executed well enough to carry the game all the way to the bitter end. The original Dead to Rights landed on the Xbox back in 2002, where it proved to be an extremely challenging and fairly ambitious action game with a surprisingly convoluted storyline. This sequel offers a distilled version of that same experience, though without any of those pesky minigames or coherent story sequences that get in the way of blasting one corridor full of bad guys into oblivion after another. Frankly, Dead to Rights II feels like a budget game, since most aspects of it seem pretty dated. But while it's not the flashiest game in town, nor does it offer much bang for the buck, that doesn't mean Dead to Rights II isn't worth playing. It's worth checking out if you're the sort who yearns for the days when games just didn't need to justify themselves.

In Dead to Rights II, you play as a hard-boiled cop named Jack Slate, who's hot on the trail of...ah, who cares? While the game throws in a few cinematic cutscenes into the proceedings, it does so practically with a nudge and a wink, because the story is completely stereotypical and completely irrelevant. The point is, Jack Slate has a whole bunch of levels to fight through. These levels sometimes vary in appearance, but they're pretty much all corridor crawls littered with objects that can either be used as cover or blown up. Around every bend, Jack will square off against maybe a half-dozen armed thugs. They'll sometimes hide behind stuff, and they'll toss grenades at you if you hide for too long. But they're mostly prone to just pointing and shooting at Jack. So the object is to kill them as quickly as possible before they can cause much damage. Jack's trusty canine companion, Shadow, is on call to help dish out the hard justice, and Jack can also execute some cool slow-motion dives and close-combat moves. He can also pick up health packs and armor. The game is quite difficult at the default setting, though if you finished Dead to Rights for the Xbox, you'll do just fine. Still, the levels tend to be nicely balanced so that you barely manage to make it from one end to the next. Each level is quite short and completely linear, so some straight-up trial and error should get you through even the toughest ones in due time.

Dead to Rights II looks like a rip-off of Max Payne, and in some ways that's a fair assessment. The mechanics are completely different, though. Like the original, what's interesting about the gameplay of Dead to Rights II is that you don't actually aim. You just press down on the right shoulder button on the Xbox, or R1 on the PlayStation 2, to target the nearest enemy. Then you hit the fire button until the target dies. So while the game may look like some kind of a shooting gallery, in fact, it's more of a test of your reflexes.

Jack's got some other skills. He can disarm and execute foes that get too close to him using moves that would make The Punisher squirm, he can dive in slow motion to pick off multiple foes while in midair, he can take enemies hostage and use them as human shields, and he can summon his doggy buddy to maul enemies and retrieve their guns. Most of these abilities are governed by a recharging adrenaline meter. In practice, you'll mostly use the slo-mo dive and sometimes the dog, though the disarm moves are too good to pass up. Another interesting holdover from the first game is that Jack Slate can't be bothered to reload his weapons. Each foe you kill drops his gun, but guns have only a small amount of ammo in them. Jack empties the clip and tosses the gun aside, switching over to one of his others. Submachine guns, shotguns, pistols, assault rifles, and a few other weapons are available, but in keeping with the game's "I don't care" personality, these aren't even balanced like you'd expect. Dual pistols are probably the strongest, most reliable weapon available, better suited for killing than automatic rifles. But whatever. You'll use every gun at your disposal as you tear a swath through your enemies. The levels and several boss fights are forgettable for all being so much alike, but the game is fun and intense while it lasts.

The original Dead to Rights featured a whole mess of different minigames, as well as surprisingly difficult hand-to-hand brawling sequences. The sequel does throw in a few hand-to-hand sequences, at least. These are completely nonsensical in that you'll suddenly go from a shooting level straight into a level with no guns in it. The brawling levels are simple and pretty dumb, requiring none of the fast reflexes or tactical finessing of the shooting stages. They're thankfully scarce.

Dead to Rights II doesn't look very impressive, but it usually runs nicely and smoothly, and the shooting action has a satisfying look to it. So enemies recoil violently as they get riddled with bullet fire, and there's a healthy amount of gore and brightly colored explosions everywhere. Jack looks plain, the same types of enemies repeat over and over, and the level designs are simple. But Dead to Rights II has what we'd call an efficient look about it. The visuals aren't great, but they deliver in the areas that matter most. The Xbox version looks cleaner and runs smoother than the PS2, though the PS2 version is comparable. As for the audio, it's just odd. Few games to date have been so rife with cussing as this one, and Dead to Rights II's short little music loops are plain and understated. In fact, of all the different aspects of the game, the music is probably the biggest throwback to the old arcade classics. Additionally, bad voice acting and decent weapon effects abound.

The game's got some unlockable weapons and difficulty modes, plus an instant action mode that just keeps throwing bad guys at you, as if the main story mode was anything different. It's not necessarily something you'll be compelled to keep playing, though, since all the blasting nearly overstays its welcome on the first time through. So Dead to Rights II isn't worth full price, and on top of that, it's a pretty disappointing follow-up to an action game that tried to do more than what most all the other action games were doing at the time. But on the other hand, what the game lacks in cohesion or presentation quality, it makes up for--at least partly--with its raw, angry energy. Through all the nonstop senseless violence that's on the docket here, you'll have to admit the game's got a lot of spirit. So if you like playing video games to release tension, and you don't care about good stories or online multiplayer modes or any of that stuff, definitely rent this one or something. 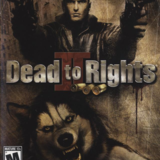