Dead Rising 2: Off the Record Review

Off the Record provides as much entertainment as last year's Dead Rising 2 because it's almost exactly the same game.

Be careful what you wish for. Since Dead Rising's release in 2006, players have been clamoring for a sandbox mode. In Dead Rising 2: Off the Record, you finally have a chance to tear through Fortune City without a leash pulling you through, and it's now clear why such an option was absent in the past. It's boring. Finicky controls and shallow combat have been a part of the series since the beginning, but it was possible to look past these problems because you were constantly pushed from one ticking objective to the next. Once the handcuffs are removed in Off the Record, these quirks become more apparent, and it only takes so long before the thrill of killing zombies dissipates. Story mode isn't much of a draw for series veterans, either, because it's virtually an identical retread of Dead Rising 2. For people who have never touched a Dead Rising game before, Off the Record is as good a place to start as any, but it's far too similar to the previous game to make it exciting for longtime fans or those who have never had interest in these wacky adventures.

After breaking the scoop on the Wilmette zombie outbreak at the end of Dead Rising, Frank West entered a life few are privileged to enjoy. Fame and fortune followed his every step, models hung from his arms like soft salamis, and the world was his for the taking. But any journalist worth his salt knows that the truth is more important than dollars and dolls, so Frank RSVPs "no" to the many party invitations flooding his inbox and sets out to Fortune City to uncover who is ultimately behind the zombie epidemic. Frank seamlessly replaces Chuck in Dead Rising 2's conspiratorial events, appearing in mostly the same cutscenes and conversing with the same characters from the previous game. Despite a new protagonist, the situations are largely the same despite a few twists, and the sense of deja vu makes it difficult to care about how these scenes unfold.

Although story has never been one of Dead Rising's strengths, the enticing structure thankfully returns to bring stress and happiness to your life. Unlike other open-world games, Dead Rising doesn't believe in unrestricted freedom. Situations play out at a specific time, and if you fail to complete objectives before the clock chimes, you not only fail that mission, but you also can't get a satisfying ending. It's punishing, to be sure, and it can lead to frustration for people unaccustomed to such a high difficulty. But once you come to grips with the strict time management, it's tough to pull away from this experience. You have to carefully weigh your actions at all times. You may want to scrounge around for powerful weapons or rescue a survivor on the other side of the map, but you have to constantly keep your eye on the clock lest you find yourself sprinting long distances while the second hand seemingly flies around the dial. Automatic checkpoints are new in Off the Record, and you encounter them each time you enter a new area. Now, if you manage time poorly or die at a psycho's hands, it's easier to reload than before, though people who find this feature distasteful are free to ignore it.

So the core of Dead Rising is intact in Off the Record, which means that it is just as exciting as previous games in the series. The problem is that it's almost identical to Dead Rising 2. This is not an exaggeration. Off the Record takes place in Fortune City, and it's mostly the same as you may remember. There is one new area, called Uranus Zone, that's a purple-toned amusement park, but the casinos, restaurants, and stores from the previous game return unchanged. Weapons and healing items appear in the same spots, psychos return with the same attack patterns and cheesy dialogue, and the same helpless survivors need to be rescued once again. It's jarring just how similar Off the Record is to last year's release, and because of that, it's not nearly as much fun as before. Much of Dead Rising's appeal lies in uncovering its many secrets, but there's no such draw here because everything is located in mostly the same areas. Although there are a few new combo weapons to play around with, it's still smarter to stick with the bat/nails or knife/gloves combos.

The biggest problem with replaying the same environments against the same enemies is that the issues become more noticeable. Dead Rising has never had particularly strong gameplay. Simple combat made it easy to kill enemies but didn't allow for new mechanics or satisfying depth. And the controls functioned, though you had to do a fair bit of coaxing to get the hero to do what you wanted. Previously, you could overlook these faults because you were so engaged in the zombie-slaying, survivor-rescuing hijinks. But now that everything has been recycled, it's harder to ignore the issues that cloak your character like a body bag. For example, something as basic as picking up a specific item can now lead to moments of unabashed anger. Why would you want to pick up a cumbersome newspaper rack instead of the precious orange juice right next to it? And then there are the knockback attacks. Psychos and zombies alike can stun Frank, and it's maddening when you need to quickly move but you're frozen in place. These quirks don't destroy the fun completely, but it's just harder to brush them aside when there's so little new content to distract you.

And the little that is new isn't particularly well done. Sandbox mode stands alongside the Story mode as one of the two ways to experience Off the Record, but it's a poor alternative to the real thing. Here, the element of time has been completely removed, as has any story progression. Instead, you're left in the city with only your crazy whims to guide you. Like killing zombies? Kill away! It's fun for a few minutes or maybe even an hour, if you're the blood-loving type. But after a while, it becomes clear that the combat is shallow. There's no strategy or depth to be found, so once you eviscerate, dismember, and decapitate for a little while, your actions become tiresome. There are challenges to unlock, and these at least give you more specific goals. You may need to reach a certain remote part of the map or murder a set number of zombies, and it can be fun to take part in these endeavors. But unlocking challenges requires you to kill thousands of zombies, and it's not worth mindlessly butchering away to see what new objectives will be unlocked.

Dead Rising is a unique experience that no other franchise quite replicates. But part of the appeal lies in how different it is from other games. There have now been four Dead Rising games released in little more than a year, and this may be a case of too much of a good thing. Off the Record just doesn't do enough to differentiate itself from previous games in the series, so even the most ardent fans should be resistant to dive in again. And those immune to the lure of mass zombie slaying in the past still don't have a worthwhile reason to take the plunge because the Sandbox mode is so tiresome. This is still a well-designed game with a humor and style all its own, but there's not much here that you can't find elsewhere. Off the Record is a good game, but ultimately a redundant one. 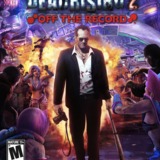