A lack of core changes means this loses some of Dead Rising's novel excitement, but there is still plenty of zombie-smashing fun to be had in this downloadable offering.

Zombies were put on this planet for you to decapitate, dismember, and otherwise brutalize under the guise of keeping your brain from being eaten. Dead Rising 2: Case West is the third installment in the zombie-killing franchise released in the last four months, and though it's still sadistically fun to thrash these unfeeling beings into a bloody pulp, repetition has cast a shadow on your murderous hijinks. Nothing of consequence has been added to this downloadable offering to separate it from previous Dead Risings, so it often feels as if you're going through the motions in a new environment instead of investing all of your pent-up rage into disposing of these decaying monsters. The core elements that define the Dead Rising experience--a ticking clock, a bevy of weapons, and irreverent humor--are well represented here, and the inclusion of original hero Frank West is a great addition for longtime fans. Just don't expect many tweaks to the formula. (Please note: The following text includes a mild spoiler for those who haven't played Dead Rising 2.)

If you were persistent enough to get the S ending in Dead Rising 2, ignore that outcome; Case West takes place immediately after the A ending. Chuck's daughter was ferried away by a helpful helicopter, but the framed stuntman is still trapped in a hotel elevator with eager ghouls closing in fast. Cue Frank West, the gruff reporter from the first Dead Rising, always willing to save a potential victim if it helps him get a scoop. Frank and Chuck decide to sneak into the headquarters of the company that makes Zombrex, the drug that keeps the infection from spreading for a few hours, to prove this evil organization is behind the latest outbreak. Having Frank back in the mix is welcome because his devil-may-care attitude meshes wonderfully with Chuck's more calculated efforts. Unfortunately, the story abruptly ends just when it's building up steam, and aside from a few obvious nods to Frank's eventful past (he's covered wars, you know), there aren't many memorable moments.

The entirety of Case West is played cooperatively, either with a buddy over Xbox Live or with an AI pal fighting alongside you. In single-player mode, you control Chuck, and the computer takes charge of Frank, and it's handy having a willing killer along for the ride to help you clear out teeming creatures. Frank is invincible, so you can arm him with the weapon of your choice and plow through the undead with ease. Unfortunately, you can play as Frank only in co-op play. Chuck and Frank have different melee moves, so it's strange that you're restricted to just one character in single-player. Also, if you invested hours in Dead Rising and its wonderful sequel, you're in for a bigger disappointment: nothing carries over. You start at level 40 (with a cap of 50) no matter how much progress you made, and you can't even take your new clothes and weapons into Dead Rising 2's world. The final problem is that Frank's camera makes its return from the first Dead Rising, but its implementation leaves a lot to be desired. Your pictures are no longer rated (brutal, erotic, and so on), nor are there opportunities to capture telling character reactions. The only tangible task is to snap shots of tiny stickers hidden in the environment, which count toward an achievement but little else.

These small problems aren't annoying for long; once you take your first step toward mass genocide, you'll forget all about them. Case West takes place inside of a medical laboratory, and it's much bigger than the last downloadable game, Case Zero. Weapons--both new and returning favorites--are spread all over the premises, and there are plenty of workrooms where you can construct grisly combination weapons. Some of the most disturbing offerings don't even require duct tape this time. A bone saw can cleave straight through a standing zombie, and you can send a shock-wave blast by slamming down an impact hammer. The new combo weapons are just as gratifying, letting you shoot volatile chemicals or tase zombies with a floor-buffing cattle prod. This is a horrifically violent game, and it's a blast to scrounge up every weapon to see what effect it has on your attackers.

Of course, there's a lot more to Case West than just butchering brain munchers. Strict time limits force you to move with a purpose, because if you can't finish an objective before the bell rings, it's an automatic game over. This emphasis on being at the right place at a specific time does limit how much carefree fun you can have, but it's not nearly as punishing as it sounds. You can get anywhere in the facility in a couple of minutes, so it's pretty easy to breeze through the story your first time through. The tricky thing is saving all of the survivors while completing the core missions. Survivors are handled slightly differently in Case West than in the previous games in the series. Because you broke into a secure facility, you don't have a safe house to whisk survivors away to. Instead of dragging them through milling zombies like before, you have to give them whatever item they desire and then leave them to fend for themselves. For instance, one man asks for a machine gun so he can shoot his way out alive, so you have to be prepared with specific tools if you're going to rescue everyone. Juggling survivor missions with the core story requires careful planning and efficient movement and makes Case West worth replaying a few times until you figure out the perfect way through to save everyone.

You might be worried that a medical laboratory doesn't lend itself to the wackiness that has defined Dead Rising from the beginning, but you would thankfully be quite wrong. Even without stores containing all sorts of makeshift weapons and blush-inducing clothing options, Case West keeps the humor flying. Clothing is still one of the main sources for guffaws. Lab workers keep the darnedest things hidden away, so you might happen upon a Dr. Wily-inspired wig or a hospital gown that doesn't leave much to the imagination. New items keep this lighthearted charm in mind. Bashing a zombie with a specimen jar containing the head of what may have been his dearest friend or riding around the facility on a silly-looking one-wheeled contraption is always worth a laugh. And then there are the moments that aren't overtly funny, but when you consider the situation, they become gloriously awesome. Who doesn't enjoy eating a submarine sandwich that was doused in zombie blood only moments earlier?

Too much of a good thing does exist. Just about everything in this $10 XBLA game is really well done, and there are enough new weapons to surprise even the most hardened zombie-killing veteran. But franchise fatigue has unfortunately set in. As strange as it is to say, there have been too many Dead Rising games released in the last few months, which lessens the impact of the mutilating and time-management fun that exudes from every orifice. Case West still offers loads of enjoyment, and because you don't even need the Dead Rising 2 retail disc to play it, even novices can enjoy the anything-goes brutality. But if you've already invested hours into the other games, there aren't enough new elements here to make it exciting all over again. 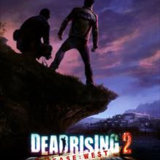