Combining fantastic graphics and above-average gameplay, Dead or Alive is a fun and challenging fighting game well worth picking up.

Dead or Alive was originally released as an arcade game that ran on Sega's Model 2 board (read Virtua Fighter 2) some time ago. A perfect arcade port later appeared on the Saturn in Japan and was considered one of the better fighting games on the system. The title has of course recently resurfaced on the PlayStation with a fresh new look, with new character models that look significantly better than the Saturn and arcade versions.

The game features nine playable characters from the get-go with two more attainable via total completion of the game. Every time you beat the game you are rewarded with a new outfit for one of the characters. There is a total of 84 costumes in all, which range from your typical karate gi to scuba gear. The design of the characters themselves isn't groundbreaking by any means, in fact some look suspiciously similar to characters from the Street Fighter, Tekken, and Virtua Fighter series.

Dead or Alive's fighting engine is obviously influenced by Sega's Virtua Fighter series, with its punch, kick, and hold button setup. The hold button is just that, a button that allows you to get your opponent in grappling holds. This is really kind of cool because you can counter holds and attacks and then reverse counters on top of that, so you sometimes can get an awesome Jackie Chan-style grappling match that goes back and forth three or four times till someone messes up and pays the consequences. It may sound complicated, but since the special moves are all fairly simple to perform, anyone can easily learn how to play.

Graphically, Dead or Alive is one of the nicest-looking PlayStation games to date. The character models are nearly seamless, meaning that the 3D characters don't appear to be blocky or made up of polygons. Instead, the characters have a very smooth, almost skinlike quality to them. Mixed with the fast and fluid motion of the character animations, this gives a stunning sense of realism. Apparently the designers went a little too far when it came to the motion design of the female characters though, because they made it so their breasts bounce while fighting. Honestly, if it weren't for the fact that they keep on bouncing well after they should, it may have been seen as a commendable effort for the designers' keen attention to detail. At any rate, the breast-bouncing can be turned off or on in the option menu. The sound effects and accompanying background music, while not up for any awards, get the job done.

Overall, Dead or Alive delivers a realistic fighting experience. Combining fantastic graphics and above-average gameplay, Dead or Alive is a fun and challenging fighting game well worth picking up. Hopefully, it won't be overshadowed too much by the US release of Namco's Tekken 3. 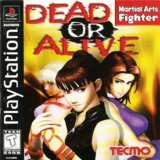