Painting the town red, blue, or any other color is a lot of fun in this charming Wii platformer.

Children often find joy in taking crayon to paper and turning the blank page into a vibrantly colorful mess. The act of bringing color to what was colorless is delightful and tangibly rewarding, yet as we grow older, this activity tends to lose its charm. De Blob, a great new platformer for the Wii, takes this act and makes it rewarding again in a way that can be enjoyed by players of all ages.

The story of de Blob is told through a series of excellent movies that manage to be funny and smart without a word of dialogue. The evil INKT Corporation, led by the dictatorial Comrade Black, has drained all the color from Chroma City, turning it into a drab, monochromatic metropolis. It has also turned its once diverse and colorful citizens, the Raydians, into sullen, homogenous Graydians. Blob joins forces with a resistance movement called the Color Underground to bring color back to Chroma City and liberate its people. In its own lighthearted, rated-E-for-everyone way, the game deals with the theme of political oppression, and the whole game can be viewed as one big visual metaphor about the role of art in a free society. But the game never bludgeons you with this stuff, so you can also just take it at face value as an entertaining little tale and leave it at that. In any case, the mischievous, versatile Blob is a terrific hero who oozes personality (among other things), and you'll quickly grow attached to him, as well as his fellow Color Underground members.

The basic goal of each level is to paint part of Chroma City and, by doing so, gradually free the city from the colorless grip of the INKT Corporation. As you paint the area, the color energy level (or, if you want to be old-fashioned about it, your score) increases, and you'll need to reach a certain total in each section before you can open the gate to the next. There's always a clock ticking down in Story mode, but this is not a high-pressure game. You generally have plenty of time to leisurely make your way through each section at your own pace, which is a good thing. It keeps the focus on the game's most enjoyable aspect: painting the town.

Blob starts each level without any color himself, but thankfully, Chroma City is crawling with paintbots, which are spiderlike robots with tanks of red, yellow, or blue paint on their backs. By smashing into one of these, Blob becomes coated with paint. Each paintbot you smash nets you 10 paint points up to a maximum of 100, which work both as his health and as his attack strength, as certain foes require a certain number of paint points to defeat. (Blob also gets bigger as he absorbs more paint.) Blob paints in broad strokes; simply making contact with a building while you're wearing a coat of paint is enough to cover every inch of the building's surface in that color, so you'll quickly turn drab, gray parts of town into vibrant neighborhoods again. Zooming around restoring color to the city is a lot of fun, at least partially because the visual results of your actions are so dramatic and so enjoyable to behold. Wiping out the monotony of INKT's rule is so satisfying that you'll naturally find yourself wanting to cover as much of the city in color as you can--not just the easily accessible areas, but every INKT propaganda billboard overlooking the city and every blimp soaring overhead--leaving no sign of INKT's oppression.

Throughout each section of the city are challenges that give you specific goals to fulfill, lending some structure to an otherwise unstructured experience. There are four types of challenges. Races require you to hit a series of checkpoints in a limited amount of time. Combat challenges involve taking out specific INKT soldiers or equipment. In landmark challenges, you must hit the weak points of specific structures that INKT has commandeered with large quantities of a given color of paint. Some of these structures are protected by traps, including spikes and electrified panels, which makes reaching the weak points a bit tricky. Restoring these landmarks to their former glory is often a rewarding surprise in and of itself. It's a treat, for instance, to do away with the soulless Church of INKTology, only to find that the building is truly a shrine to skateboarding, with Raydians happily riding the ramps on the rooftop. Not all challenges are created equal, however, and one in particular really loses steam fast. In it, you are assigned to paint specific structures in specific colors. You might need to paint one cluster of buildings green, another orange, and another purple, for instance, all in a relatively short amount of time. As much fun as it is to paint the town, being told exactly what to paint and what color to paint it can feel a bit limiting.

You move Blob around with the thumbstick on the Nunchuk and swing the remote down to jump. Blob gets around by rolling, and maneuvering him around Chroma City is a breeze. In addition to these standard moves, he's also capable of running along walls and jumping off of them. These more advanced skills are a bit trickier to pull off, but once you get the timing down, you'll be bopping your way all over the place, though Blob has a frustrating tendency to get wedged into tight spaces, particularly when he's absorbed a lot of paint. Combat is also simple but fun. You target your enemies with the Z button and then jump on them to smash them. Blob hits his targets with unerring accuracy, and targeting distant paintbots or INKT troops is often a necessary technique for leaping across greater distances that Blob might not otherwise be able to accomplish. If Blob is hit with the nasty ink of INKT, his paint points will quickly plummet, and he'll need to find a source of water to wash himself off right away. Although most enemies aren't much of a threat, they can certainly be a nuisance. The most interesting type of INKT soldier is the Elite Inky. Decked out in a colored uniform, these soldiers can only be squashed by Blob when his color matches that of the soldiers. For the most part, de Blob is quite an easy game, though the game's one and only boss fight at the end--while not extraordinarily difficult--is surprisingly tough in comparison to everything that precedes it.

The single-player mode is definitely where the meat of the game lies, but the gameplay translates very well to multiplayer action as well. The game has three multiplayer game modes, each accommodating up to four players. In each one, your goal is to paint more of the level than your opponents. In the Paint Match mode, you can paint over other players' colors, whereas in Blob Race, each building can only be painted once. Finally, in Blob on the Run, only one player can paint at any one time while other players find and smash that blob to acquire the ability to paint. The more people you have on hand for these modes, the better. The areas feel a bit large for two players, but with four players, the action can really get frantic as players zoom around the city, vying for the top spot.

The game's presentation is outstanding. While it's not technically impressive, the artistic design of the visuals is delightful and a large part of what makes de Blob such a joy to play. Watching the city gradually go from oppressive gray monotony to vibrant colorful freedom is rewarding. All of the characters, even Comrade Black and his INKT goons, also have an infectious charm. The sound is terrific as well, with the characters speaking a cute and funny gibberish language. The funky music selections, which you choose from before each level, provide dynamic accompaniment to the action, exploding with sound each time you paint something and building up gradually as color is restored to more of the area.

There's a good deal of content in de Blob. While you have a lot of freedom in terms of how much or how little time you spend completing each of the game's 10 story levels, you'll probably spend roughly an hour or so on each one. Because the game tracks your progress in every area, you may want to go back to complete more challenges, paint more billboards, or do any number of things you may have missed the first time through. In addition, there's a Free Paint mode if you find yourself wanting to color the town without any pesky time limits or INKT forces to bother you. There are also a good number of one-off secret missions that you unlock as you progress, which you can complete to unlock concept artwork, movies of the game's development, and the like. The small number of challenge types means that the action gets a bit repetitive after a while, but de Blob is still an invigorating explosion of color that anyone with an interest in platformers should absolutely check out. 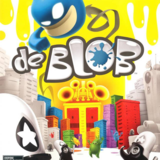