Infuriating controls and frustrating platforming sections are among Dawn of Mana's many shortcomings.

If you're a Mana fan, you should know right off the bat that Dawn of Mana is not a role-playing game. Instead, it's an action adventure with the scantest of RPG ingredients. But frankly, it doesn't matter much whether you're a series veteran or a newcomer. Either way, it's not a good game, barely able to deliver on a number of good ideas and crippled by poorly implemented gameplay mechanics. Just when you think you might be having fun, Dawn of Mana does everything it can to squash it--or in this case, grab it and fling it against crates and boulders.

The story isn't one for the ages, but it's pretty interesting once things take off--not so much for its originality, but for a good cast of characters that lend a lot of charm to Dawn of Mana's take on the preteen-boy-saves-the-world formula. In this version, the island of Illusia is under siege by the evil Stroud and the forces of Lorimar. Stroud is looking for the entrance to Malvolia, which is hidden in the great forest and protected by the great tree Treant. It's up to young Keldy and his best friend Ritzia to save the world, which naturally involves slaying a bunch of fantastical creatures and moving from one checkpoint to the next. Along the way, Keldy is joined by an adorable fairy named Faye, who is a source of magic as well as a number of delightful lines that she quips during the course of battle.

Dawn of Mana isn't devoid of good ideas; in fact, it's brimming with them. Keldy wields a sword infused with vines from the mana tree, so it does more than just slash and stab: It also shoots out tendrils that you use to fling objects and enemies. It's an interesting use of the Havok physics engine, and when it works, it's pretty amusing. You can pick up rocks and barrels and throw them around, which doesn't do much damage to your enemies, but causes them to panic and allows you to move in for the kill. The best moments in the game involve picking up monsters and tossing them into other monsters, which often results in entertaining displays of confused foes running around while you slice them into bite-size pieces.

On the other hand, combining the sensitive physics with imprecise controls and a useless targeting system is a recipe for disaster. While you can target monsters and objects, you can't easily cycle through them, so it's practically impossible to select a particular object when there's a bunch of them on the screen. This is probably why you can also zoom in to a first-person view and target individual enemies with a reticle, but doing so is so slow and time consuming that it's useless. As a result, you'll be shooting out your vine and hoping for the best--though your high hopes rarely come to fruition. Even when there is an item targeted, the vine will occasionally shoot out and firmly attach itself to nothing at all, giving furry blue trolls plenty of opportunity to beat you to a pulp. When you do grab something useful, flinging it into the right enemy is tough to pull off. Or you might just toss it into Keldy himself, throwing him backward and into harm's way.

The control struggles aren't limited to the targeting and physics. General movement is floaty and inexact, yet Dawn of Mana is loaded with insane platforming sequences that involve jumping to great heights, getting hit by a boulder dropping from the heavens (as boulders generally do), and falling to the ground. In other sequences, you have to precariously perch on tiny ledges while fending off attacks from all sides. Not only do a number of attacks knock Keldy back a good distance, but each swing of his sword moves him forward a fraction of an inch, which will cause him to fall. Not that destroying these enemies and trying again does you much good, since most foes will respawn anyway. There's also the issue of the camera, which tilts around in the middle of jumps and gets stuck in the most awkward of places. Almost every chapter features a long, demoralizing sequence of jumping and dropping, and not a bit of it is any fun.

You've got some spells and ranged attacks to work with, too. Keldy uses a slingshot to fling elemental orbs at monsters, which panics most of them and may have other nifty results. They also come in handy against end-chapter bosses, which need to be stunned and further softened up before your attacks have much effect. Keldy's fairy companion Faye has access to a small assortment of spells, which you can use to heal up, set your shrub sword aflame, and more. All in all, it's a good selection of ways to stun monsters: Fling them into each other, set them on fire, roll boulders onto them, and what have you. Yet most damage comes from your sword, and with the all the control issues getting in the way, you'll still be pounding on the attack button most of the time.

Dawn of Mana's RPG elements are so thin as to be almost nonexistent. There's a simple leveling system here, but you're inexplicably bumped back to level one at the beginning of every chapter. Gaining a level boosts your health and mana gauges, but more importantly, it lets you grab larger enemies with your vine, or even twirl objects around and bash enemies with them. Faye also levels up, which earns you new spells. Yet you can't purchase a new weapon and you'll never equip an item. The closest you'll come is earning emblems by getting high marks after the completion of a chapter, or by gathering medals or purchasing them at the general store. Emblems offer you stat bonuses but can be equipped only at the beginning of a chapter, and a huge number of them are available only if you meet wildly difficult requirements.

The possibility of earning new emblems with high marks at the end of chapter is one of a few attempts at replay value. The battle arena is another. As you complete chapters, you unlock arenas where you can practice your skills against a roomful of baddies, which minimizes the platforming difficulties but keeps intact the other annoyances. Your reward for playing is potentially an emblem, but you'll play mainly for the money. The thing is, there's not much to buy. Aside from the emblems, you can purchase a pet to join you in arena play. Or you can buy in-game music or cinematics for viewing at any time, which doesn't seem like much of a reward. And if for some odd reason you can't get enough Dawn of Mana even after the dozen-odd hours it takes to complete the story the first time, there are also hard and ultimate difficulty levels to unlock.

At least it looks pretty. Characters are colorful and drawn in the familiar Mana style, and boss characters are animated well and pretty imposing. There are also a good number of terrific cutscenes to gawk at. Environments are generally colorful, though some of them are somewhat bland and bare. There are also a lot of nice effects, such as the vibrant display of particles when a gnome orb finds its mark. The frame rate will drop noticeably at moments like this, though it doesn't affect the gameplay much. The nice soundtrack is the highlight of the sound design, and the voice actors do a generally good job with their lines. The cries of battered goblins and Keldy's grunts get old quickly, however.

You get the feeling that Square Enix spent more time coming up with clever ways to use physics in Dawn of Mana than they did making it enjoyable to play. Tossing things around to make enemies panic is a pretty cool idea, but torturous platforming, semifunctional targeting, and lax controls hinder any sense of enjoyment you're likely to get out of it. Dawn of Mana is a crushing blow to franchise fans and a game you should steer clear of. 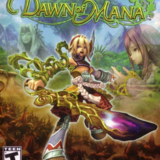 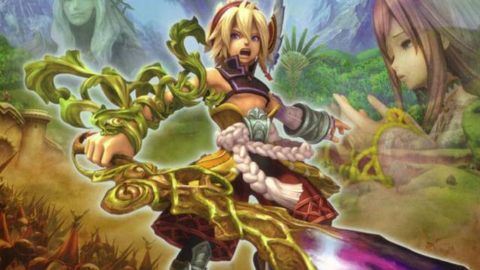 The first true Mana sequel in a decade, Dawn of Mana reveals the origins of the legend behind the Mana Tree and the Sword of Mana, and presents itself in full 3D.