The graphics in Maximum Remix are roughly identical to the first game, so you're stuck with muddy, ugly textures and quite a bit of texture warping.

Dave Mirra Freestyle BMX was the first PlayStation BMX game on the scene, released back in September of 2000. While it had a reasonably innovative trick system when compared with the skateboarding games that were coming out around the same time, the game really fell apart in the physics department, as it let you land tricks that you shouldn't have been able to walk away from. Maximum Remix jacks up the engine and slides a smattering of new levels and challenges in, but the ugly graphical glitches and continuingly laughable physics overshadow any of the other improvements made to the game.

While the game has its share of modes, including free-ride and practice modes, the main focus of the game is the proquest, the game's career mode. In the proquest, you choose one of several professional BMX riders and start out with one level, one bike, and one costume. Each level has three sets of goals. The first two sets are mandatory to proceed through the game, while the hard-core challenges unlock optional rewards. While the game does contain a few new levels, it also contains the same levels as the first release, though many of the goals have changed. The goals aren't terribly out of the ordinary at first. Each of the first two goal sets contains a score goal, and other goals include grinding a certain distance, transferring between two ramps, walltapping items such as alarm bells, and jumping over specified gaps. Some of the goals get pretty specific, asking you to do a specific trick over a specific building. To help you locate where the level goals are, the goal will appear at the top of the screen when you are near the portion of the level (a specific building, a sign that must be walltapped), and the ramp or item related to your goal will glow or a wireframe box will appear around it. However, sometimes the goals get a little too specific, asking you to jump over a certain building in the level. If the graphics and textures were sharp enough to let you discern one building from another, this wouldn't be a problem, but finding the games shack in the Carnival level is a little difficult, considering that all the structures look fairly similar. You would think the blinking goal indicator would help here, but since the goal is to jump over the building, the building itself isn't part of the goal--so it doesn't glow.

The control in the game is roughly the same as the original Dave Mirra, but it feels a bit looser, making it easier to pull off modified tricks. The trick modifier system is pretty neat. First you do a trick with the square button, such as a tabletop or a superman. Then, you immediately do a modifier with the circle button. Some of the modifiers include bar spins, no-handers, one foot one-handers, and nothings. This combines your first trick with the modifier, so you can do a seat grab tabletop, a no-footer turndown, and so on. This allows for some impossible combinations that look absolutely hilarious, such as a no-hander superman, which totally separates you from your bike--yet you and the bike still spin in tandem, even if you switch rotation directions in midair.

The graphics in Maximum Remix are roughly identical to the first game, so you're stuck with muddy, ugly textures and quite a bit of texture warping. At least the rider animation is decent, and the wrecks are quite cool. The soundtrack is roughly the same as the original, containing songs from Cypress Hill, Social Distortion, Millencolin, Rancid, and Pennywise, among others. The game also comes with a separate soundtrack disc.

Maximum Remix fixes a couple of the problems that the original had: For example, the control feels a bit looser and the level goals are a bit more interesting. But it's really held back by buggy physics, such as a bug in the game that lets you skid forever and the "feature" that lets you hit the grind button anytime you're within two or three feet of a grindable surface and watching as your bike magically tilts and twists around to accommodate the surface. While it seems obvious that the planned sequel for the GameCube, Xbox, and PS2 will fix up the game's graphics, fixing up the physics and level design is what will really make it a contender against the likes of Mat Hoffman's Pro BMX. 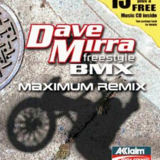