Not straying from the script established in the original Dave Mirra, the game's focus lies in the career mode, in which you take one of 14 pro BMX riders through the game's 10 levels, completing a variety of level challenges along the way. The basic goals remain essentially unchanged, with the standard high-score, long-grind, and big-air challenges making a return. Each level is populated with other pro BMX riders, who will lay down the level's more difficult challenges, most of which consist of executing tricks on specific items in the level. This character interaction helps to immerse you in the level. These challenges are actually from the last two iterations of Dave Mirra, and the other riders essentially serve as window dressing here. You'll also find a variety of motorized vehicles rolling around the levels, each of them a grinding opportunity. The two-player modes have been expanded on greatly and now offer 13 different game types, such as a high-score challenge, a HORSE variant, and a wipeout mode in which you try to pull off the nastiest, most painful bail possible. The game also includes a hefty level editor, comparable to the one found in Tony Hawk's Pro Skater 3. You're given a choice of several level themes, a large open space, and a boatload of objects with which to design your level. Using the GameCube controller to design levels can be a bit clunky, but that won't stop those determined to design their dream BMX track.

One of the game's biggest improvements on the original Dave Mirra is larger level size. The Woodward Camp level, for example, essentially takes four levels from the original game and rolls them up into one. Other than the size of the levels, however, the level design is pretty much business as usual, with status quo courses set in old industrial train stations and busy urban centers, though the swamp and Arizona desert levels do provide a welcome change of pace.

Balanced control has always been a bit of a trial for previous Dave Mirra games, and unfortunately, it still is. Dave Mirra 2 employs the beefed-up control scheme from Maximum Remix, which uses the A-button for jumps, the Y-button for grinds, the X-button for bike and body tricks, and the b-button for trick modifiers. The trick modifier is a suitable wild card, as it exponentially increases the game's trick catalog, but it also lets you perform physically impossible tricks, like the physics-defying 360 No-Handed Superman. The game still suffers from magnetic grind rails and easily landed tricks, and the collision detection and environment clipping are way off, making it possible to put yourself inside an otherwise inaccessible building or else right through metal rails with a well-placed bail. Suffice it to say, the physics in general lack polish, and considering it's the area that has been begging for improvement through the life of the series, it's disappointing to see the same flaws rear their ugly heads yet again.

The PlayStation 2 version of Dave Mirra 2 made significant graphical improvements on its PlayStation and Dreamcast predecessors, but it still had its fair share of problems, and it never really seemed to push the abilities of the hardware. Some of the graphical flaws of the PlayStation 2 version have been cleaned up for the GameCube, and the graphics in general are more polished. The lagging camera hasn't been fixed entirely, though it is a notable improvement. Slowdown is all but nonexistent. The bad aliasing that the PlayStation 2 is so infamous for is history as well. Developers have commented on how easy the GameCube is to program for, especially when bringing PlayStation 2 code over. Unfortunately, this leads to port syndrome, where the game will look virtually identical across platforms, regardless of any strengths a certain console might have over another. Aside from fixing what was broken in the PS2 version of Dave Mirra 2, developer Z-Axis has really done nothing to showcase the abilities of the GameCube.

Any action sports title worth its mettle includes a soundtrack built on licensed music, and Dave Mirra 2 is right up there. Current pop-punk darlings Sum 41 contribute a track, as do Methods of Mayhem, Rage Against the Machine, Sublime, A Tribe Called Quest, Fenix TX, and, strangely enough, The Cult. The environmental sound is generally passable, though for some reason, the sound of your bike's gears moving is especially noisy in the GameCube version of Dave Mirra 2 and can be distracting to the point that you'll want to kill the environmental sound entirely.

Dave Mirra Freestyle BMX 2 does not suffer from any single huge, crippling flaw; rather, a handful of smaller problems plague the game and keep it from achieving BMX greatness. If you're looking for some BMX action, you could certainly do worse, but Acclaim and Z-Axis could certainly do better. 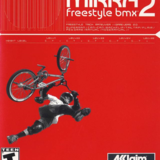