Living in the world of Dave Mirra BMX Challenge would be a blast. Bicycles are the only source of transportation. Every place you go--from schoolyards to shipyards--seems specially designed to make the most of your hobby. The laws of physics are enforced only on a case-by-case basis. And women frequently ride BMX bikes while dressed as schoolgirls. Yep, living in this world sounds like a hoot. Unfortunately, playing in it--in Dave Mirra BMX Challenge for the Nintendo Wii--is anything but.

BMX Challenge is based on the PSP game of the same name from 2006 and manages to incorporate many of the same qualities from the handheld game, including that game's haphazard physics implementation, uninspiring course design, and atrocious visuals. In fact, apart from having to wind your way around more pedestrians who appear throughout the various courses in the game, it doesn't look as if much has been done at all with BMX Challenge's visuals. Ugly, vaguely blurred textures can be found everywhere, and pop-in seems to run rampant on certain levels. That's in addition to character models that are just as hideous as they were on the PSP, as well as ho-hum trick and rider animations, and rag-doll crashes that are wholly unconvincing at best. Throw in dull, repetitive audio (both musically and otherwise), and you end up with a game that has one of the poorest presentations of the year.

You control BMX Challenge with the Wii Remote only. To pedal, you press the 2 button, and you steer your bike by holding the remote horizontally and tilting the controller left or right. It takes a few moments to get used to but, to the game's credit, steering is pretty responsive once you've been acclimated to it. To jump off a ledge, you simply flip the remote up quickly. Tricks are handled with a combination of the directional pad and the 1 and 2 buttons. It's a shame that there aren't more tricks that involve the Wii Remote's motion-sensing features but, at the very least, you'll have a lot of tricks at your disposal with the system as it is.

The heart of the game's single-player experience is the career mode, where you compete in both race and trick events. You start out by creating a rider based on archetypes so clichéd they'd make John Hughes proud ("nerd," "hip-hop," "punk," "urban," etc.), and then continue on to the events proper. During these career events, you earn stars based on where you place in the race, as well as for any trick and style points you rack up. Your star total will unlock new events as you progress. The star totals needed to open up many of the later courses in the game on "pro" level require you to not only finish first, but also to finish in style by racking up tricks and taking advantage of the often insane physics on display in the game.

Just as in the PSP game, grinding rails is one of the best bets for racking up trick points. It helps that the game's grinding mechanic warps you to practically any edge with just a press of the 1 button. It also helps that the balance meter is very forgiving, even when you're grinding around 90-degree corners, which looks and feels amazingly stupid. A couple of other wonky physics bonuses just to hit the point home: Periodically you can move in reverse at full speed, and at other times, you will slow to a crawl while pedaling for no good reason. In all, you'll have an easier time earning a real degree in physics than trying to parse its implementation in BMX Challenge.

BMX Challenge's courses run the gamut from fairly authentic (racing around a schoolyard) to the utterly preposterous (grinding and tricking your way around the deck of an oil tanker). However, you're bound to be disappointed with the track designs, which feature often ill-placed jumps and obstacles that will send you heading straight for a crash. Worse yet, despite the course path switching up at the midway point of a race, the tracks are short, which means you'll be racing the same ugly scenery as you turn multiple laps. Hidden jumps (edgily referred to here as "phat" gaps) are strewn throughout the courses for you to discover, as well as unlockables such as new bikes and accessories for your career-mode riders. The game also includes split-screen multiplayer for up to four players across various trick and race events.

Our biggest complaint with the PSP game was its lack of difficulty. That's been addressed to an extent in the Wii version of BMX Challenge--the increased dependence on trick points during race events adds some much-needed challenge to the game. Unfortunately, what's still missing is any sense of inspiration, authenticity, or fun in the game's extreme-sports approach. "Do not attempt the suicide flip at home," the game warns you on a loading-menu screen, referring to one of the deadlier-looking tricks you can pull off. It's a good piece of advice, and one we'd like to extend to include the entire game. 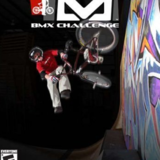