If you're looking for an intense shooter experience, Darkwatch will not disappoint.

Darkwatch, originally announced in 2004 by Sammy Studios, has had a development path as tumultuous as the journey in the game by its protagonist, Jericho Cross. The good news for those interested in Darkwatch's hybrid horror-Western theme is that the game seems no worse for the wear despite the behind-the-scenes chaos. If you're looking for an intense shooter experience, Darkwatch will not disappoint, offering crisp gameplay, an excellent presentation, and a varied campaign. It's also refreshing to have a shooter with a theme that isn't completely played out, and though a few primary aspects hold it back--including pedestrian multiplayer design and a brief campaign--Darkwatch is well worth checking out.

You'll take the role of Cross, a man of few words, who makes his living by robbing trains. You're out for one last score, but unfortunately, you pick the wrong train. Upon blowing open the safe, you end up releasing the soul of Satan's son, Lazarus, who curses you to become a vampire. He also unleashes hordes of undead to plague the Arizona desert. The only organization that can stop him is a secret army called the Darkwatch. Cassidy, one of the army's "regulators" (deputies), witnesses what you did on the train. You'll spend the beginning of the game by her side as she leads you back to the safety of Darkwatch. This is when you begin to understand the new powers you have as a vampire.

You'll of course have access to a variety of different weapons, ranging from standard pistols and rifles to more exotic ones, such as an exploding crossbow and a rocket launcher. Each gun offers different strengths and weaknesses, and each one is fun to use in its own way. Since the enemies in Darkwatch take location-based damage, it's possible to blow off the heads and limbs of most enemies with the more powerful guns. What's more, each gun also offers you a powerful melee attack, and the weaker enemies in the game will actually go down with just one satisfying strike from the butt of your shotgun or rifle. The power of these attacks and pacing of the gameplay make melee a viable option, particularly in caves or other close-quarters areas. You'll also have access to dynamite that you can throw, which serves the same role as a grenade. Stationary turrets are also sprinkled throughout the later levels. Cross can carry only two weapons at a time, so you'll often need to make important tactical decisions about which guns you want to pick up and drop as you make your way through each of the game's single-player missions. It all adds up to fast-paced, visceral gameplay that will keep you entertained throughout Darkwatch's single-player missions.

Even with such an impressive arsenal at your command, Cross will need to also rely on his vampire-related powers to stay alive. One power is the ability to double-jump and control your direction in midair, which is mainly useful for getting up on rooftops or jumping from ledge to ledge. Don't worry, though, as there isn't any real platforming to speak of in the game. Another vampire-related power is the blood shield, which acts more or less like the personal shield in Halo. You'll be able to take a bit of damage to your blood shield, and then get back behind cover and let it recharge before taking actual damage to your health. Blood vision is another useful skill that lets you see enemies and power-ups highlighted onscreen.

Many of the enemies will drop blood capsules, which replenish your health and also charge up a separate power meter, which then lets you unleash special vampire powers once it's filled. There are eight total powers in the game, four that are good and four that are evil, and they are more or less analogous to each other. These powers are unlocked as you play through the campaign. As you come across innocent victims who've also been hit with Lazarus' curse, you can choose to cleanse their souls or devour them. As you make these binary choices, you begin building a reputation as either good or evil. And the more factional your reputation is, the greater your powers will be, so you're encouraged to always stick with one side until you've maxed out your powers there. This aspect of the game probably sounds more interesting than it actually is, as the choices you make don't really affect the story, aside from one major choice you make toward the end that determines which one of the two different endings you'll see.

The single-player campaign of Darkwatch is varied, but definitely not lengthy. A single play-through shouldn't take more than 10 hours for most people, and even if you went back to the mission that branches the storyline and replayed from there to see the second ending, it would only add about an hour or two more to your gameplay time. The good news is that while the game is short, it's pretty fun while it lasts. There's a good variety of monsters to fight against, ranging from scythe- and gun-wielding skeletons and zombies, to banshees that float around high in the air, to blood-spitting demons. The endgame boss fights are also fairly challenging, but not overly frustrating, as the midpoint of each fight acts as a checkpoint.

Speaking of checkpoints, Darkwatch's missions include a liberal amount of them, which is good as it helps keep the action flowing. The designers also did a good job of keeping the actual missions varied. A couple of missions have you fighting on horseback, including one where you must eventually try to jump onto a train. Another mission has you driving a heavily armed buggy, which lets you run over lots of skeletons, a la Army of Darkness. Yet another is set in daylight, where your vampire powers are useless. This is a particularly intense level, as you desperately fight from shadow to shadow in order to maintain your shield and other abilities.

Darkwatch's presentation values match the excellence of its gameplay. The graphical style has a very comic book feel to it, with the slightly exaggerated proportions of Cross and the other Darkwatch team members. The other character models in the game are well detailed and animate nicely. Perhaps one of the nicest touches is the location-based damage. There's nothing in the game quite as satisfying as seeing the bad guys literally come apart from the limbs. That is, unless you prefer the fun rag-doll effects from dynamite and TNT explosions. The generous number of cutscenes advances the story between most of the missions, and as for any graphical differences between the two versions of the game, there really aren't any. Both the PS2 and Xbox games look near-on identical, so you're not missing much graphically if you go with one version or the other. The game's sound quality is also very good, with kitschy Western tunes as the soundtrack, and impactful sound effects punctuating every explosion and gunshot. Though Cross oddly never utters a single word throughout the game, the extensive voice work for the other characters is noteworthy. Video game veteran Jennifer Hale voices your guide, Cassidy, and Charmed vixen Rose McGowan lends her voice to Tala, who plays your sultry sidekick later in the game.

Unfortunately, it seems that the work that went into creating such a compelling single- player campaign in Darkwatch was not matched for the multiplayer aspect. The game offers online competitive play for up to 16 players over Xbox Live, as well as split-screen action for offline play (which is the only multiplayer you can get on the PlayStation 2). There is a solid selection of maps, based on levels from the single-player game, as well as original ones designed specifically for multiplayer. Only a small handful of game modes are offered, which include your usual deathmatch, team deathmatch, and capture the flag, rendering the multiplayer aspect of the game much like any other first person shooter. You're pretty much just running about looking for the best weapons to blow away your other enemies who are also running down the weapon spawns. The only unique game mode is something called soul hunter, where players run about the map collecting blood in order to fill their blood meter before the other players do. None of these modes are especially great, so if you are looking for a game specifically for the multiplayer action, you may want to give pause before you consider Darkwatch.

Despite the lack of satisfying multiplayer, Darkwatch's enjoyable single-player campaign and satisfying run-and-gun action make it an appealing shooter that's easy to recommend. The game's excellent presentation and unique style should also make it attractive for action fans seeking a shooter that doesn't rely on one of the tried-and-true settings, but still offers good, visceral action. 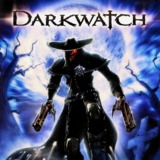