Darkstalkers Chronicle is probably the best portable fighting game ever made.

You wouldn't think decade-old graphics could look this good, let alone that a decade-old fighting game could hold up this well. Darkstalkers Chronicle: The Chaos Tower is an amalgam of Capcom's other 2D fighting game series, the one that's clearly derivative of Street Fighter but features a much more imaginative and in many ways more likable cast of characters. It's essentially a pixel-perfect port of the arcade Darkstalkers games, and it adds Wi-Fi multiplayer support and some bonus extras into the mix, to good effect. Those who'll most appreciate this game will long for a six-button joystick configuration as they wrestle with the PSP's serviceable but somewhat substandard control scheme (substandard for six-button fighting games, anyway), though they'll relish having the Darkstalkers series and its great cast of characters available on the go. Put it like this: Darkstalkers Chronicle is probably the best portable fighting game ever made. After all, it's the first portable fighting game that meets and even exceeds the quality of its arcade ancestors.

Since the original Darkstalkers game was basically a wild offshoot of Street Fighter II, the game follows the same blueprint that most every fighting game since Street Fighter II has followed. You choose from one of a variety of different characters and take on opponents one at a time, attempting to beat them into submission using a variety of standing, crouching, and jumping attacks, as well as different special moves. Since the characters come in all shapes and sizes, expect to see plenty of completely crazy moves. The six-button layout means each character has a large variety of punches and kicks (or the equivalent), and, together with Darkstalkers' chain combo system and the characters' generally high degree of mobility, gameplay becomes a real test of tactics, wits, and reflexes. Alternatively, it can be pretty fun to mindlessly mash away on the buttons, watching whatever happens as a result. This is frankly the easiest option, as the PSP's button layout and D pad can make it difficult to pull off some of the fairly complex, multibutton commands necessary to execute some of the more sophisticated moves and combos. Still, with practice, you should be able to regain those rusty, old arcade skills.

Darkstalkers Chronicle is based on an old Dreamcast title, which in turn combined the original Darkstalkers game as well as its sequels--games that added new characters, updated the characters' storylines, and tweaked the rules of play. So it includes the entire series' cast of nearly 20 characters, ranging from original favorites--like the vampire Demitri, the succubus Morrigan, and the kung fu werewolf Jon Talbain--to relatively newer contenders--like Chinese ghost Hsien-Ko, the unassuming Baby Bonnie Hood (think Little Red Riding Hood gone postal), and the arrogant demon Jedah. This is a classic fighting game cast that hits all the bases of monster movie pop culture, while at the same time featuring a distinct, unmistakably anime-inspired sense of style. The characters are both beautifully animated and practically bursting with personality with their every move. Multiple win poses, unique and perfectly suited voices, memorable musical themes, and plenty of clever, surprising-looking attacks make the Darkstalkers cast a highlight within the fighting game genre, as well as within the ranks of developer Capcom's pantheon of video game characters. Seeing the Darkstalkers gang in all its full-colored, fully animated glory on the PSP's bright, beautiful screen is going to make this game worthwhile to any longtime fighting game fan.

Though the one-on-one fighting mechanics are at the heart of all the modes in Darkstalkers Chronicle, the game boasts an impressive amount of variety in terms of character selection and modes of play. Probably the most significant of these options is the choice between original arcade-style controls and an "easy" control scheme better suited to beginners or those otherwise unable to work around the PSP's inability to perfectly mimic an arcade cabinet setup. The normal controls require you to input moves using the same quarter-circle and multibutton patterns that work in the arcades. The easy controls simplify things down to taps on the D pad, along with simultaneous button presses. Since the gameplay moves quickly, even if you don't pick one of the "turbo" speed settings, the "easy" control scheme turns out to be a welcomed inclusion. So even if you're well acquainted with this style of gaming, you might just gravitate toward the simplified controls.

As for modes of play, you've got a standard arcade mode, as well as the "chaos tower" mode, which lets you choose three different characters to use to fight your way up through the tower by taking on one opponent at a time on his or her "floor." Some of these battles have special conditions (for example, you might be unable to punch in one fight), which give this mode some additional variety. Still, between how Darkstalkers Chronicle has some pretty noticeable loading times between fights and how you typically only fight opponents for one round in the chaos tower, this mode isn't completely satisfying. Despite the underlying quality of the gameplay, you don't want to be looking at a loading screen practically half the time you're spending with a game. The game's loading times are probably its most noticeable weakness. One other minor one is that there's no in-game move list for the different characters. Many of the special moves require nonstandard inputs, so it pays to have a move list (such as the one in the manual) handy while playing.

The game's also got a training mode (for practicing your moves) and, of course, a multiplayer "network" mode. Darkstalkers Chronicle's Wi-Fi multiplayer support works just fine, letting you take on any other Darkstalkers fans in the vicinity over the airwaves. This is really where your skills will be put to the ultimate test, since, by default, the artificial intelligence really doesn't put up much of a fight. Still, by cranking up the game's difficulty, it's possible to find a ruthless opponent even in the AI. Yet the Wi-Fi modes are definitely going to be the highlight for hardcore fans. You've got several different, similar options available here, including a standard two-player versus mode, a four-player round-robin "league" mode, and what's called the "limit" mode, which can restrict matches similarly to some of those you'll find on your way up the chaos tower.

Darkstalkers Chronicle features a bunch of fairly esoteric options, namely the ability to define the rules of the gameplay based on any of the Darkstalkers titles. Not only did some of the characters' moves change over the course of the series, but some of the mechanics of gameplay did, too. For example, the original Darkstalkers was based on Street Fighter-style best-of-three-round matches. However, later Darkstalkers games consisted of one continuous match, where characters that got knocked down once quickly got back on their feet with a second and final life bar. The game also, thankfully, lets you choose to play in the original 4:3 aspect ratio, which puts it in a vertical letterbox (by default, the graphics are stretched wider than normal due to the PSP's big screen). You can also unlock all kinds of great-looking character art, music and sound effects, and endings for all the different characters. There's quite a bit of content here.

It's already widely known that the Sony PSP is capable of pulling off some impressive-looking 3D graphics. What's less obvious is how well it can pull off a 2D game like Darkstalkers Chronicle, whose artwork somehow comes off looking more vibrant than ever in this portable form. Add in wireless multiplayer support and a lot of other convenient gameplay options--not to mention a good smattering of unlockable content--and you've got yourself a fighting game fan's dream come true in Darkstalkers Chronicle. 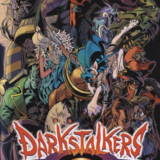