Prospective buyers will definitely want to rent this one first to see if they can stomach its inadequacies.

Dark Savior is a sequel to the popular Genesis RPG Landstalker, and plays almost identically, with the exception of the obvious 32-bit enhancements. Make no mistake: This is an action-based role-playing game that's similar to those before. But Dark Savior contains a heavy platform element, and therefore a good portion of the game is spent running across bridges, jumping over rivers, and pushing blocks out of the way. But the rest of the game contains far more depth (and makes up for the occasionally monotonous wandering).

An improved feature over its predecessors is Dark Savior's camera control, which will greatly help you guide the hero through some of the tougher jumping sequences. This feature makes good use of the analog controller, but it switches back to the original camera angle after each use, meaning permanently changing your view is impossible. The diagonal perspective of the game is nice, but it sometimes leads to trouble when it isn't possible to see around certain obstacles. Despite the ability to change camera views, controlling Garian, the hero, can be a chore because he must come to a near-halt before he's able to change direction. Pushing him in another direction while walking at full speed does absolutely nothing - he just keeps on truckin'. This makes accurate direction changes a total nightmare.

And while multiple views aid otherwise quirky navigation, the feature that truly sets this game apart from other RPGs is its fighting mode. When a battle takes place, the view switches to a zoomed-in area. And the fighting itself then mimics a traditional fighting game, complete with special moves, finishing moves, and a capture move (which allows players to control the captured character and use him in later battles). While this is a neat feature, the fighting mode unfortunately suffers from a dearth of variety. The result: Players simply end up sticking and moving until the monster in question meets an untimely demise. It's also worth noting that the graphics in Dark Savior are good (though they get a little blocky in the fighting mode), and though the sound is tolerable, the music is outstanding.

All in all, Dark Savior is a good role-playing game, though the control problems make this game difficult to wholeheartedly recommend. The fighting game aspect is an interesting feature, but it isn't done nearly as well as it could or should have been. Prospective buyers will definitely want to rent this one first to see if they can stomach its inadequacies. 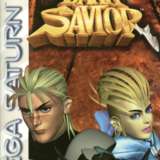