Balls to the wall.

Demanding equal parts finesse and intuition, golf is a sport few will ever master. A poor swing here, a bad lie there, and even the most passionate golfer can see their enjoyable pastime turned into an exercise in anger management. Dangerous Golf, on the other hand, eschews precision in favor of chaos. Like a drunken afternoon at the driving range, hitting a golf ball in Dangerous Golf is about expressing power, and nothing like actual golf. Your priority is to smash into as many objects as possible in everyday environments like bathrooms, kitchens, and fancy estates. It's a diabolical fantasy brought to life, but it's not half as fun as it sounds.

Across four countries and numerous locales, you will hurtle golf balls into objects including fine dining ware, pianos, priceless works of art, and--why not--urinals. Don't worry about choosing an appropriate club or timing your swing just right. Simply aim the camera, press a button, and let the catharsis of destruction sink in. When you break enough items in a level, you can execute a follow-up Smashbreaker shot, which allows you to manually steer a bouncy, flaming wrecking ball, plowing through props and racking-up score multipliers until your timer runs out.

Wrapping your head around the physics of a bouncing golf ball is easier said than done, especially when the game's camera is obscured by flying pieces of broken objects. Once your Smashbreaker shot is powered up, you have to use both the left stick and the camera to control the ball, as well as two shoulder buttons to dictate how high or low the ball bounces. Most of the time, you can sort of steer the ball the way you want to, but it usually feels like you're trying to steer a ship with broken equipment, praying it reacts the way you want it to and struggling to correct it when it doesn't.

You eventually have to putt the ball into a hole, but if there's an unobstructed path (one devoid of unbreakable objects), you can just push forward on the analog stick and the ball will zip right in, smashing through smaller debris along the way. But if higher scores and rankings are what you seek, you may decide to bounce your ball off of walls or hit it into the air and attempt to drop it in the hole for an added bonus--sometimes you're left with no other option.

There are rare levels filled with dozens of holes, where putting is your only objective. With a limited amount of balls in hand, you need make sure your shots are true--or at least pray they are lucky--in order to avoid running out while frantically taking aim at targets near and far. Pure putting levels lack the destruction found in standard outings, but they stand out as the best Dangerous Golf has to offer. In these moments, your goal is clear, and more importantly, your controls are intuitive.

The oddball nature of Dangerous Golf is momentarily enjoyable, but apathy quickly sets in as you proceed to smash familiar objects level after level, resulting in all too familiar chaos. The game attempts to liven up your experience by introducing gimmicks like bombs, and showering you with loud graphics and sound effects. But all of this does very little to make the experience appealing in the long run. It's like a comedian who shouts mediocre jokes--being loud doesn't make the material any better.

With 100 levels and far fewer unique locations, Dangerous Golf is best enjoyed in small bursts lest you grow bored of the repeated use of familiar maps. However, any amount of time in the game can prove frustrating due to the burden of long load times, especially when you get to the more complex missions. In later levels, you're still smashing objects like you always have, but you ultimately have to learn to avoid hazards and direct your ball on a particular path in order to hit specific objects to earn enough points for a medal. When precision fails, you will naturally restart the level.

This process becomes unbearable--it seems the game is completely reloading the level--and you have to stare at the same loading screen every single time. To make matters worse, the loading screen is just an image of the controller with button descriptions. Buried in the corner are little hints--the only attempt the game makes to explain its nuanced scoring and control systems.

Dangerous Golf is a game you want to love, but it becomes increasingly difficult as you go: the unintuitive controls stop being cute and begin to become an annoyance; the objects you smash, which for a moment inspired joy, become an afterthought. Wacky games have a place in gaming, but a game like Dangerous Golf needs more than boisterous effects and odd scenarios to sustain its allure.

View Comments (31)
Back To Top
4
Poor
About GameSpot Reviews 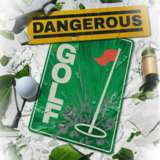 Peter unlocked every location in Dangerous Golf before writing his review. GameSpot was provided with a complimentary copy of the game by Three Fields Entertainment.