Complex dance moves might deter some, but a good set of songs and fun multiplayer modes make Dance Paradise well worth an audition.

UK REVIEW--There are already a number of takes on motion-controlled dance games, with the likes of Dance Central, DanceMasters, and Just Dance each putting their own unique stamp on the genre. Dance Paradise offers up yet another new way of presenting routines that is more complex, but still works well. A large tracklist includes a variety of pop, dance, and rock songs, while a full career mode and a two-player versus mode make it fun on your own or with friends. Though the dance routines are sometimes a little too advanced for those with two left feet, and the lack of advanced instruction can be confusing, the well implemented scoring system means you'll be able to have a good time regardless of your ability.

The gameplay of Dance Paradise is more complicated than the likes of Dance Central and Just Dance, though a short tutorial teaches you the basics effectively. There are four colored lanes that stretch from the top to the bottom of the screen, on which animated dancers appear and move down the track. When a dancer reaches the bottom, you have to mimic his or her movements. This setup gives you time to see upcoming moves and start dancing before the game scores you on them, which makes mirroring the actions much easier. However, because the dancers are styled as flat blocks of color, it can sometimes be difficult to tell exactly what move they're performing, particularly when that move involves complex hand actions. Moves alternate between each of the lanes, which you must skip between with a quick sidestep. A vitality bar on the bottom left of the screen keeps track of your performance, with missed moves depleting the bar and good, great, or perfect moves filling it. If the bar is filled completely, you can jump to activate dance power, which gives you a score bonus. However, if the vitality bar is depleted completely, the game ends.

As long as you've got some good dance skills, you'll rarely see the "game over" screen, thanks to the well-implemented motion controls that accurately track your movements. You'll need to bring your A-game though. Some of the routines are very complex, requiring nimble limbs and good coordination. Though the tutorial runs you through the basics, it doesn't teach you any of the moves or offer a slower practice mode, so you initially spend much of your time stumbling through songs. Novices can still have a good time, but if you want to rack up some high scores, then you need to spend some time learning the harder moves. On the flip side, if you're finding it too easy, you can switch the difficulty over to hard, which increases the frequency of moves in a track, though the routines remain the same.

In addition to the standard Free Play mode, where you can create a playlist of songs to groove to, Dance Paradise has a career mode. There are six levels to play through, each of which contains a number of challenges to complete before you can progress. These range from having to get seven perfects in a song to completing a song with at least 60 percent of your vitality bar remaining. The challenges are not only good fun, but completing some of them also unlocks new outfits and accessories for your avatar, as well as golden steps, 27 of which you need to unlock the final level, the VIP Club. Though some challenges are tricky, none are so hard that you'll find it impossible to reach the final level, and because there's a mix of them spread over different songs, they never outstay their welcome.

There are also three multiplayer modes that allow two players to battle head-to-head: Versus, Attack, and Synchro. Versus is the simplest of the three; each player must man two of the move tracks and attempt to get a better score than his or her opponent. Whoever has the most points at the end of the song wins. Attack introduces power-ups to the match, letting you hinder your opponent's dancing. By jumping with a full vitality bar, you unleash a random attack. These include track jump, which makes your opponent's dance instructions randomly skip across tracks and disappear, which gets rid of them altogether. This is easily the most fun of all the multiplayer modes, with matches getting heated as you launch streams of power-ups at each other. Sadly, the final mode, Synchro, isn't as exciting. You and your partner must perform the same moves, with the lowest of your scores counting toward the total. This mode can be particularly frustrating if you're dancing with someone less skilled, though less-competitive players may find it enjoyable.

Backing up the routines is a good tracklist, made up of 40 songs from the Universal Music label. These range from pop songs such as "Bad Romance" by Lady Gaga and "We Are Golden" by Mika to "Celebration" by funk legends Kool and the Gang and "Dance Dance" by rockers Fallout Boy. Most genres are catered to, though you may find the tracklist errs too much on the side of pop. The visuals are also good and incorporate your avatar into the gameplay. While you attempt the moves, your avatar dances along at the side of the screen and not only looks cute but also gives you an opportunity to check out any outfits and accessories you may have unlocked. The cartoonlike style of the environments fit perfectly with the feel of the game, ranging from bright sunny beaches to light-filled nightclubs. One other nice touch is the music videos that play behind the action, giving any onlookers something to watch while you're playing.

Though the complex dances may sometimes be confusing--particularly for newcomers--Dance Paradise is still fun. The large tracklist, great use of avatars, and competitive multiplayer modes mean you'll have a good time playing with friends. And the challenging career mode, complete with unlockables, means you won't get bored on your own either. The unique lane system for presenting routines also works well, making it easy to line up moves and bust a groove. It might not offer the same levels of sophistication and graphical prowess as Dance Central, but if you fancy a different take on the genre, then it is well worth it to put on your dancing shoes for Dance Paradise. 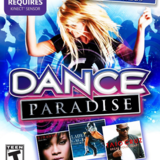 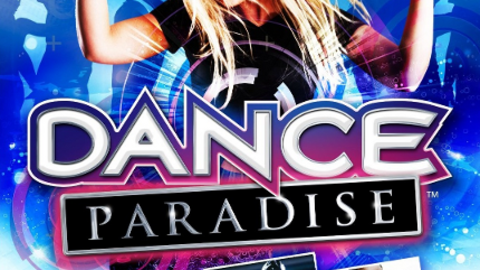 Teen
Lyrics, Suggestive Themes, Use of Alcohol and Tobacco