With a short story mode that serves as a fun, linear introduction to sequential stomping, Mario Mix is suitable for a child, or for an uncoordinated friend.

By now, dancing game enthusiasts are content to receive modular updates of their preferred franchise, be it Dance Dance Revolution, Pump It Up, or Stepmania. DDR: Mario Mix offers a new entry point for those who haven't played dancing games up until now. Its typically gorgeous representation of the Mushroom Kingdom and its often hilarious storyline make this game a real Mario adventure. The inclusion of a story mode is a no-brainer that makes learning to step a whole lot more rewarding for newcomers. However, the game's very low difficulty--even on "super hard" mode--makes Mario Mix a poor choice for anyone who's extensively played other dancing games. Of course, as this is the first official DDR game to grace the GameCube, this lower difficulty isn't a complete surprise or detriment.

DDR: Mario Mix centers on its story mode, which spans five short worlds. At the game's outset, the Mushroom Kingdom is being menaced by a mysterious figure (obviously Waluigi) who has stolen the magical Music Keys, which maintain rhythm in all the land. As a result, everyone is forced to dance mindlessly, or so Toad claims. The faithful fungus summons Mario to save the day through dancing, as his legs are slightly less stubby than those of Toad or Wario, who also makes an appearance. The predictable premise is a joke for traditional Mario game fans who've gone on their fair share of collectible quests over the years. Mario Mix even pokes fun at Nintendo's tendency to rebrand existing games with Mario characters, sometimes several times. It comes to light that Wario plans to use the Music Keys to create DDR: Wario Mix.

Throughout the adventure, the story hits all the right notes and includes the typical Mario environments. Elemental obstacles often manifest themselves within the dance action, which is Mario Mix's most innovative feature. If you're in an icy area, ice spikes will appear on your dance board. Step on these, and your dancing momentum meter takes a hit. If you're in an area with koopa troopas, such as Bowser's Castle (yes, of course he makes an appearance), you'll have to stomp on them twice--once to force them inside their shells, and a second time to launch them into an oncoming note, destroying it. Coin buttons are nice to find, as these turn all the arrows scrolling toward your screen into coins, which can be used to purchase extra lives and in-game power-ups.

Boss fights usually involve items stomped back and forth between your dancing opponent. These sometimes move in a long arc through the split-screen barrier, or just fire directly at you. While battling Bowser, you'll have to build rockets by stomping groups of three components, which is one of the more inventive concepts. This is a neat addition, because it makes it feel like you're really competing with your rival, rather than simply dancing next to him and performing identical steps.

Once you complete story mode on the normal difficulty, you'll unlock the hard mode. Play through it twice more, and you'll unlock very hard mode and superhard mode, the latter of which is about equivalent to a regular DDR game's standard mode. Those accustomed to playing on heavy difficulty in DDR won't find any challenge here. The characters you encounter on your two-hour journey are entertaining the first and even the second time you meet them, but not after that. The unlockable difficulty levels are a cheap way to add more play time to the main game, which, clocking in at around two hours, is much too short.

The minigames you encounter in story mode are worth mentioning, although none are as fun as the songs. Mario will do things like punch boxes, whack koopas, or collect bananas in exchange for coins. After you complete each minigame, it becomes available for individual play whenever the urge strikes you.

You can play all the songs you unlock on your adventure in free mode, where you can choose a tune to enjoy alone or with a buddy. The additional items to be stomped (like goombas and koopas) can be toggled by enabling or disabling mush mode. On most songs, mush mode adds some welcome difficulty, although its obstacle placement can sometimes feel a bit cheap. Occasionally, a deadly ice spike will appear right before a note, damning all but the most eagle-eyed of players.

Although DDR aficionados won't be pleased by Mario Mix's low difficulty, they--just like everyone else--will be impressed with the game's visuals. From the friendly portcullises of Truffle Tower to the foreboding spires of Bowser's Castle, Mario Mix looks almost as good as Mario: Sunshine. Other dance games, including the DDR games themselves, employ low-poly dancing avatars. In contrast, Mario Mix has some really entertaining stuff going on behind your arrows.

The music selection doesn't just consist of Mario Tunes--although those that are, are well represented, culled from Mario titles of past and present. Songs from Twinkle, Twinkle to Mozart concertos have been remixed by (presumably) fictional artists. A slippery ice level's song was purportedly written and stepped by "Les Patineurs" (French for "the skaters"). The quality of these remixes is variable, and one could say they'll appeal more consistently to the bib and cradle population. It's also worth noting that there are fewer tracks here than in many dancing games.

The bundled dance mat, which features a silhouette of a break-dancing Mario at its center, is more responsive and texturally pleasing than Mad Catz's MC Dance Groovz mat--previously the only available dance pad for the Cube. The entire mat is striated with vertical grooves, which feel really nice against bare feet. A sticky texture on the bottom of the mat ensures that it won't slip around as much as competing nylon pads. Plus, this is a cool collector's item for Mario fans.

DDR: Mario Mix is an introduction to dancing games, and it isn't suitable for fleet-footed veterans. This is too bad, because rhythm action fans would really appreciate the long-overdue gameplay revisions Mario Mix brings to bear. However, with a short story mode that serves as a fun, linear introduction to sequential stomping, Mario Mix is suitable for a child, or for an uncoordinated friend. 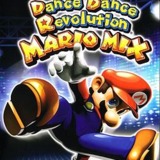