Drift racing is supposed to be fast-paced and exciting and it's neither of those things in D1 Grand Prix, a lifeless and frustrating PS2 racing game.

D1 Grand Prix is notable for several reasons. First, it's the racing debut for Yuke's, a development studio primarily known for its Japanese and American wrestling games. Second, it's a racing game that's less about traditional speed than driving with style. Unfortunately, D1 is also notable for a learning curve that will be prohibitive to all but the most devoted virtual drifter, and even then, there are enough presentation problems to rule this game out for casual and dedicated racing fans alike.

Drifting--the technique of expertly sliding your car around turns at extreme angles and speeds--isn't anything new. It's been around in video games for a while, and movies such as The Fast and the Furious: Tokyo Drift have put a big spotlight on the admittedly cool techniques of surfing your car around the asphalt. What sets D1 apart is its single-minded devotion to drifting, not just as a neat way to maneuver a car around a race course, but also as a means of competition. In D1 races, it doesn't matter who crosses the finish line first; the quality and quantity of your drifting is what will earn you wins. From a gameplay standpoint, success in D1 will require a shift in your racing mindset. Even when you are fully tuned to the finer points of e-brakes, clutch kicks, and feint drifts, you're going to find a game that is too specialized and bland to offer much fun.

Carrying a full D1 Professional Drift Grand Prix Series license, the game features a number of real-life D1 pros and their distinct rides. Before you start competing against the pros in D1's series mode, you need to complete the game's training missions, which range from simply learning the basics of drifting to more complicated sequences of turns that will test both the limits of the cars and your patience. It's understandable that a tutorial on advanced drifting techniques is difficult, but by restricting access to the main mode in the game until you've completed some rather harrowing driving tasks is cruel and unusual punishment. Ironically, while the tutorial does do a good job of giving you the basics of drift maneuvers, you'll still feel caught out on many of the courses in the season mode, which feature a variety of dramatically different turn types. A quick-access practice mode, which would let you practice and repeat any turn or sequence of turns on any course in the game, would have been a more useful addition than the tutorial.

When it comes to the D1 series mode races, the events are split along two different race types. The first section gives you three chances to attack a particular course solo and acts as a qualifier for the actual D1 races. Should you qualify for the races, you'll compete in at least two head-to-head races--in one leg you'll be leading the race, and in the other, you'll be chasing your opponent. And while the idea is to drive as quickly as possible, these D1 head-to-head races aren't a dash to the checkered flag. Instead, you'll be judged on your drifting style along a number of different criteria: drift length, angle, and speed, as well as how closely you stick to your competitor (if you're following) or how much distance you can open up with the car behind you (if you are in the lead).

As you drift through turns during events, you'll earn drift points based on the above criteria. A trio of annoying commentators will also give their thoughts on your drifting style. Should you run into a car ahead of you, spin out, or leave the track, you'll lose a huge amount of points and kiss your chance of winning that event good-bye. While the scoring system makes sense in theory (in the same way that judging figure skating makes sense) its execution in D1 seems haphazard and sloppy. Sometimes your drifting maneuvers earn you no points; other times you might have your points taken away from you for reasons that aren't entirely clear. The remarks from the commentary team don't offer much in the way of help, either--one second they're impressed with your drift, and in the next, they're chastising you for screwing up, sometimes in the span of a single turn. In all, there doesn't seem to be much in the way of consistency, and it makes for a frustrating experience.

To its credit, the physics in D1 Grand Prix aren't half bad. The cars feel bouncy and agile, as if they're primed to slide even when running down a long straight, and it's pretty easy to get a cool tire-smoking drift going and maintain it around turns. The game's controls let you use either the X button or the right analog stick to control the gas, and these buttons seem more sensitive to different amounts of pressure (and thus different amounts of throttle) than other PlayStation 2 racing games we've played. In addition, you'll race in both wet and dry conditions, and as you might expect, the level of drift you experience on a wet track is very different to that on dry asphalt.

The game's car roster includes a host of real D1 rides, as well as a number of more generic cars from makers such as Nissan, Subaru, and Toyota (Initial D fans might get a kick out of driving the famous AE-86 from that series). The cars have different performance levels, making some better than others for taking on the stiff competition you'll face in the game. Cars are organized into three categories in the game--beginner, expert, and professional--and these distinctions deal mainly with performance and how many tuning options you have for the car you choose. While those car distinctions make sense, this game is practically begging for a gentler learning curve when it comes to the competition you'll face in the game. As it stands, you're more or less tossed to the drift-racing wolves in D1's season mode, and you can expect to lose many races (and perhaps a few controllers tossed in anger) before you make any headway at all in this game. It doesn't help that the lower-powered cars in the game are useless, especially considering you'll often be going up against a much higher-powered car in head-to-head events. Your only recourse is to use the car with the most horsepower available to you and hope to match your opponents' ability to accelerate through turns.

D1 includes a number of real-life racing tracks that have hosted pro drifting events over the years. Most of the tracks are located in Japan--you might recognize courses such as Fuji, Sugo, and Tsukuba from other racing games. In many of the events, however, you are only racing portions of the track--usually the most technical sections, so the races themselves are typically very short. As a result, you'll too often find yourself switching between menus and loading screens, waiting to get to the next event.

The cars themselves are the strongest aspect of D1's graphics. The generic car models are instantly recognizable, and the D1 cars--with their sporty lines and outlandish paint jobs--look good, too. The race tracks look fine, if not particularly intricate, as well. That's the good news. The bad news is that even though the game's frame rate is consistent, the cars feel sluggish, no matter which camera view you use. The damage model, too, is weak--even the slightest bump will rip off the bumper of either your car or the one in front of you.

D1 Grand Prix probably isn't aimed at fans of standard racing games. At least, it shouldn't be. Perhaps there is a segment of virtual gearheads that will appreciate this different take on racing games and find an enjoyable challenge in its tunnel-vision focus on drifting and its prohibitive difficulty. For the rest, they'll end up playing a game whose pleasures are all too short and its shortcomings maddening. The appeal of the professional drift-racing scene is unquestionable, and it probably does warrant a compelling video game to complement it. D1 Grand Prix just isn't that game. 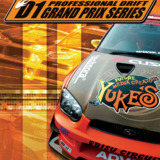 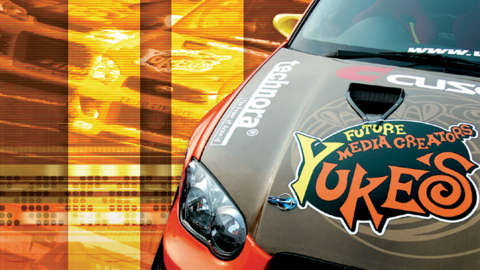 Yuke's brings its own brand of Formula One racing to the PS2.