In the future there will be battling robots. Not like the ones assembled from scrapped power tools by weekend engineers, either. Robots will be tiny, fully customizable, collectible machines that fight in holographic arenas. There will be robots for everyone, from schoolchildren to police officers, and robot battles will be a constant fixture in everyday life. At least, that's what the future is like in Nintendo's latest DS game, Custom Robo Arena. This future looks bright, because Custom Robo Arena is an addictive game that will keep you entertained for hours.

Custom robos are fully customizable robots that are less than a foot tall but still pack plenty of firepower. The robos are designed to engage in one-on-one battles in small holographic arenas called holosseums. The robos are controlled by their human owners, who use mental energy to pilot the small robots from outside the holosseum. It seems that just about everyone in the world has a custom robo, and they frequently engage in battles for the sake of settling arguments, keeping the peace, or just friendly competition. You play the game as a young boy who recently moved to a new town. In the beginning of the game you receive a custom robo for your birthday and join a custom robo battling team at the local school. From there the rest of the single-player story mode is a very long series of battles that will take you through several tournaments until you eventually prove that you're the best robo commander around.

There isn't much to the game other than the constant battles, but the battles are enjoyable enough to excuse the shallow story. You can customize your robot with a wide variety of parts that you can purchase or receive as gifts. There are several different robo models, each with unique strengths, weaknesses, and abilities. Once you've chosen which robo you want to use, you can equip it with a gun, a bomb, legs, and a pod, which is a type of dropped weapon similar to a mine. You can save up to four different configurations so you can quickly choose the right setup for any given battle. There are more than 150 different parts in the game, so you're given plenty of options when it comes to outfitting your robo.

In most battles you simply fight it out until one robo is KO'd after losing all its hit points. There are a variety of different holosseums to fight in, but most of them are small square maps filled with low walls and other barriers. You run and jump around in these arenas, trading fire with your opponent until one person loses. All of your weapons have infinite ammo but can fire only in short bursts before needing to be reloaded. The trick is to use all three of your weapons in conjunction to maximize the damage dealt to your opponent. For example, you can shoot your enemy until he falls down, then fire a bomb to hit him again while he's on the ground, and then scatter a couple of pods around the map to hit him when he gets back up. You can also use melee attacks, but with all the firepower at your disposal, that's rarely necessary. At the end of each battle you're given a letter grade based on your remaining hit points and the time it took you to finish the battle. Based on this score, you earn money and stars, which raise your rank. The rank doesn't serve much of a purpose in the game other than to act as a superficial progress indicator.

With the infinite ammo, constant explosions, and frantic robos jumping and dashing about, the battles are usually extremely fast and chaotic. The excitement and quick pace make the battles fun, but there's very little challenge to the fighting. In the beginning of the game you might lose a match or two, but once you get the hang of the controls and find a workable setup for your robot, you'll be able to breeze through just about any battle you fight. If you do have trouble with a match, you can retry it as many times as necessary, and after a while the game will even offer you a handicap by lowering your opponent's health by up to 75 percent. What makes the game easy is that some of the weapons are overpowered, which also defeats the purpose of collecting parts and customizing your robo. There's little reason to save up your cash and go shopping when you can blast your way through any opponent with the basic equipment that you get at the beginning of the game.

For more of a challenge you can pit your robo against others in a fully featured multiplayer game. Custom Robo Arena supports game sharing, local multicard play, and online play to let two players duke it out and trade collectible dioramas, which are small scenes in which you can pose your robots. When playing online you can connect to people you know using friend codes, or you can try your luck against a random stranger. The game lets you connect to any available player or limit your opponents to those who are close to your level. If you play against a random person, you can choose to add him or her to your rivals list to make it easy to connect for more battles later on. You also have a friends list that you can fill out by entering friend codes. The online battles are fast and lag-free, and it's nice that you don't have to dig through menu after menu to get connected to an opponent. Custom Robo Arena also has a voice chat feature that lets you talk to people you're playing against before and after battle, but only if those people are on your friends list. Online matches are limited to best-of-three battles, and the time is set at three minutes per round, but when playing local multicard games you can set rules for the number of matches, the time limit, what types of parts can be used, and more. The game-sharing feature lets you engage in a multiplayer battle with only one copy of the game. However, game sharing loses much of its appeal because it limits you to just a handful of weapons and parts to customize your robo. Even with the limited options, the battles in single-card play can be a lot of fun.

The graphics in Custom Robo Arena are bright and colorful, with small 2D sprites running around a flat but cheerful town full of cheerful people cheerfully battling one another with custom robos. The saccharine look of Custom Robo Arena is charming, though, and it works just fine because the game doesn't take itself too seriously. The story characters all have large 2D portraits that look good, which helps make up for the lack of detail in the sprites and backgrounds in the town view. The battles all take place in full 3D, and although the maps aren't especially detailed, they're well designed, and it's always easy to see where you are and what you're doing. The 3D models of the robos look a bit blocky and plain, and in battle the camera is usually pulled out so far that any detail is lost. The robos still have that certain Japanese robot charm, though, and it's somewhat entertaining to pose them in the various dioramas you've collected. The music in the game is all high-energy, synthesized rock music that fits the futuristic battling robot theme perfectly.

The fast-paced action, accessible robo customization, and great multiplayer features make Custom Robo Arena a well rounded package that just about anyone can enjoy. It's a bit unbalanced and too easy in the single-player mode, but that doesn't take away from the fact that Custom Robo Arena is just plain fun to play. 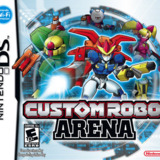