In Cubic Ninja, you guide a quadrate warrior through a series of increasingly hostile levels by tilting the 3DS. Gliding down twisted corridors is as effortless as it is novel, and there's an undeniable joy in winding your way through a particularly nasty stretch unscathed. But that thrill quickly dissipates once the difficulty ramps up; later levels demand a degree of precision that is maddeningly high considering the limited controls, and the game's strong reliance on unseen traps turns your free-floating fun into an arduous series of trial-and-error failures. Cubic Ninja's inconsistent level design hampers much of the appeal of this motion-control adventure.

A cubic ninja doesn't have much reason to exist without a princess to rescue. The story setup is one you've heard a thousand times before, but it's worth paying attention to thanks to its air of irreverence. Tongue-in-cheek jokes are sprinkled throughout the scrolling words that introduce each new section, and they provide enough charm to put a smile on your face. In the early going, you'll smile at the joyful action sequences as well. Cubic Ninja strips away any direct control of the protagonist and replaces it with a system that requires you to tilt the entire 3DS to get him to move. As you turn the handheld console on its side, upside down, backwards, forwards, and every which way, you may look like a monkey trying to wrap your head around this fancy technology, but that doesn't detract from the fun one bit. Scooting through narrow paths at top speeds delivers a freeing feeling that's akin to whooshing through a zero-g space station, and empowering introductory levels make you believe there is a wealth of possibilities on the horizon.

Unfortunately, the only thing on the horizon is your unavoidable death. Stages are constructed in a "gotcha!" manner that makes dying a frequent occurrence and quickly squashes the exuberant fun from the early going. Flaming pillars wait for you at the bottom of long tunnels, enemies hide behind walls, and the slight delay when you tilt the system makes it incredibly difficult to avoid these traps unless you know of their existence ahead of time. In some levels, you can mitigate this problem by moving at a snail's pace, provided your hands are steady enough to pull off such a feat, but this option is not always present. Buttons open paths to locked sections, and you need to rush through with reckless abandon to make it before your path is barred. Or maybe a collection of spiked balls and flaming pillars line the path, forcing you to sprint through when an opportunity presents itself. And if you do, there's often an unseen enemy or spike pit waiting to kill you. It's a frustrating system that punishes both patience and daring.

Boss fights appear five times throughout the 100-stage adventure, and they provide the most egregious source of woe. Fast reflexes are highlighted here, but Cubic Ninja doesn't move with the catlike quickness needed to come out alive. Because of this, you have to guess your opponent's move in advance and hope you're right. The difficulty can be frustrating, but you do earn access to life-saving abilities if you fail five consecutive times in one level. Cubic Ninja can shrink down to avoid traps, trigger all the buttons to unlock every door at once, or don a protective shield so you can withstand more than one hit. These tools make it possible to pass even the most aggravating bosses and stages, though they often make things so easy that any thrill of success is stripped away. You also have the option to use the circle pad to rotate the world around Cubic Ninja instead of tilting the system, and though this feels clunky compared to the standard method, it can remove some of the problems. Neither option is ideal, but it's nice to be able to switch between two choices, depending on what dangers you face.

Cubic Ninja certainly has problems, but a lack of replay value isn't one of them. As you progress through the adventure, you gain access to characters with different attributes. These range from a ninja that is made of rubber who bounces through levels to a titanium ninja invulnerable to certain traps. Replaying levels with different abilities lets you view things in a new light, so if you do get sucked into this twisted adventure, there's plenty of reason to go through the whole shebang multiple times. A creation tool set also lets you craft your own levels. If you loved the early stages that rewarded high speed and minimized dangers, you can craft as many as you desire, bringing out the best of this quirky game. It takes a bit of practice to understand how to lay out a level so that it works the way your mind imagined it, but it's worth the effort. And you can share your creation (or import others' levels) by scanning QR codes. There's a lot of fun to be found in Cubic Ninja, and the robust creation tool lets you design stages that emphasize exactly how you want to play.

The extra dimension offered by the 3DS is not often utilized in Cubic Ninja. When using the standard tilting controls, the action is purely 2D. It wouldn't be possible to view the 3D effect when you're constantly turning and tilting the screen, so this decision certainly does make sense. If you crave 3D, you can flip this graphical option on when using the circle pad. This makes it a bit easier to judge depth as you move in and out of the background, but it doesn't have a big impact. No matter which visual style you go with, Cubic Ninja is ultimately a flat experience that fails to take advantage of its potential. The punishing level design clashes with the carefree controls, which results in an uneven mesh that is more often frustrating than it is exciting. Cubic Ninja certainly contains elements that are fun, but you may have to design levels yourself if you're going to coax them out. 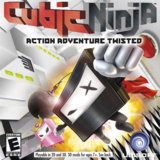 Cubic Ninja on the Nintendo 3DS will allow players to play without ever touching a button.