This Final Fantasy-themed tower defense game is bland and uninspired.

There are certain expectations Final Fantasy games carry with them. The expansive franchise is known for its interesting characters, epic stories, riveting musical scores, and cutting-edge visuals. Crystal Defenders transports the classes, monsters, and world from Final Fantasy Tactics into a tower defense game, but unfortunately nothing else has made the transition intact. The charmless visuals and repetitive soundtrack quickly smother the hope that this will delight the senses, and the complete lack of story or any personality makes it even more difficult to become engrossed in these skirmishes. But it is the unimaginative realizations of defensive tactics that make this experience feel so flat and lifeless. The strategy is adequate for those desperate to indulge, but there are more engaging, clever, and fun tower defense games to play.

Monsters are after your precious crystals! While there isn't any story to speak of in Crystal Defenders, the name alone gives you a taste of what to expect. Sentient balls of fire, frowning zombies, and gelatinous slimes will march in single file from one end of the map to the other in a desperate attempt to smash, or possibly steal, your precious stones. It's unclear what their motivations are, or why they would risk their lives for shiny minerals, but there is no time to worry about such concerns during battle. Your job is to stop them.

There are only 12 maps in Crystal Defenders, each available from the outset, so your success in battle will not result in a tangible reward. Each map has 30 waves of different bad guys parading by, and you deploy your troops both between and during rounds. There are only a handful of different character types, but you'll have to place them intelligently if you're going to vanquish all these potential thieves. The standard fantasy archetypes are on display, including a strong but slow soldier, a weak but fast white monk, and an eagle-eyed archer who can nail enemies floating tauntingly above the earth. With only a limited pool of funds, you'll have to choose wisely which characters to unleash on the unsuspecting enemy and where to place them. Although there is some satisfaction in successfully clearing a map, the gameplay is far too basic to be engaging for long.

Later levels add more-specialized character types--such as an extremely slow but powerful dragoon--and magic gems that beef up your stats, but these don't make the gameplay any more exciting. There is a severe feeling of disconnect between you and what is happening on the battlefield. You can place troops where you please, but once a fight begins, you have no say in how the tide turns. Recent tower defense games, such as Pixeljunk Monsters and Lock's Quest, have given you a character to control, which personalizes the experience more than the disembodied cursor you move around in Crystal Defenders does. It's one thing to deploy troops from your untouchable ivory tower, but it's far more engaging to take part in the war yourself, not only choosing the best tactical strategy for your troops, but fighting on the battlefield with them as well. In comparison, Crystal Defenders lacks a sense of urgency.

Intelligence on both sides of the war is nonexistent. Monsters walk along a preset path, never varying their speed nor attacking your forces. Although this is common for the genre, the friendly AI is just as stupid which can be infuriating at times. They have a radius wherein anyone who enters their range will be mercilessly attacked. Unfortunately, they don't exhibit any battle acumen, so they have no idea which enemy within their circle of death should be dealt with first. For example, if it takes two swipes from a soldier to finish off an antlion, they will often attack only once before they move on to the next in line. Given that an enemy needs only a sliver of life remaining to steal your precious crystals, it can be maddening to watch your last line of defense happily let every monster saunter past when another blow would have finished half of them for good.

The archaic visuals don't help matters. The character models look like they were pulled straight from a Super Nintendo game. These sprites have only a few frames of animation each and lack any sort of definable details. The monsters don't react to anything that happens in battle, cycling through the same walking animations even when they get an arrow in their skull or see their identical-twin friend die right in front of them. Allies are just as unresponsive to outside stimulus, reacting the same no matter how the battle is going. The graphics are every bit as bland as the gameplay, completely devoid of personality. The maps are colorful but dull. It's easy enough to tell which path is for enemies and which is for your own troops, but, like the rest of the game, they meet the lowest requirement and give nothing more.

Crystal Defenders is a stripped-down tower defense game that doesn't make good use of its Final Fantasy source material. Although it is a structurally sound attempt in the genre, it is so lifeless and uninspired that it fails to entertain for long. 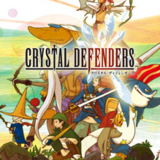 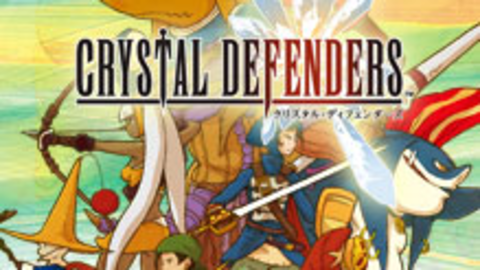 Crystal Defenders is a strategy game in which players deploy jobs from FINAL FANTASY Tactics A2 to fend off encroaching enemy hordes.