Warhead is a fantastic stand-alone expansion to a superb shooter, and should be played by anyone who likes games with guns.

All of the claims you may have heard that Crysis could only run on nuclear-powered supermachines were greatly exaggerated. But if for some reason you worry that this stand-alone companion to the ultragorgeous first-person shooter will bring your PC to its knees, you should know that it's highly scalable and ran smoothly on a number of machines during our testing. It also looks better, with clear attention given to the game's artistic sensibilities and the lusher, denser environments. But rest assured, developer Crytek has enhanced more than just the graphics engine. Vehicles are more fun to drive, firefights are more intense and focused, and aliens do more than just float around you. More emphasis on the open-ended environments would have been welcome, but a more exciting (though shorter) campaign, a new multiplayer mode, and a whole bunch of new maps make Crysis Warhead an excellent expansion to one of last year's best shooters.

If you didn't play Crysis, Warhead's story may be initially confusing, given that you hit the ground running with little exposition. You play as Sergeant "Psycho" Sykes, the brash Brit who was a bit player in the original game. Psycho tends to play by his own rules, always willing to ignore orders and jump into the fray if that's what the situation requires. The story runs parallel to the events of Crysis, though his strident attitude--and a dramatic cutscene near the end of the game--definitely make this Psycho's tale, even if the actual plot remains the same. In any case, you and your US Special Forces team are investigating a tropical island besieged by North Korean invaders. However, your greatest menace comes in the form of aggressive aliens that turn the luxuriant jungles and glowing beaches into a frozen wasteland. You and your teammates, clad in nanosuits that grant you special abilities such as super strength, temporary cloaking, super speed, and additional armor, confront both threats across a variety of large environments.

Psycho's brazen confidence does more than just establish a gutsy protagonist: It sets the stage for a more focused and intense series of battles that keep the pace moving more smoothly than before. Warhead still offers some of the same kind of sandbox levels, but thoughtful enemy placement and map bottlenecks keep downtime to a minimum. You can approach assaults on beachfronts and Korean encampments in a number of ways, so if you're a stealth enthusiast, you can employ your suit's cloak setting and sneak in, or attach a silencer to your sniper rifle and take out your human foes from a distance. If you would rather employ hit-and-run tactics, you can jump into the heat of battle, cause a ruckus, and use your suit's speed function to zoom away. However, Warhead is clearly focused on the guns-blazing approach, gently nudging you into full-on encounters with its mission objectives, character dialogue, and level design. When you reach primary and secondary destinations, you'll get besieged by large numbers of enemies, both human and (later on) alien. Given that human foes also don nanosuits, they're not necessarily quick to fall; as a result, these sequences are exciting and challenging, and you'll need to use your suit abilities and cover opportunities to your advantage. The easily triggered explosions of enemy vehicles and hazardous barrels further intensify these pockets of activity.

A number of set-piece battles confirm this slight shift toward action-packed mayhem. Your first encounter with a hulking alien war machine may not have the same impact as a similar one in Crysis, but it happens earlier than you'd expect, and it establishes the alien presence with adrenaline-fueled drama. That battle is a wonder, as is a later defensive mission that has you fending off a series of aliens, and requires you to shift focus frequently and use every weapon in your inventory. Another great sequence is a train level that, at first, seems much like similar sequences in a number of other shooters. You can stay on the train and use turrets to gun down the opposition, as expected--but you can also jump off and engage the opposition at any time, giving even this near-cliche sequence plenty of replay value. A linear journey through an underground mine is the obvious misstep in regard to level design, given that it never so much as hints at the open-ended action that makes Warhead a superb shooter.

If you played only that level, you also wouldn't see the host of improvements that power the action, particularly the improvements to alien artificial intelligence. The general design means that these robotic rivals will occasionally still be floating around above you, but they have more obvious smarts now, and they find ways to pummel you with ice pellets while remaining just out of sight, staying on the move, and using cover more often. Human enemies also seem more aware of their surroundings, flank you more often, and activate their nanosuits' armor to minimize damage. They also use the limited visibility that the jungle affords them quite well, hiding in brush to stay just out of sight. There are some remaining problems, particularly if you take potshots from a distance. Occasionally, the AI won't react when you snipe at an enemy, and foes using turrets will sometimes let you walk right up behind them. On the whole, however, Warhead makes clear improvements over the original in this regard, which in turn makes for better combat overall.

Vehicles feel sturdy, which is just as well, because you'll be driving them often, either to cover ground more quickly, or just to take pleasure in mowing down enemies with your mounted weapons. You can have a good deal of fun blazing a trail through the jungle while showering your foes with steel death, and the destructible environments further exaggerate the devastation. A scene in which you speed across the tundra in a hovercraft is done particularly well, offering a good sense of speed but pushing you into enemy hotbeds, giving you the chance to stop and fight or zip away with a quick glimpse of Koreans riddling aliens with bullets.

The improved vehicle handling is also noticeable on one of the new multiplayer maps, on which two teams battle in--and out of--the tanks and helicopters scattered about. This is good stuff, and it showcases Warhead's new Team Instant Action mode, a mode noticeably missing from the original Crysis. It's just good old Team Deathmatch, but it's done well, and the maps are improvements on those of the original. Snipers are still a threat, but the size of the maps are better suited to deathmatch battles, and more thought and care seem to have gone into small but important factors, such as weapon-cache placements and player spawns. The Instant Action and Power Struggle modes are still accounted for, and many of the original maps return, offering a large suite of online options that make online Warhead combat more appealing than its predecessor. Note that unlike Crysis, the expansion requires the online component to be installed separately, and isn't accessible from the single-player game.

Both online and off, Warhead is a beauty. As mentioned before, the game looks better than Crysis, and it runs better too. A test machine that struggled a bit to run the original at high settings ran Warhead smoothly with the same settings. Yet as much as you may have heard about Crysis' technical prowess, you'll still be impressed when you feast your eyes on the swaying vegetation, surging water, and expressive animations. Don't overlook the improved art design, though, which surpasses the original's oft-sterile look thanks to several striking vistas, such as one featuring an icy naval vessel stranded in the frozen tundra. The audio is almost as terrific. Various creaks and groans make heading down a narrow glacial pathway all the more harrowing, and weapons sound appropriately powerful. The voice acting is strong, and the understated soundtrack sets the right tone without ever getting in the way.

Warhead's single-player campaign should take you no more than six hours or so to complete, but not only does it invite multiple play-throughs, it costs only $30--and doesn't require you to own the original. In other words, there is no reason why anyone with a capable PC shouldn't play Crysis Warhead. It's more focused, it's more intense, and though it doesn't provide as much of the sandbox feel as Crysis veterans would wish for, it still delivers on every other front. Play this game. 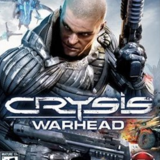