Those looking for an engrossing RPG experience and a decent 3D adventure may want to check out Crusaders of Might and Magic.

Don't you hate it when monsters storm your village, kill your family, and leave you for dead? Well, if you own a PlayStation and don't mind a little role-playing action, you can exact revenge on those bony freaks. In 3DO's Crusaders of Might and Magic, you star as Drake, a hardened hero with a flair for magic and a penchant for butt-kicking. Suckered by the fair Celestia into ridding the land of Necros' undead legions, you'll travel back and forth across nine areas of dank forests, majestic castles, and depressing dungeons. Whether you're in the oppressive stronghold, the majestic citadel, or on glistening glaciers, you'll encounter quirky villagers, macho guards, and a near-limitless cadre of vile demons. At its core, Crusaders of Might and Magic is a 3D action role-playing game, akin to a fantasy version of Soul Reaver. As Drake, you can run, jump, climb, attack, and dole out magic like it's going out of style. Most of the time, you'll be running about swinging your weapon at enemies, acquiring items, or yapping with the locals. To even up the odds, a variety of swords, axes, maces, and other handheld attack accoutrements are at your disposal. You've also got plenty of shields, spells, and assorted healing potions to support your endeavors. As the game progresses, you'll acquire even better weapons and more spells, while continually increasing your experience and stamina levels. The monsters you face have vulnerability to or strengths againstcertain weapons and spells, further contributing to the game's lasting appeal. Survive through to the end of the crusade, and a satisfying battle with Necros awaits, provided you can defeat the sheer number of demons the last few levels throw at you.

Though Necros' henchmen are no slouches in the difficulty department, the game's control system is actually the greatest learning curve that prospective players must surpass. Indeed, it is somewhat of a bear to switch weapons or items during the heat of combat, since hitting select, then X, then left or right, then select again is a pain to do hundreds of times, especially when you've got ten shields and 30 spells weighing you down. Still, it's no worse than the submenu systems of Resident Evil or Tomb Raider. If you can see past this solitary quibble, the fighting system is enjoyable, and exploration is easy enough. Furthermore, who doesn't want to go around brutalizing the undead with a weapon called Divine Justice?Visually, Crusaders of Might and Magic serves up the goods in a crisp, clean, and refined way. Corridors, dungeons, forests, and castles are all well detailed, replete with torches, tapestries, vines, and a plethora of other interior-decorating niceties. The polygonal character models are, for the most part, exceptional, with a believable level of animation. Loose-fitting clothes flap in the breeze, swords emit sparks on impact, and enemies even hunch over in pain as your fireballs of death implode their insufficient chest cavities. When you find yourself approximately 30 minutes into the game and notice the gleam off the captain's sword, you too will be at least somewhat impressed. There are minor amounts of texture-warping and clipping issues here and there, but no more than those found in Soul Reaver or Shadowman.

The game's sound is also above average, delivering the type of experience that fantasy fans eat up. The music is both enchanting and varied, leaving little room for complaint. There's a decent mix of classically orchestral and New Age-style music, which adds to the game's somewhat medieval appeal. Weapon sounds are also exceptional, varying in both pitch and timbre, depending on where and what they impact. Even more impressive are the grunts, growls, and guttural utterances the Legion monsters produce - so scary that even Resident Evil fanatics will take notice. Like a cherry on top, there's also plenty of character-interaction speech, which furthers the game's intricate plot while breaking up the monotony of exploration.

Admittedly, Crusaders of Might and Magic isn't the best role-playing game nor the best 3D adventure title. However, it represents an ample merger of the two genres, aiming to please those who desire both plot and variety in their dungeon adventures. While those burned out on games such as Tomb Raider, Soul Reaver, and Shadow Man may want to steer clear, those looking for an engrossing RPG experience and a good 3D adventure may want to check out Crusaders of Might and Magic. 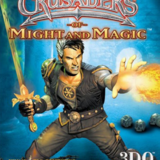