Crucible attempts to do too many different things with the same limited roster of characters, losing its few strengths in the process.

Editor's note: Just over a month after its full release, Crucible is going back into closed beta. The game will still be accessible, but the development is actively soliciting feedback from players. Our review below is based on the game's time as a full release in May 2020.

It's easy to recognize Crucible's many design influences. The Amazon-published third-person multiplayer game features hero-style characters with abilities similar to those found in Overwatch. Its one MOBA-centric game mode should feel familiar to you if you've played Smite or the now-defunct Paragon. And even its light progression system echoes the one found in Gearbox's Battleborn. Crucible attempts to remix a lot of existing ideas and cohesively tie them together into something more successful, but as a result, it fails to create an identity for itself.

Crucible takes place on an alien planet primed for off-world mining, which plays host to three game modes on its single map. Heart of the Hive is as close to a MOBA as Crucible gets, with a focus on PvP and PvE play as two teams fight to secure the hearts of dangerous hives. Alpha Hunters is a spin on battle royale, with teams of two skirmishing in short matches. Lastly, Harvester Command combines traits of team deathmatch and classic point control, rewarding players for kills and the number of objectives controlled on the map. In each mode, you have a choice to play as one of 10 characters, each with a handful of unique abilities and unlockable traits.

Heart of the Hive is the main event, pitting two teams of four against one another on a large map filled with AI enemies as you hunt down periodically spawning hives and attempt to capture three of their underlying hearts. Like in most MOBAs, you kill these enemies for XP, levelling up your character to improve your health, damage, and ability effectiveness. But in Crucible, there's no challenge involved in killing these enemies; it's easy enough to tackle a large group of them alone without any risk, dancing around their slow and predictable attack patterns. It reduces the necessary farming of experience to a mindless annoyance, made even more irritating by the fact that it's predominantly how you'll spend most of your time in this mode.

Fighting other players is generally reserved for showdowns around each objective hive, as no other objectives on the map are advantageous enough to risk the near-30-second respawn timer that follows each death. This also makes each of these big team fights an all-or-nothing affair. The time it takes for you to both respawn and attempt to move back to a hive if you die is far more than it takes for the opposing team to kill it and retrieve its heart, giving you no reason to attempt a comeback. And Crucible's only map feels far too large for the team size Heart of the Hive restricts you to, which in turn highlights how sluggish most characters' movement feels in the process.

Some characters boast abilities that directly alleviate this problem. Tosca, a humanoid space squirrel, has three dashes with short cooldowns that you can use to zip around a skirmish with ease, while Earl, an alien space trucker, carries around a minigun with a rocket at the back that allows him to jet around the map at immense speed. Other characters, like the dual flamethrower-wielding Summer and melee-focused Drakhal, feature shorter forward dashes that can only be used sparingly, while others, like Shakirri, feature none at all. Given how much time you spend travelling, waiting for something to happen in a map that feels remarkably empty, you're likely going to be drawn to characters based on their ability to speed things up over their overall effectiveness in a fight.

It's a shame because most characters' abilities are fun to learn. Sazan, for example, requires you to juggle through three weapon types as you fight, each of which has limited energy and needs to recharge. Knowing which weapons will need to cool down next and understanding the limitations of the one you're about to swap to makes focusing on positioning crucial, which can feel exhilarating when you start finding a rhythm to it. Similarly, Bugg is immensely fun to use against players too greedy for their own good. Being able to frequently throw down plants that do large amounts of damage to foes can help you lead enemies along fatal chases, while also giving you ways to control a fight without needing to fire off accurate shots.

These types of abilities stand out in contrast to the mostly limp third-person action, though, which permeates every character's gameplay in some way. Shots from Mendoza's rifle or Ajonah's extremely long-range harpoon gun lack any impact when connecting with a target, sapping the satisfaction from a well-executed ranged attack. Melee attacks feel equally powerless, with an opponent's depleting life acting as the only affirmative indicator that you're actually hitting anything. Crucible also lacks an informative visual language that lets you know when enemies are affected by abilities, making it difficult to make crucial decisions in chaotic skirmishes.

Each of your character's abilities are unlocked at the start of the match, and with each new level, you can unlock passives that alter them (such as reducing cooldowns, improving attack range, and more). This only applies to the first five levels, three of which give you some limited options to choose from. You can choose which of your abilities to enhance at each of these levels, but Crucible doesn't let you do that during a match. Instead, you have to make these choices beforehand, giving you no chance to adapt your build in any way as you start identifying the types of players you're up against. It makes the already shallow flexibility all but meaningless, forcing you to get comfortable with a type of playstyle rather than trying to actively react to your opponents.

This is exacerbated by the fact that Crucible also doesn't let you pick your characters after you've been matched with other players, or change your decision during a match. Instead you have to make a character selection before searching for a game, and then hope that you're matched with other players that complement your choice. Given that a character can be picked multiple times within the same team, you can often get matched in comically unbalanced and unviable teams, making the match an unnecessary uphill battle before it begins. Combined with the inability to quit a match until it's over, even in cases where other players have left, and it makes searching for games alone an infuriating lottery.

If you do manage to find yourself on a well-balanced team, communicating with teammates is challenging. Crucible features no native in-game voice or text chat, and its included ping system isn't as accurate or contextually useful as it needs to be. The decision to omit these features was a conscious one in an attempt to curb toxic behavior, but it's difficult to reconcile that when Crucible encourages players to team up with strangers via its Discord channel from the main menu. This just adds an additional step to the process to achieve the same thing, not avoiding the core issue, while subsequently making it more arduous for players to effectively communicate in a game that requires it.

These omissions are more forgiving in Harvester Control, another one of Crucible's game modes, which shifts the focus to a control point and team kills instead of coordinated team fights. Five harvesters littered across the same map are up for capture, each of which adds additional points to every kill your team gets. It's a tug-of-war between rotating around objectives while also hunting enemies, and with the increased player count of eight per team, it makes the map feel a lot more active. The change of focus encourages you to pick characters that deal more damage and leaves more utility-focused ones out of view, but the faster pace and increased PvP fights do make these matches more engaging overall.

The last of Crucible's game types is its own spin on battle royale called Alpha Hunters, pitting pairs of players against each other in short matches. Out of all three game types, Alpha Hunters functions the worst with all the different character types, and suffers even more if you're planning to play it with another random player. The one silver lining is its approach to forming dynamic alliances with players as the match progresses. If you lose your teammate and find another player in the same position, you two can form a new alliance instead of taking each other out. It's an easy process to enact while playing too, with just a button press required by each player to suggest and accept the alliance respectively. Considering the mode becomes a free-for-all once you're down to the last three players, the unease of wondering whether to offer an olive branch knowing that you'll need to retract it later is a thought-provoking idea that I wish existed in a much better mode overall.

In many ways, this epitomizes the central theme of Crucible. Its enticing characters and their occasionally exhilarating abilities are undermined by the unsatisfying third-person shooting underpinning them. The game's three modes all attempt to stretch the already inflexible mechanics of each character in ways that make each one feel underwhelming, in spite of their more interesting ideas. Most of all, Crucible just doesn't play host to the coordinated teamwork it demands for balanced matches, forcing you to look elsewhere or gamble with the chance of being matched with players that complement your character choices. It's a game that fights itself at every turn, and ultimately is little more than a curious distraction from other players in this space rather than a true competitor for your attention. 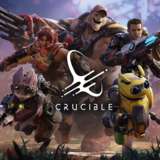 Alessandro blinked around as Tosca and enjoyed setting enemies ablaze with Summer across 15 hours with Crucible and its rag-tag roster of characters. He also thinks the space snakes are pretty cool and wishes he could be friends with them. 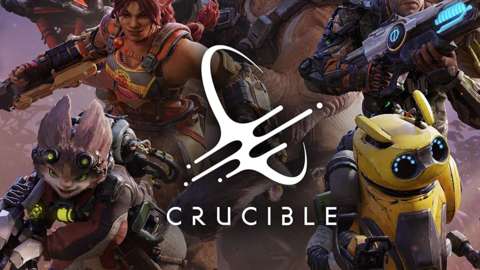 Crucible is a competitive team-based shooter driven by the choices you make.