Croc: The Legend of Gobbos Review

Croc just didn't live up to its potential.

Fox Interactive's Croc: Legend of Gobbos sees its player as a genuinely cute platform hero - something I never thought I'd ever say about a video game character - who must explore a 3D Super Mario 64-like world, in search of his kidnapped gerbil-esque friends, the Gobbos.

Yep, that's right, the evil Baron Dante and his Dantini followers have stolen away Croc's pals and spread them out equally all over the world, so as to always have one around to harass if the need arises. Now it's up to you to run, jump, climb, and swim your way through 45 levels made up of forest, desert, ice, and Dante Castle stages, freeing the Gobbos from their PETA-unfriendly cages all the while. If you're really good and can make it to the secret island, there's a secret boss on a hidden island to beat, as well - making it, all in all, a handsomely sized game. It's just some of the gameplay that takes place over those levels that makes the whole thing a little questionable.

Croc can easily be seen as the sum of many previous video game parts. The character possesses the butt-stomp of Mario from Super Mario 64, the tail-spin and climbing ability of the same-named lead of Crystal Dynamic's Gex, and bits of Sega's Sonic the Hedgehog, as well. A few other games can be noticed at times, too. But that's all right if the game's fun, right? Sure, and it almost is.

Without a doubt, it's an impressive achievement that Argonaut was able to nearly emulate a Super Mario 64-style 3D environment on the Sony PlayStation, though it's less impressive that it wasn't able to imitate the game's perspective and control. The creators of SM64 knew that to be able to functionally jump from platform to platform, the default view would have to be directly above and behind the main character, and it is, or can be configured to be, about 95 percent of the time. In Croc however, the player is locked into a behind-and-to-the-side view during about half of the game's crucial moments, making jumps or even general movement far harder than they should be. In the beginning, this is far less of an issue and Croc shows off how much of an enjoyable title it could have been. But soon, moving platforms, dissolving platforms, and other such devices are added to the mix and the fun factor of the game falls off a cliff. Yes, this perspective/control problem makes it that horribly frustrating to play - even the use of Sony's Dual Analog Controller can't save it. 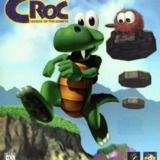