Critical Blow is a game that is worthy of a US release, but will probably never see the light of day over here.

3D fighting games are a dime a dozen in the States, but for every title that comes out here, there are two or three more that stay in Japan. Critical Blow (and its predecessor, Shadow Struggle) is a game that is worthy of a US release, but will probably never see the light of day over here.

The game is pretty much the same as the rest of the fighting games out there. It's a two-button (one punch, one kick) game, and the special and super moves are done Street Fighter-style. The tournament mode is essentially the same as every other fighting game. Theater mode tells the story of the character Rickey. Basically, you watch a short animated FMV sequence, scroll through some Japanese text, then fight. Rickey is the only character available in this mode. Trading mode is where the game gets pretty cool. You start out with any one of the game's characters and fight characters for cards. Each of these cards powers up your fighter in different ways. Characters can gain speed, offensive and defensive strengths, and even get other characters' moves and other special abilities, including healing and a move that fills your super meter all the way up. If you win, you take cards from your enemy, but if you lose, they get to take cards from your stockpile. These beefed-up characters can then be taken into tournament mode or vs. mode.

Critical Blow's graphics are pretty nice, although they're also a bit blocky. Most of the backgrounds are pretty dynamic, from fighting on top of a speeding train, to fighting on a mess of girders at a construction site. The characters animate well, and the game runs smoothly. The music is generic, but the sound effects are nice. Laser beam attacks and explosive fireballs both sound really nice.

The game plays well enough, and the trading mode serves as a sort of "construct-your-own-fighter" mode, extending the play value and keeping things interesting. This one has been around for a while, but no one has picked up the US rights to Critical Blow. All of the important text is in English, so if you're looking for a quirky little fighting game, import this one without fear. 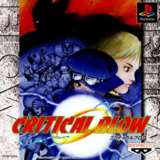 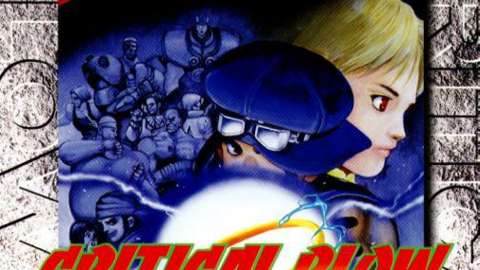 Critical Blow is a game that is worthy of a US release, but will probably never see the light of day over here.