While Xbox Live launched alongside several solid online games, the one that really stood out as a winner, almost immediately, was Microsoft's giant robot shooter, MechAssault. The hot action, combined with some nice mode selections (which were only enhanced over time as downloadable content was released) made the game a smash hit. Now, nearly one year later, Microsoft is in the position of doing what it can to keep the service's initial subscribers onboard for another year of Xbox Live. So what better way to do it than with another great online shooter? Crimson Skies: High Road to Revenge takes the hot action to the skies for some furious dogfighting, and it does so with the same brand of pick-up-and-play as MechAssault. However, Crimson Skies does it at an even faster, more exciting pace, and does so without sacrificing the quality of the single-player game.

While playing the game online almost makes the single-player seem insignificant by comparison, the game's single-player campaign is very well done. The game is the same sort of mission-based flight simulator that you'd expect from a Wing Commander or Star Wars Rogue Squadron, but its structure and design is a bit different--and better. When it comes to this sort of mission-driven simulator, one level-type almost always brings the game to a halt: the defense/escort mission. Let's face the facts. Defending a large, sitting duck of a capital ship simply isn't as much fun as raiding enemy encampments or dogfighting with smaller targets. Crimson Skies has its fair share of defense missions, where you'll be protecting zeppelins or encampments from incoming attackers, but the game handles these missions pretty well. Rather than requiring you to baby-sit your zeppelin to prevent it from exploding, the targets you're defending tend to be fairly tough. Therefore they can stand up to some punishment, allowing you to go off and dogfight against enemy planes without having to always keep both eyes on your prize. Though these missions still aren't quite as fun as, say, the level where you man the gun turret on a moving truck and blow planes out of the sky while also destroying several airplane hangars, this slightly easier take on the formula really makes all the difference in the world, and it prevents you from having to meticulously play the game's escort missions to proceed.

The campaign is broken up into areas, and you'll often have more than one mission at your disposal, though only one path of missions takes you to the game's next plot point; the rest are just for show, letting you collect money that can be used for repairs or upgrades to your planes. The game's story takes place in an alternate version of the 1930s that saw the nation's railroads torn apart by wars between fiefdoms that run what's left of North America. With no railways to transport goods, society turns to the air, and large zeppelins are now used to move things from one place to another. This opens up the world to air piracy, and you play a pilot named Nathan Zachary, a smooth-talking Indiana Jones-type who leads a ragtag group of freelancers known as the "Fortune Hunters." After an opening cutscene in which Nathan steals back the plane he lost in a drunken poker game the previous evening, the game gets under way. The single-player campaign is of average length, clocking in at around 10 hours, but the game's optional missions and plane upgrades keep it interesting and fun.

Regardless of what mode you're playing, flying planes is already fun. The control is pretty streamlined, making it easy to learn, but there's definitely some depth to its gameplay. You can control your speed, to a certain extent, and you can also perform evasive maneuvers, like rolls and Immelman turns, with the right analog stick. Boosting your speed and performing stunts both drain your special meter, but it recharges quickly when it's not in use. You have a primary gun, with unlimited ammo, and a secondary weapon, with limited ammo, at your disposal, and some of the game's machines give you the ability to zoom in for a better shot. The game has a good collection of different planes. You can pick from them right off the bat in multiplayer, while in single-player you'll only be given the option to fly a plane, at will, once you've discovered it in one of the levels. You start out in a pretty strong plane, known as the devastator, but you'll earn the ability to fly plenty of other planes with a variety of machine guns, rockets, and railgun-style sniper shots. You'll even gain access to a gyrocopter that can stop completely in midair, which makes lining up those sniper shots a bit easier--at the expense of making you an extremely easy target.

As cool as the game's single-player section is, the online mode is where the real action is at. Up to 16 players can compete in six different games on five different multiplayer maps. Dogfight and team dogfight are simple shoot-'em-ups. Keep away is also available as a solo or team affair, and it works as a king of the hill game, where one player or team must collect and hold an item for a specified amount of time. Flag heist is your basic game of capture the flag, while wild chicken has the players chasing down a flying chicken for bonus points--in addition to trying to shoot each other out of the sky. Though standard free-for-alls are exciting, the capture-the-flag mode is the one that feels like it has the most depth. The game also has support for downloadable content. Though nothing is available at this time, it's pretty safe to assume that we'll eventually see more maps and/or modes added to the game.

The game works very well online, and though you may notice a slight lag between the time you touch an item and the time the game registers you as having picked that item up, this doesn't happen on every server and doesn't get in the way of the action at all. Crimson Skies contains all of the player-matching features you've come to expect from an Xbox Live game. It also lets you play along with one guest on your system in a split-screen, and it keeps a good ranking list that lets you know where you stand against the rest of the world's flyboys and girls. If online action isn't your bag, the game also has system link support and four-player split-screen capabilities, though, this form of multiplayer isn't necessarily as exciting or convenient.

Backing up all this great action is a fantastic graphical presentation. The game gives you a good, long draw distance, allowing you to see incoming planes from pretty far away. Additionally, the game gives you a good look at the lay of the land. The texture work is well done, and the plane models are just plain cool. This is especially true of the devastator, which looks like a biplane but has its propeller in the rear. The weapons look nice, particularly as bullets are flying through the air, but it's the damage they do to their targets that makes them so impressive. The planes break up very nicely, as they're shot to pieces and set ablaze, and the explosions that finally send them down look really great. Smoke pours off of damaged planes, giving you an easy path to follow when you're tracking down an enemy. All the while, the game runs at a slick frame rate that keeps the action moving at a speedy pace. Owners of high-end TVs will find 480p support waiting for them.

The game's great music, along with Nathan Zachary's confident, lady-killing charm, gives the game a nice atmosphere that flies in the same airspace as the Indiana Jones series. That atmosphere is compounded and enhanced by the game's strong voice acting, which benefits from a well-written script. The game's sound, which supports Dolby Digital 5.1, really adds to the experience. The combat sounds great, and the planes all have individual engine sounds, but the little touches, like the way you hear air rushing past as you swoop around at regular speed, are what really drive the point home.

The awesome online mode and strong single-player segment combine to make Crimson Skies an easy game to recommend to Xbox Live subscribers, and the enclosed two-month free trial lets nonsubscribers give it a shot--free of charge. While it would certainly have been nice to see more multiplayer maps--right off the bat--the five levels and different modes included provide hours of excitement. If you needed to find a reason to stay connected to Xbox Live for another 12 months, look no further. 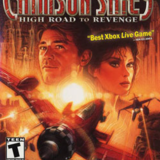 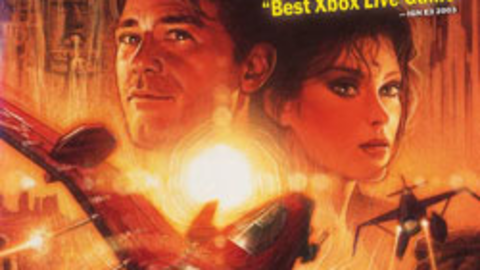 8.5
Sign In to rate Crimson Skies: High Road to Revenge