If you're looking for a game in which you can shoot up or cut up hundreds of ugly aliens for hours on end, you've come to the right place.

Crimson Sea 2, exclusively available on the PlayStation 2, is the sequel to a sci-fi-themed action adventure game released early last year, exclusively for the Xbox. That's kind of a strange shift, but then again, this is kind of an unusual game. Publisher/developer Koei, which is celebrating its 25th anniversary this year, is known among gamers primarily for its historically-themed action and strategy games. So it comes as no surprise that Crimson Sea, with its Hong Kong comic book-style visuals and far-flung futuristic characters, seems like a departure from the norm. Anyway, it's a good, solid game that throws lots of fairly straightforward but satisfying hybrid hack-and-slash/third-person-perspective-shooter levels at you. Additionally, it features a nonlinear framework and some role-playing elements that lend a bit of depth to the proceedings. This sequel isn't remarkable-looking, though it runs smoothly, and the new two-player split-screen modes aren't a major attraction. However, if you're looking for a game in which you can shoot up or cut up hundreds of ugly aliens for hours on end, you've come to the right place.

You don't need to be familiar with the first Crimson Sea game to dive right into this one. If you want more background information, there's an extensive in-game primer on what happened in the first Crimson Sea. Still, the storyline stuff can safely be ignored, since most of it consists of rather dry textual dialogue that you have to read off of the screen, and a lot of the science fiction is pretty dense. While the particulars of the plot are somewhat unconventional, the premise boils down to your standard save-the-universe-from-the-alien-menace type of thing, and, in fact, the alien menace in this case is known only as "the menace." Things don't get much clearer or simpler than this.

If you know the original game, then you'll be familiar with Sho, Crimson Sea 2's protagonist, who's more or less your prototypical anime hero, complete with feathered hair and a big-collared shirt. Sho is special in that he wields the power of neo-psionics, which are essentially magic spells that are capable of devastating large groups of the menace. However, his guns and his blade will be doing most of the work here. During the course of his missions, he'll encounter Feanay, a new playable character dressed in a terribly short skirt, which apparently does not constrain her from dealing lots of damage with her energy pistols and dual laser swords. Feanay can use neo-psionics too. Once you've discovered her, you can freely switch from playing as Sho to Feanay between missions. Some missions are available only to a specific character, but Sho and Feanay really aren't very different in gameplay terms. Their weapon properties are distinct, but you won't have trouble readily switching off from one character to the other.

There are dozens of different missions in Crimson Sea 2, but they're not all that different. It goes like this: You teleport into a hotspot of some sort from your base of operations. Then, you'll run through some pretty simple levels, which include mostly hallways, tunnels, and large open spaces, while fighting hordes of the menace. The menace come in a few different varieties, including buglike things that swarm you, man-sized reptile things, some rather dexterous humanoid enemies, misshapen mutants, flying grasshopper things, and more. However, dealing with them tends not to be overly complicated. You basically just start blasting or slashing away. You can lock onto an individual target when you need to concentrate your attack on a tougher opponent, and while locked on, you can execute useful, quick evasive maneuvers in any direction to keep the menace swarms from overwhelming you. It's typical to face dozens of creatures at the same time, and while the action has somewhat of a hollow feel to it as you constantly knock droves of menace flat on their hindquarters, at least there's a lot of pure action. Some optional combo moves are available to lend a bit more dramatic flair, as well as a bit more complexity, to all the combat.

There are multiple missions set in each of the game's locations. Sometimes you'll just need to work your way through the level by killing everything that moves. Sometimes you'll need to reach a specific point in a certain amount of time. Sometimes you'll need to escort a certain character, who'll guide you, through the environment. Sometimes you'll end up squaring off against a big, tough boss monster of some sort. Sometimes you'll have to collect some number of some type of item before the mission is a success. Sometimes you'll be asked to deal with particular foes in a particular fashion, such as by identifying your true foe from among a pack of identical illusions by spotting the real thing on your minimap or by having to use specific weapons to finish the job. Sometimes you'll just need to find something. Since you'll revisit the same basic areas several times, and since you'll be fighting the same types of enemies often, the action can grow rather repetitive after a while. But the little twists to the missions keep things from growing too stale, and in the end, you're left with an action adventure game with a lot more meat to it than most.

The game's role-playing elements can make Crimson Sea 2 pretty addictive. As you put down the menace, some of them will drop "origins," which are items that can power up your guns, blades, or neo-psionics. Additionally, your characters earn money and experience points with each successful mission. The immediate effects of powering up your characters, whether by gaining experience levels or by enhancing their attacks, are pretty subtle, but they are noticeable over the long run. And while the action itself is basically very simple--as mentioned--there is some depth to it in that certain special timing-based moves and combos can be used to lay down the law much more readily than if you just pounded the attack buttons. Soon you can be popping enemies into the air with your swords and then finishing them off with your guns, Devil May Cry-style. Also, Crimson Sea 2 introduces a Max Payne bullet time-style effect. Sho and Feanay have a limited ability to cause the action around them to slow down for a few moments, during which they can really pound on their foes. This effect can be triggered manually, but it also automatically kicks in when you rack up a sufficiently high combo, which encourages an aggressive play style.

Crimson Sea 2's two-player split-screen option features challenge, cooperative, and versus modes. Selectable characters include Sho and Feanay, plus there are several unlockable extras that are usable only in multiplayer. The versus mode is the worst of the bunch, given that the game's combat system isn't really intended for this sort of gameplay. The co-op mode is better and charges you and a friend with laying waste to legions of menace together, which can be fun for a while, though you can't use the bullet-time-style "time extend" or neo-psionics here. You just keep hacking away for as long as you can. The challenge mode requires you and a friend to compete in a high-score challenge by trying to be the first to kill as many of the menace as necessary. In all, the multiplayer portion of Crimson Sea 2 is a decent addition because it controls as well and runs as smoothly as the single-player game. However, the single-player portion is where most of the action is.

The game looks pretty good, overall. The visuals are very functional, if nothing else. Crimson Sea 2 runs fast and smooth even when tons of monsters are onscreen, but that's at the expense of some detail. Environments are blocky and are often pretty bland, though there are some decent ambient effects to be found. The various types of menace look appropriately...menacing. Sho and Feanay look pretty good in motion, though some of their animations (such as when they jump) look stilted and jerky. Also, it's kind of a nitpicky detail, but while you can use the analog stick to make Sho and Feanay move at different speeds, their animations always represent a full-on run, which looks pretty bad when they're only moving at half a mile an hour. Other than that, the game's character models are pretty simple. Furthermore, its occasional prerendered cutscenes are pretty good, but they aren't that great. The audio, meanwhile, is mostly forgettable, apart from the weird title track, which features some rather shrill vocals. The in-game action is overwhelmed by the constant zapping noises of Sho and Feanay's weapons and the subsequent explosions caused by them, which sound OK. The occasional voice-over is delivered forcibly, so it's probably what you'd expect from an anime-styled game.

Crimson Sea 2 has a lot of content, though all of it's a variation on the hack-and-slash theme. However, what's important is that the core action is basically good enough to sustain the game. As such, fans of Koei's other action offerings should appreciate this latest game for similar reasons, and anybody looking for a longer-lasting-than-usual action adventure would do well to check this one out. Don't go in expecting a spectacular production, but know that Crimson Sea 2 has a lot of the basics all figured out, which is far more than can be said for a lot of other games. 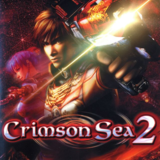