Crimson Gem Saga is a simple role-playing game containing a much more arduous journey than its cheery presentation suggests. Annoying dungeon design and numerous other quirks undercut its functional competence, while a lack of originality and intrigue round out an overwhelmingly bland adventure. The game offers little more than mediocrity and a pleasant visual appeal.

The plot is largely dull and unimpressive, following a predictable path that fails to enhance the adventure. You're cast as Killian, an inexperienced knight desperately seeking work with the local militia. After stumbling upon a manipulative treasure-hunter, however, you're tricked into collecting the infamous Wicked Stones, which are priceless gems with sinister powers. This generic storyline is worsened by flat characters and scripted relationships that feel pulled from any random anime, which is hardly captivating.

Cozy, nearly therapeutic field exploration showcases the game's stark simplicity, which should interest those who tire of mastering complicated features and muddling through vast forest mazes. A convenient map overlay quickly guides you to your destination, while random battles have been replaced by an ambush system that awards you a bonus attack for catching enemies off guard, providing the majority of the game's tactical value.

Unfortunately, this simplistic approach extends to the bare-bones turn-based combat system that highlights the game's banality. You're limited to the usual options--attack, defend, item--and you can efficiently rely on basic attacks for defeating most enemies, which requires little forethought. However, if you score a critical hit you have the opportunity to deliver extra damage with your next character's attack if you press the onscreen prompt in time. Skills slightly enliven the experience, granting you basic spells such as fire and poison, and also allow for powerful combination abilities that characters perform with partners. However, the majority of your enemies are fairly weak, so these powerful abilities feel like unnecessary time-wasters unless you're fighting bosses. Battles also progress somewhat slowly, with slight delays between skill selection and execution as well as no option to skip attack animations, all of which adds up to a competent but mundane combat system.

Dungeon exploration, unlike that in the world above, is especially tedious and unnecessarily complicated, and you're frequently tricked into going in circles. Dungeon designs make heavy use of repeated tilesets without showing connecting areas, making it much too easy to get lost. The lack of dungeon maps intensifies the problem as you encounter more devious puzzles, so don't be surprised if you're stuck scribbling primitive maps in a notebook. A subdued color palette disguises doorways, because some points of interest have no discernable marks to adequately differentiate themselves from the background; this is frustrating because you're forced to keep a very sharp eye on your environment's fine detailing as well as the enemies you're attempting to dodge. Enemies respawn every time you reenter an area, which is aggravating when you inevitably get turned around. It's also difficult to spot objects that are puzzle elements you should interact with, because they look the same as items that are purely aesthetic.

Mindless grinding--engaging in repetitive battles--seems overly emphasized and drains a lot of fun from the gameplay. You'll encounter significant jumps in difficulty as you enter new areas, even if you're faithfully trudging through battles, which pressures you to both level before entering an area and purchase more expensive gear. This is because your weaponry seems to determine your combat prowess more than any tactics or stats, which is irritating because the equipment becomes a prerequisite to a relatively successful dungeon trip. Upgrading therefore requires boring grinding to collect the necessary cash to cover steep equipment costs.

The environments are aesthetically pleasing, with plenty of lush jungles and pretty forests to explore. The color scheme is subdued to produce a more striking visual effect, while character sprites--from your party to adorable monsters--are intricately detailed and bright. The action is supported by soothing music subtle enough to enhance key moments before slipping quietly into the background, which is perfect for lengthy travels. Relaxing ambient noises, like the fluttering of tiny birds across an open meadow, add to the mellow atmosphere and pair well with the charming background tunes. Character voicing is periodically ridiculous due to a few exaggerated outbursts, but is usually decent and reserved for key events, making it more than tolerable.

Even if you choose to ignore optional side quests, playing through the main story should take you around 40 hours. Regrettably, much of that time is wasted on grinding, running in circles, or completing dull fetch quests. There's also some backtracking, but not so much that it gets annoying. Of greater concern is the game's failure to stand out from the crowd or immerse you into the gameplay. Crimson Gem Saga is initially satisfying as a lighthearted role-playing game, but it's soon bogged down by tedious grinding and arduous dungeon trips. A no-frills combat system, unimpressive features, and a lack of originality further compound the monotony. You're better off with an RPG that isn't a standardized template for the genre, even if it's not as cute. 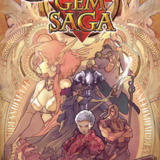 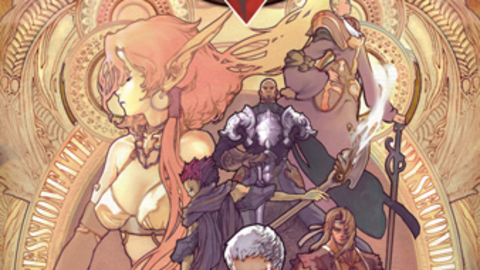 Crimson Gem Saga is a turn-based RPG for the PSP.