The Creature has laid out a dozen traps, all of which can only be deactivated by the glowing ball carefully balanced on the tip of my sword. At a glance, I can tell it's going to take an impressive display of geometry to bounce the ball into every target before an approaching laser cuts me in half. The Creature threatens that a worthless piece of trash like me has no place in its mountain before it disappears back into the shadows with a haughty growl, convinced that at least one of its pinball death machines will stop me. Unfortunately for me, this time around, it's right, and the Creature smugly returns to pick my limp body off the floor and throw it out of its well. After muttering a few curses under my breath, I pick myself up, restructure my loadout, and head back into the monster's home.

In Creature in the Well, you play as BOT-C, a robotic engineer tasked with maintaining a weather machine that's built into a mountain and designed to dispel the constant sandstorms that blanket the town of Mirage. Angry at the townsfolk for encroaching on its home and "worshiping" a machine for protection against the storms, the Creature that lives in the town well breaks the contraption. You set out to undo the damage only to learn that the Creature has filled the caverns of its home with deadly traps to stop you.

Developer Flight School Studio refers to Creature in the Well as a "pinbrawler," a term coined by the studio to describe a top-down hack-and-slash dungeon crawler that utilizes pinball-inspired mechanics. It just so happens that the Creature's traps transform every room in the mountain into a giant pinball machine, allowing you to siphon energy from the bumper-like nodes that power the Creature's inventions by flipping balls into them. The energy you absorb can be used to unlock doors that lead further into the mountain.

This fairly straightforward concept of hitting balls into bumpers evolves into more difficult puzzles as you delve into the areas beyond the first dungeon. Additional concepts are introduced at a steady pace, building new types of enjoyable challenges on what the game has already established so you're not blindsided by whatever you're up against next. Early on, the game only really tasks you with learning how to bank your shot, presenting puzzles where you need to angle the ball off of walls to hit nodes in a certain order. But then Creature in the Well starts adding cannons that shoot at you, lasers that disintegrate you, and other types of threats that need to be deactivated or dodged while you're also trying to position for your next shot.

Few of the challenges in Creature in the Well are an equal combination of pinball and hack-and-slash. Instead, they fluctuate between the two to curate welcome variety in its dungeon-crawler gameplay. One room may not have a ball for you to use so you'll need to time your attack and use a shot from an enemy cannon as your ball, for instance, while another may task you with figuring out how it's possible to hit every node in a room within a specific time limit. Most of these challenges lean into the hack-and-slash inspirations and are more enjoyable as a result--largely because the flurry of frantically dashing between enemy traps as you try to calculate the trajectory of all the balls bouncing around the room produces the same thrill as battling your way through a difficult mob in a typical dungeon crawler.

The pinball-focused rooms are designed to be a test of your intellect, but none of them are overly difficult. As a result, they mostly just stand out in stark contrast to the more plentiful hack-and-slash rooms as the handful of moments in Creature in the Well when the action slows down. They're still good, but Creature in the Well is just better as a pinball-inspired action game than a geometry-focused puzzle one, as its hack-and-slash mechanics better lend themselves to quickly overcoming obstacles through good reaction and precision instead of repeated trial-and-error. Though Creature in the Well does occasionally repeat puzzles, these duplicates rarely show up and they're typically only after the game has given you a chance to expand your arsenal or encouraged you to learn a new strategy. Tackling these recurrent puzzles with newfound efficiency each time helps reinforce that you are getting better (plus, it's really fun).

Creature in the Well doesn't have much in the way of tutorials, but the game is fairly well-structured and teaches you most of what you need to know without exposition. The game never tells you that each room is optional, for example, but it provides enough opportunities at the start of the first dungeon to earn a surplus of energy so that you can try opening a few doors in the early areas without completing every puzzle. Likewise, almost as if it assumes most players will try, regardless, to complete every room at the start of the game anyway, Creature in the Well hides its first secret area relatively early in its campaign so that you learn hidden doors are only revealed by fully completing puzzles in certain rooms. In this way, you absorb enough of the basics to beat the campaign, but a few of the game's aspects that help alleviate some of its tougher challenges could have used additional explanation.

The game doesn't tell you how to heal in the hub area after dying, for instance, and it doesn't explicitly reveal what BOT-C's core upgrades actually do. Without this knowledge, moments of Creature in the Well can, at times, feel frustratingly stacked against you, though it thankfully never gets to the point where the disadvantage feels impossibly unfair. And it's likely you'll eventually stumble into these mechanics and features before Creature in the Well's story is through. However, these things--that there's a pool of water in the hub you can bathe in to replenish your health and that core upgrades allow you to pull off more powerful strikes that siphon off extra node energy--feel like crucial information. Learning the purpose of the core upgrades, specifically, helped alleviate most of the struggle I was having with the late-game dungeons.

There's an excellent diversity to each tool's effect--most of which seem inspired by traditional dungeon crawler powers and weapons--allowing for various playstyles.

These dungeons are each structured around certain thematic challenges. To help you better respond to a dungeon's specific test, every one contains a tool designed to handle its threats. For example, the Lockdown Systems mostly contains rooms with nodes that move or require you to strike balls through a tiny opening. This area hides the Dual Blades, twin swords that help you make precision and long-distance shots by revealing a ball's travel path, allowing you to course correct before you even swing. Every tool is fun to experiment with, and it's exciting to discover how you might use a new one. And though each tool is designed for its specific dungeon, their special abilities can be reapplied in different ways to overcome the challenges found in other areas. You're thus encouraged to return to dungeons you didn't fully complete to see if the new tools you've acquired can help you solve any lingering optional puzzles you previously couldn't get past.

Every tool is divided into one of two categories, charge and strike, and you can equip one of each to combine their special effects and build different loadouts for BOT-C. I most enjoyed pairing the aforementioned Dual Blades with the Focus Hammer, a strike tool that allows you to slow down time, to transform BOT-C into a sniper-like fighter. There's an excellent diversity to each tool's effect--most of which seem inspired by traditional dungeon crawler powers and weapons--allowing for various playstyles.

The best moments to test out these different playstyles are in Creature in the Well's boss battles--each located at the end of a dungeon and all of which see you go up against the titular Creature. Each battle sees the Creature throw several waves of challenges at you that you must complete in a single run, with each consisting of a culmination of more difficult variations of the puzzles seen in that particular dungeon--further encouraging you to fully explore every area and experiment with multiple tool loadouts in each one. The boss battles are fast-paced and demand a higher level of tactical awareness than the rest of the game, as the Creature will also just randomly outright attack you as you're trying to hit the nodes scattered throughout the arena. Whereas most of the dungeons allow you the time to dissect how a problem can be solved, the boss battles force you into piecing together the solution on the fly.

Though the abrupt change in pace between the slower dungeon puzzles and faster boss battles can be a little flustering, learning the different patterns of the Creature and overcoming them are gratifying challenges that require both careful aim and situational cognizance. Beating each boss rewards you with more dungeons to explore--and thus new challenges to tackle and tools to find--as well as lore-focused texts that further flesh out Creature in the Well's history. Though most of this lore isn't compelling enough to regularly be a fulfilling reward, the promise of more dungeons and new weapons eases away that disappointment.

Both Creature in the Well's dungeons and boss battles are also improved via the portrayal of its antagonist. The Creature is terrifying, largely because you never actually see the entirety of it or learn its motivations. From start to finish, the Creature is a pair of glowing eyes and skeletal arms, most of its body covered in shadow. It growls, taunts, and even threatens you, but it never reveals what it is, remaining this demonic-like enigma that refuses to be understood or stopped. The Creature appears at seemingly random points in every dungeon, watching you from just out of your reach and cultivating this paranoia that it doesn't even have a physical form for you to fight. So when you do actually win and manage to push the Creature back a little further into the mountain, the battle feels hard-won, a boss fight on par with one in a traditional dungeon crawler.

Creature in the Well manages to inject the geometry-focused experience of pinball into the frenzied gameplay loop of a dungeon crawler to craft a unique puzzle action game. On occasion, the game's hands-off approach to conveying information is a hindrance, but the well-structured dungeons and monstrous antagonist more than make up for it--producing an engaging hack-and-slash experience that allows for satisfying experimentation. 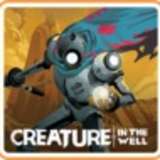 Jordan tore through Creature in the Well's campaign in seven hours and immediately dove back in to uncover the mountain's remaining secrets. He played Flight School Studio's pinbrawler on PC using a review code courtesy of the publisher.