CTR has the staying power to convert people who haven't ever liked a mascot racing game, and it will definitely please Mario Kart fans with its many tracks and options.

OK, let's say you're a big game company. You've got a mascot - he's absolutely huge with "the kids." You've made a nice little chunk of change off your little guy, but the kids are wising up to the fact that every game you've put out has only had minimal improvements over the previous one, and they aren't buying your little guy like they used to. You've got too much riding on him to stop now - action figures, shirts, and don't forget the talk of a cartoon that your licensing department keeps tossing around. You need a new hook... a new style of game to get the kids right back where you want them. But at the same time, you really don't actually want to have to think up a new concept for a game. So you do what so many developers have done before you - you toss your mascot, his arch nemesis, and a bunch of other characters from your games into go-karts. Then you start designing tracks filled with weapon power-ups. Before you know it, you're shipping yet another Mario Kart clone into the marketplace! Hey, big win, right? For most of the developers out there, the answer is no. Most of the Mario Kart clones that have come out thus far have either added unwelcome elements to the gameplay or have just plain sucked at ripping off the original console kart game. Naughty Dog, however, has managed to create a Mario Kart clone that does everything right. While it has a Diddy Kong Racing-like adventure element to it, as well as a bit of a storyline, it rarely aspires to be more than a great mascot racing game.

All the puppety oddballs in the world of Crash Bandicoot are preparing for the big race. They've all got their go-karts, and they're furiously tuning them up in hopes of victory. So, of course, that's a perfect time for an alien invasion. This alien is Nitrous Oxide, and he decides to up the stakes a bit. If he wins the race, he also wins the planet. So its up to you, as Crash, Polar, Cortex, or any one of the other racers to stop ol' N2O from winning. Much like battles in the video for Michael Jackson's "Beat It" were fought with the dance, the battles in this game are fought through the race.

Beyond the game's adventure mode, you can also go right to arcade mode and participate in one of four cup circuits. There's also a battle mode, which puts you in an arena full of weapons. The battle mode also has a team option, allowing for all sorts of different matchups. The versus mode lets two to four players race against each other on any of the game's tracks.The gameplay may be vintage Mario Kart (yes, it even has the little "hit the gas right before the race starts" speed boost), but the game's track design is top-notch. Be it a well-placed patch of ice in your path or a giant barrel that rolls back and forth across the road, interesting obstacles will get in your way in each level. Between that and the game's uncompromising first-place finish requirement, you'll have to take the time to learn the tracks before you can win. Sometimes, though, you'll need to rely on a well-placed missile or bomb to help you squeak into the lead at the last possible second. The AI is reasonably good. It starts out not knowing exactly how or when to use each weapon, but by the third world, you'll have a tough time keeping up if you can't handle your weaponry properly.

The Crash Bandicoot series has always had pretty smooth graphics, updating with the times quite nicely, and CTR is really no exception. The environments are reasonably large, and they convey the cartoon-like attitude of the game very nicely. The music and sound effects also push the game's cartoon theme, but it's not too over the top, so the cutesy themes never really get shoved down your throat.

Crash Team Racing may seem like just a Mario Kart clone. And, with the exception of an additional mode or two and the superior track design, it is. But it's a great Mario Kart clone, and it succeeds where the likes of Mega Man, Bomberman, Diddy Kong, the Chocobo, and even Mario himself have failed. CTR has the staying power to convert people who haven't ever liked a mascot racing game, and it will definitely please Mario Kart fans with its many tracks and options. 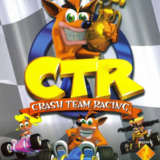