Crash of the Titans Review

It's a fairly sturdy, combat-heavy platformer with a good hook, but it lacks a real distinct attitude.

Ever since series creator Naughty Dog said goodbye to Crash Bandicoot on the original PlayStation, the series has floundered. While the reasons for the inconsistent quality are myriad, one of the key problems has been an inability to establish a tone that is consistent and compelling on the part of the short parade of developers who've tried their hand at the series. There's just no signature Crash Bandicoot feel anymore, which has made for a trail of indistinct, forgettable games. Now Radical Entertainment is at the helm for Crash of the Titans, and though it's a solid effort--arguably better than the past few Crash games--it still kind of feels like Yet Another Mascot Platformer.

Crash of the Titans doesn't overexert itself with its story, which is pretty boilerplate. After teaming up in 2004's Crash Twinsanity, Crash Bandicoot and his nemesis Dr. Neo Cortex are back at each other's throats at the beginning of Crash of the Titans. The game kicks off with Crash and friends relaxing at home, attempting to recycle butter, when the quaintly insane doctor shows up in a blimp to kidnap Coco and Aku-Aku. It's unclear how the kidnapping figures into his plan to take over the world with hulking, mutated monsters and seems like a force of habit more than anything else. Still, Radical manages to tuck some good humor into the proceedings, which, more often than not, is thanks to some strong readings from a cast of veteran voice actors.

A solid but predictable setup gives way to some solid but predictable platforming action. Although it's not as microscopically focused as the first three Crash games, the path you walk in Crash of the Titans is still pretty narrow. In terms of volume, there's not a great deal of actual platforming here nor is it terribly challenging, but a physics system that causes platforms to wobble precariously at least makes it interesting. There are also a number of hoverboard sequences wedged in there, which seem totally random both in terms of placement and length. There's certainly a greater focus on combat, and every level contains several sequences where you have to take out a large group of enemies before you can progress. As you defeat enemies and smash environmental objects, you'll pick up mojo orbs. These orbs can earn you ability upgrades and new moves, though the combat never gets more complicated than three- or four-button combos.

The big twist in Crash of the Titans comes from your ability to jack the giant freaks that Cortex has deployed against you. When you start wailing on one of these monstrosities, a star meter will appear over its head and begin to fill up as your attacks connect. Once full, you can hop onto the shoulders of the monster and ride it around, like some kind of fleshy tank. You'll find that there's a good variety to these monsters because they have wildly different suites of attacks, as well as their own sets of strengths and weaknesses. Certain monsters are impossible for Crash to successfully attack on his own, requiring you to jack another monster first. Having to daisy-chain a series of monster-jacks during boss fights represents some of the most satisfying action in Crash of the Titans.

The game does a pretty good job of introducing new monsters at regular intervals to keep you guessing, but once you've figured out the basic tactics necessary to jack all the different enemy types, it loses a lot of its steam. Crash of the Titans tries to compensate later on with larger numbers of enemies, though this can lead to frustrating moments where you're being pummeled from all sides and unable to defend yourself or retaliate. It should take about six or seven hours to play through Crash of the Titans on the default difficulty level. The game naturally tries to lure you back with hidden items and secondary goals that can earn you some unlockable extras, as well as a cooperative mode. But you'll probably have had your fill of double-jumping, hoverboarding, and monster-jacking by the time you reach the end the first time through.

Crash of the Titans offers pretty much the same experience on the Xbox 360, Wii, and PlayStation 2. The Xbox 360 version is naturally the best-looking, with the cleanest textures, as well as the nicest lighting and particle effects. However, the motion-blur effects can get a little carried away on Crash, which have the odd effect of making him look prerendered, like he was in a Donkey Kong Country game. The Wii and PlayStation 2 versions are pretty comparable from a presentation perspective. However, the Wii version's particle effects look nicer, and it also looks better on an HDTV. Crash of the Titans shows some restraint when it comes to the Wii motion controls, which the game only really uses for performing some of the monsters' special attacks.

Radical has created a reasonably fun experience here that's frothy, intermittently funny, and a breeze to play. The big underlying problem with Crash of the Titans is that you could swap Crash out for any number of other cartoony platforming heroes and not really know the difference. Without much of a distinct style to call its own, it's hard to get too excited. 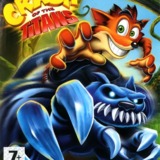