Crash Nitro Kart is the best option to come along in a long while, and it's a totally respectable kart-racing game on its own, regardless of how derivative it may be.

If any kart-racing game has managed to rival the quality of the famed Mario Kart franchise, it would be Naughty Dog's Crash Team Racing for the PlayStation. Though it did little to change the kart-racing formula defined by Super Mario Kart, it set itself apart from other Mario Kart clones with some unique modes, excellent track designs, and solid, responsive gameplay. Now, Crash Bandicoot, the PlayStation's former quasi-mascot, gets back into the kart-racing business with Crash Nitro Kart, though this time he's hitting all the major consoles. Though the developer and publisher of Crash Nitro Kart are different from those responsible for Crash Team Racing, CNK plays more like a juiced-up remake of CTR than an out-and-out sequel. This may be a touch disappointing to hardcore fans of CTR, but anyone looking for a solid kart racer should be quite pleased.

Though video game mascots have rarely needed much reason to get involved in a kart race, Crash Nitro Kart tosses in a story concerning an evil intergalactic overlord and his evil intergalactic kart-racing competition. Beyond this, CNK offers straightforward kart racing, and lots of it. You can play as virtually any character within the Crash Bandicoot canon, including Coco, Crunch, Dr. Neo Cortex, N. Gin, and Tiny, as well as a few new additions to the roster found in Crash Team Racing. Each racer handles a little differently, though they're all fairly well-balanced.

CNK tweaks the kart-racing formula in a few small, specific ways, lending the game a slightly original flavor. You'll notice a rising power gauge linked to your acceleration at the start of the race, and if you can hit the gas at just the right time before the light goes green, you'll be rewarded with a nice little boost right off the bat. You can also get extra boost by landing big jumps, running over boost pads, or grabbing a nitro canister out of one of the many crates that are scattered across the tracks. To earn big boost, you'll need to master the powerslide mechanic, which lets you come out of a powerslide with jets blazing. It can give you a serious advantage in the race, but the powerslide boost is also very difficult to pull off, requiring flawless timing. In races where you're karting alongside team members, a team power-up is available. Your team meter is filled by keeping close to your teammate, and once you top out, you can trigger the power-up, which will give you instant access to random power-ups for a limited amount of time. The power-ups you'll get from the team power-up can also be found in the crates on the track, and they are largely the same types of offensive and defensive power-ups found in Crash Team Racing. For the most part, CNK is good, clean, kart-racing fun, though like its predecessor, it has a habit of granting power-up preference to players who are lagging behind, which can be great if you're in last place but frustrating if you've maintained first place the whole race, only to be passed up at the last second.

Track design was one of the biggest strengths of CTR, and Vicarious Visions, the team responsible for Crash Nitro Kart, seems keenly aware of this. So aware, in fact, that it has cribbed lots of basic track designs and some specific track elements--and, in some cases, almost the entire track--from Crash Team Racing. Of the few new elements that CNK introduces, sections of track where your kart actually transforms and levitates above the surface are the most prominent, and this allows the track to go vertical, and even inverted in some cases. This sort of disregard for gravity has been a staple of futuristic racers for years, and it's an interesting idea to implement in a kart racer, but the implementation is clunky, and in most cases it feels as though it were shoehorned into an existing track design, rather than realized as an integral part of the track design. Other than these awkward sections, Crash Nitro Kart generally displays some solid, inventive track designs, with a later track that involves a series of leaps into giant warp gates being one of the more unique.

The single-player adventure mode in Crash Nitro Kart is predictably brief, and it basically serves as a diversion if you don't have a group of friends around to play with. As with most kart racers, multiplayer is the crux of Crash Nitro Kart, and the game includes plenty of gameplay options to keep you and your friends entertained. Up to four players can get involved in a one-off race; a team race, where the team power-up is in effect; or a cup race, which is basically just a series of single races rolled up into a big competition. If you don't particularly cotton to lap-based races, there are a few battle modes to choose from as well. Limit battle and last kart driving both pit players against each other, armed only with the power-ups they grab out of crates--the key difference between the modes is that limit battle has a time limit and last kart driving has a life limit. Crystal grab charges you with gathering up more crystals scattered across the track than your opponent. Finally, there's the self-explanatory capture-the-flag mode, as well as the steal-the-bacon mode, which is basically just CTF, but with only a single flag between the two teams. The variety of gameplay offered by the different race and battle modes gives Crash Nitro Kart some decent legs, especially in a multiplayer setting.

Crash Nitro Kart maintains the brightly colored, cartoony look that has been the hallmark of past Crash Bandicoot games, though with slightly upgraded graphics. The characters look a bit more polished than their PlayStation counterparts, though the choppiness of their movement suggests that their animations were lifted straight out of Crash Team Racing. The tracks have a chunky, exaggerated look, which seems like more of an artistic choice than a technical one. The game happily throws down good-looking particle effects and reflections without wreaking havoc on the frame rate, which is pretty consistent across all three platforms, and there isn't much evident disparity in visual quality between the different versions. The sound is respectable, featuring lots of madcap cartoon music and wacky sound bites from the drivers, the former of which remains acceptable for longer than the latter, simply because some of the "attitude" in the sound bites seems forced. 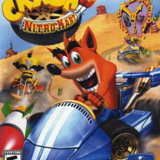 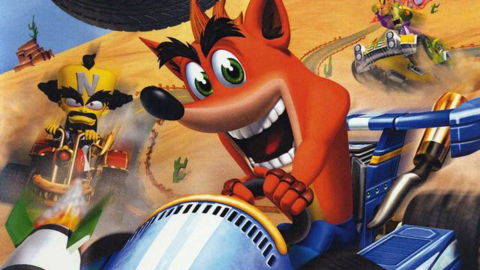 Crash Nitro Kart is the best option to come along in a long while, and it's a totally respectable kart-racing game on its own, regardless of how derivative it may be.