Crackdown 2 boasts enough exploration-fueled action to entertain despite its many flaws.

Pacific City is under siege. Terrorized nightly by a legion of mutated monsters and daily by the rebellious Cell insurgents, this metropolis needs your help. As a superpowered law enforcement agent, you traverse the city with great leaps and subdue your enemies by any means necessary. Your abilities increase as you explore and complete objectives, bringing you new powers, guns, and vehicles. Sound familiar? If you played its predecessor, then you have a good idea of what's in store for you in Crackdown 2. This sequel retains the appeal of Crackdown while adding a few twists that help make things feel different. Yet none of these additions are terribly innovative, and there are plenty of issues with which to contend. The scant plot leaves the campaign devoid of momentum, and as you spend most of the game accomplishing the same handful of repetitive objectives, Crackdown 2's problems become more and more noticeable. Though almost every kind of fun you can have in this game is tainted by flaws, the fun of running amok as a supercop remains remarkably addictive, making Crackdown 2 an entertaining open-world romp.

Geographically speaking, this is the same Pacific City that players explored in the first Crackdown. It is still quite large and full of places to go, but time has not been kind to it. Buildings are crumbling, roadways are disrupted, and it generally feels like a more conflict-torn environment. The visuals are improved, and once again the cel-shaded outlines mix well with more realistic textures, creating a distinctive look. Yet Crackdown 2 looks grittier than its predecessor, and while the environments are richer and more complex, the effect isn't always good. Environmental details don't stand up well to close inspection, and explosions, of which there are many, don't look very good at all. Still, it is fun to explore the city and blow stuff up, and the absence of loading times makes doing both easy.

Exploration is one of the most entertaining parts of Crackdown 2, thanks largely to the liberal placements of attribute-boosting orbs throughout the city. Green agility orbs perch on rooftops, encouraging you to climb to new heights, while white hidden orbs reward curious and thorough explorers. Most orbs are stationary, but two new types of orbs flee from you, baiting you to give chase on foot or in a car. Every orb glows brightly, and once you've spotted one, it's very difficult to resist grabbing it. Collecting orbs is immensely satisfying, and there are hundreds of them scattered around the city. Whether you're leaping impossibly high or zooming around at unsafe speeds, it's easy to get caught up in an addictive orb-snatching binge.

The unpleasant reality of these binges is that, while leaping high into the air is exhilarating, climbing structures can be aggravating. The visuals can make it tough to tell what parts of a building you can grab on to and what parts you can't. After a while, you develop a good eye for the environment, but there is still the looming problem of Crackdown 2's inconsistent ledge detection. You will often jump at the side of a building to grab what you know to be a ledge, only to fall impotently to the ground many stories below. Or you'll climb a series of windows but inexplicably fail to grab the exact same kind of ledge from which you just jumped up. Sometimes your leaping skills allow you to regain your position easily, but the higher you climb, the more time and effort you stand to lose as a result of this flaw. This makes climbing tall buildings nerve-wracking; not just because it's tricky, but also because at any moment, you could fall victim to Crackdown 2's inconsistency and plummet to the earth.

Though it is aggravating, this problem isn't bad enough to ruin the appeal of exploration and orb collection, and there's a lot of fun to be had in just roaming around. The other collectibles to be found in Pacific City are audio logs. They come in a number of varieties and shed light on your enemy's agenda and other threats to public safety. These voiced snippets are the only substantial form of plot development in Crackdown 2, but they are few and far between. There is some mild plot intrigue, but unless you scour the city, the opening and closing cutscenes are pretty much all the plot you're going to get. Instead, you get a disembodied narrator who accompanies you wherever you go, who is initially helpful and somewhat amusing. But after a while, he starts to repeat himself and say things that aren't necessarily related to what you are doing. Then he becomes annoying and obtrusive, driving you to turn his voice off. Yet if you do shut him off, you'll also shut out the audio log voice-overs, which are actually worth a listen. You could manually switch the option every time you come across an audio log, but that's an inelegant solution to a bothersome issue.

Fortunately, there are plenty of bad guys to help you vent your frustration. The enemies arrayed against you come in two varieties. Your human enemies, the Cell, are dedicated to fighting you and your agency; your zombielike enemies, the Freaks, viciously slaughter anyone they see. At the outset of the game, you are told about both factions, assigned a few different combat-based objective types, and set loose in the city. Fighting men and monsters can be enjoyable while increasing your available arsenal and melee strength is rewarding. The deadly sticking power of the harpoon gun and the Jedi-like area effect of the UV shotgun are highlights, and the weapons you find in the environment can be just as fun. Bashing enemies with lampposts, bus stations, and park benches is an enjoyable way to flex your power, and throwing vehicles is an evergreen source of amusement.

At the same time, combat in Crackdown 2 is pretty simplistic. In the early going, you can shoot and punch your way through enemies fairly easily. And when the going gets tough, the tough jump around with a rocket launcher and duck behind buildings to regenerate health. Laying waste to lots of enemies is still inherently satisfying, as long as you don't get caught by knockdown attacks or explosions. Both cause you to rag doll and roll around limply for an annoying amount of time, leaving you powerless to defend yourself against repeated attacks. Ultimately, the problem with combat is that it is centered around repetitive objectives. You can only clear out so many Cell strongholds and Freak lairs before they begin to feel the same.

You can mix things up by driving around the city in any car you choose or by summoning an agency car at a drop point. The agency cars handle the best and have special abilities, making them the most fun, though other cars have radios installed so you can hear actual music while you drive. The cracked pavement can give you some trouble, but races, stunt rings, and renegade orbs provide good incentive to get behind the wheel. These objectives not only encourage you to broaden your exploration, they take you places that you wouldn't otherwise travel on foot. Just be ready for some trouble if you drive during the day. Pacific City's civilians think nothing of gathering en masse and wandering into the street in an effort to become roadkill and especially love to congregate on broad street corners. It's very difficult not to massacre civilians while driving, and violent police retaliation against you is the annoying result. Of course, police intervention is just another excuse to indulge in some superpowered mayhem, which is one of the chief pleasures the game offers.

The Crackdown 2 campaign can be played cooperatively over Xbox Live, letting up to four players romp around one city at a time. If you join a game, you can keep any orbs you grab or attributes you improve, though only the host keeps campaign-related progress. There are some bonus orbs that can only be collected with at least two players present, and there's more than enough opportunity for cooperative (or not so cooperative) fun to make teaming up worthwhile. Playing chicken in stolen trucks, punching your buddy off of a rooftop, or having a corpse-throwing contest are just some of the amusing activities you can improvise in this open world. The competitive multiplayer is not nearly as amusing, offering a paltry three modes that cover the basics (shoot each other, shoot the guy carrying the thing) but don't offer a particularly enjoyable or deep experience.

What Crackdown 2 does offer is a whole bunch of room to have fun. Exploring the vast city, grabbing orbs, pulling off stunts, and flexing your abilities can keep you entertained for hours, and it's even more enjoyable when you have some friends along to add their own sparks of diversion. The lack of a narrative makes the campaign feel directionless and repetitive, and the different flavors of action are all tainted in one way or another. This game doesn't significantly build on or vastly improve any of the features of its predecessor, so those with high hopes for a stellar sequel will be disappointed. Still, Crackdown 2's core action and appeal remain very strong, and there is great potential for cooperative mayhem, making this a fun stop on your summer videogame tour. 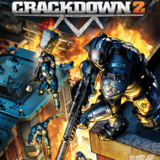