The game is flawed on so many levels that only the most dedicated survival-horror fan might get some enjoyment out of it.

In recent months, we've seen some new entries in the ever-widening survival-horror genre, such as Jaleco's Vampire Hunter D, Asmik-Ace's The Ring, and, to some extent, Activision's Covert Ops: Nuclear Dawn. These games owe quite a bit to the Resident Evil series, or as some will argue, the Alone in the Dark line, and Countdown Vampires is no exception. While most of these games at least attempted to bring something new to the genre, or went to significant lengths to create an interesting storyline, Countdown Vampires does not. The game is flawed on so many levels that only the most dedicated survival-horror fan might get some enjoyment out of it.

In the game, you play the role of Keith J. Snyder, a policeman hired to provide security for a new horror-themed casino. The game opens with a very nice CG sequence - a fire starts and mayhem ensues. Soon enough, the sprinklers engage, spewing black water on the party guests and turning them into vampires. From here, your quest to discover the origins of the mysterious black water begins. Playing the role of a good security guard, you must shoot the humans-turned-vampires with an anesthetic gun and sprinkle them with white water to turn them back to normal. Later in the game you will encounter grotesque monsters that must be killed, and a gun that merely puts enemies to sleep will not be enough to ensure your survival.

For the remainder of the adventure, the game employs some tried-and-true features of survival-horror games, like droves of enemies, keys to hunt, and cryptic puzzles to solve so you can find needed items. Countdown Vampires takes these features more than a single step further by cloning Resident Evil in almost every aspect imaginable. In theory, Vampires could have been an above-average entry to the survival-horror market, but it ultimately fails.

First and foremost, the game is haunted by some particularly bad camera angles and confusing level design. Many times, a room has several exits, so getting to the next room can be a chore, and as the camera changes from room to room, you can easily become lost. While it was a valiant attempt to provide some much needed depth to the traditional prerendered backgrounds of this type of game, in practice, the only purpose it serves is to confuse the person playing the game.

In a genre that thrives on interesting storylines, this game more or less seems to have taken just about every overused notion of plot, changed a few minor details, and spit it back at you. What could have been an intriguing plot ends up feeling rushed and does little to keep you interested. To add insult to injury, you'll also find laughable voice acting in this game. Devoid of any type of emotion whatsoever, the flatly delivered lines do not aid in carrying the story along at all. Additionally, a good deal of the onscreen text is poorly translated; while only a minor detail, it's rather annoying.

Visually, the game has its strengths and weaknesses. The CG movies are well directed and worth watching, provided you don't pay any mind to the voice acting. On the gameplay side, you can expect mediocre visuals, from the backgrounds to the characters themselves. In an attempt to give the game a gothic feel, most of scenes in the game look overly muddy, dark, and bland. Keith and his adversaries in the game do not have a large amount of detail and have even fewer animations. The graphics look poor, and the limited number of animations means the featureless characters move in an overly repetitive fashion. For example, when Keith descends stairs while walking toward the camera, he appears to hop down, rather than take one step at a time. The CG movies may be great, but they only account for a small fraction of the actual game. In short, Countdown Vampires is not a pretty game to look at.

As in most games of this ilk, sound is used sparsely - mostly for atmospheric and suspense effects - and plays a minor role in the game. But it plays its role well, if only to let you know that a vampire is lurking around the corner or that you've entered a room you'll be safe in.

While the game has many flaws, one merit is the addition of having to gamble for money. The game is set in a casino, after all, so the idea works well. After spending your cash at a slot machine or roulette table, you can purchase some needed items to revive your health, or you can purchase a map. This feature is a welcome change from the typical confines of shooting enemies and hunting for keys, but it's only a diversion from the bulk of the game.

On the whole, Countdown Vampires tried hard to bring innovation to the survival-horror genre. In execution, the game ends up playing like many of its brethren. But without a compelling story to keep your interest, most of you will not want to play through to find out what happens at the end of the game. A fan of this style of game may want to wade through the scattered gameplay and monotone voice acting, but those unfamiliar with the genre would be better off with something else. 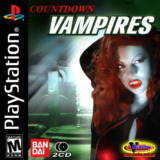