There's a particular milestone of growing up that goes relatively unexamined as far as shared experiences go, and that is the moment you realize your parents had deep inner lives of their own before you were born. That's true for Cosmic Top Secret's writer/director/protagonist Trine Laier, whose parents are hiding one of the coolest secrets imaginable, and yet that palpable sense of a once-impenetrable boundary having been crossed between them is still huge. Cosmic Top Secret trying to translate those feelings into a video game makes it remarkable. Ironically, what stops it from being brilliant is that it's not very good at being an engaging video game.

The game's title refers to an actual security designation within the Danish equivalent of the Department of Defense, which, unbeknownst to Trine until her late 30s, was the security level both her parents held while working there on a classified spy project during the most tense years of the Cold War. Determined to get the full details, Trine ropes both her parents into doing interviews for a documentary on their lives. The project runs into major snags since neither of her parents know if their work is declassified, even after Trine actually gives the Department of Defense a call and has a high-ranking official essentially debrief them on what's safe.

Cosmic Top Secret is a series of five relatively self-contained open worlds, all relating to a specific point in Trine's time trying to squeeze what she can from her parents. It all takes place in a papercraft, pop-up-book representation of her journey; imagine the living papier-mache world of Media Molecule's Tearaway, except crafted by 50 years of shredded classified documents, and you have an idea of what Cosmic Top Secret feels like.

From marching alongside her mother at a military base to going orienteering--a sort of free-form competitive hike--with her father in a local forest, everything takes on a sort of twisted, mesmerizing magic. That abstract interpretation includes the paper doll avatars of Trine, her parents, and all their former colleagues, rendered as googly-eyed exaggerations that shift, change, break, and rip along with whatever their current mental and physical status is. While in real life Trine's father injured his shoulder while orienteering, his paper doll self in-game gets its arm torn off, and you have to find it. Trine being reminded of a specific family tragedy might cause her doll version to fall apart entirely, meaning you have to put her back together again to finish the conversation. It's a sort of emotional sleight-of-hand that could only have been executed in games, trying to inhabit a documentarian's feelings and internal dialogue. It's a magic trick not every game--even the ones specifically aiming to evoke emotions from the player--pull off as successfully as Cosmic Top Secret does.

All the while, Trine herself must explore each environment, sifting through the chaos of years of espionage history for the clues to lead her closer to the truth. The process had to take months of looking through filing cabinets in real life, but the game portrays it as a huge collect-a-thon of Trine running around the open world. Everything is clearly marked on the map, which is conveniently laid out like an alphanumeric grid, and there's no puzzle so difficult that it'd require consulting a wiki. There's just so much of it, and it's not until you pick something up that you know whether the item will actually unlock the next snippet of story or not. Thankfully, every single item in the game unlocks a piece of obscure history (like the secret operation to steal a sample of former Russian president Nikita Khrushchev's feces), a fascinating anecdote (a man imprisoned for years for taking the wrong pictures in Poland), or a video clip of the real-life interviews Trine conducted with her parents.

Had Cosmic Top Secret been a documentary, this is the kind of meticulous detail she'd have to leave on the cutting room floor. As sheer experience in the realm of gaming, it's all contextual gold, giving you an extensive picture of not just Trine's parents as people but the world they operated in--even as they try to keep Trine at arm's length from it.

The caginess has a universal feel to it. Many parents talk to their kids as kids for so long, transitioning to talking to them like adults can be difficult. Trine's parents are so used to talking around their work in the name of national security, they actually don't even remember how to talk about it. Much of the actual story structure of the game is about Trine finding her parents at just the right moment or coming at a question at just the right angle to get them to open up. What they reveal isn't necessarily the stuff they make award-winning cable shows about--no, they didn't assassinate anybody or anything like that--but it does tell quite a bit about the kinds of people her parents were, how that knowledge relates to her and how that changes how she sees her parents.

In trying to relate to her parents lives as agents of the state, Trine has to come to grips with the fact that her parents were not just her parents and not just spies, but grown adults with their own regrets and secrets and feelings. Many of them come from when they were younger than Trine was when she made the game. She speaks to former colleagues who had never met her but knew her parents as friends or by reputation, maybe the first times Trine hears her parents spoken of in such a way.

One of the big revelations that stops the investigation in its tracks a moment is Trine's mother remembers her first husband, who died young, and whose best friend became her second husband and, eventually, Trine's father. By her admission, Trine doesn't think about it much because it breaks her heart, but her mother tosses the matter out as mere trivia, a fact of life she's long come to terms with. The game is full of these tiny moments of reckoning for Trine, and these are the times when the game transcends being a simple mystery into a story of poignance. In a documentary, those thoughts and feelings would be essentially carried by narration, dialogue and candid moments surreptitiously caught by an intrepid cameraperson. Cosmic Top Secret, however, is less about saying how Trine feels--or even about showing it--and more about thoroughly immersing the player in a vast, interpretive world of her feelings about it.

Cosmic Top Secret's very existence and ethos makes it special in the realm of gaming.

The trouble comes while navigating through Trine's feelings on everything, and unfortunately, that's not a metaphor. You move in Cosmic Top Secret by moving your mouse over Trine, which crumples her up into a tiny ball of trash you can roll around a stage. It's extremely easy to lose control and send the ball flying off into corners, and you're unable to reel the ball back and stop, turn on a dime, or even just roll straight--which you need to do far too often and far too precisely to be enjoyable. Later, one of the middle stages has Trine turning into a paper airplane that has the reverse problem, where the controls barely respond to the degree you need to land on the very small platforms you're guided to. Combine those problems with a finicky camera that actively limits your rotation until Trine turns around, and for large chunks of the game, you're stalled not because you're reading about fascinating history but because you're trying to wrestle the game's controls into submission. There's this concept that a game that's primarily about exploration needs some sort of challenging gameplay element to be considered a "real game," and seeing Cosmic Top Secret trip over its own feet for the sake of adding that extra challenge should put that argument to bed once and for all.

Cosmic Top Secret's very existence and ethos makes it special in the realm of gaming. It's conceptually brilliant and heartwarming. Arguably, it's still worth fighting the game's mechanics just because Trine--and you, by proxy--deserves to know the truth and hear every angle of these peoples' captivating story firsthand. Trine started her journey with curiosity and finds herself closer to the people who raised her than ever, while also giving them the ultimate familial gift: a literal living history of their youth, and their work for the greater good, through the fantastical, imaginative eye of their clearly talented, inquisitive daughter. But there's a barrier to entry here, and it has nothing to do with the embarrassment of asking a parent what they were like when they were younger or their hesitation with the truth, and everything to do with the aggravation of even exploring the world in which their story is told. 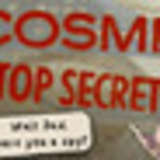 Justin Clark played through Cosmic Top Secret in about five hours. He is obsessed with the idea of pasting googly eyes on everything (and that was before he played this). A review code was provided by the publisher.