Cosmic Star Heroine makes a great first impression. Its introductory hours are all synths and saxes, flashy sci-fi espionage, and daring escapades lit by suffusions of neon and moonlight. There's no mistaking it for some imported decades-old classic, but it still managed to give me flashbacks of loading up untranslated PC Engine games and gawking at the interstitial artwork.

Agent Alyssa L'Salle is a beret-wearing, bo-wielding covert ops specialist for the government who spends much of the game unraveling a large-scale conspiracy. Within minutes of being introduced, she's defusing bombs, hacking computers, and getting into harrowing fights with flying drones while clambering up the side of a skyscraper. She's almost cartoonishly cool and competent, as are her companions. It may seem a little over the top at first glance, but it's part of what cements the game's vibe as a pulpy, joyously unfettered throwback. Pop stars, tech experts, monk-like gunslingers, and literal dancing machines--Cosmic Star Heroine is far from shy about letting its cast shine every bit as brightly as its lead.

Added to this are Style and Hyper Points. Style accumulates over time and offers a boost to allies and enemies alike, so the longer a battle takes, the more devastating each strike becomes. Hyper Points, meanwhile, are accumulated with each turn and are represented as little pips under a character's health bar. Fill in the requisite number of pips and the character unlocks the damage-doubling Hyper Mode for their turn.

That's a lot to take in at first, but the end result is that combat has an extra layer of strategy beyond what you might initially expect. If an enemy is weak to water, for instance, there's a massive advantage to saving one of Alyssa's water abilities until she's in Hyper Mode to get the most out of it, especially if a few turns have already passed and she's had a chance to accumulate some Style as well.

In general, this system encourages good habits and thoughtful fighting. This is especially true in Hyper Mode, which encourages you to be a lot more diligent about considering your entire repertoire of moves and making big, flashy strikes really count. At lower difficulty levels, these mechanics have little chance to shine, but since the difficulty can be adjusted at any point in the game, it's easy to experiment and find the exact level of challenge that suits your play style.

No matter what difficulty is selected, Cosmic Star Heroine clearly doesn't want to be a grind. Alyssa moves from dystopian city to alien planet to swanky mob banquet with plenty of fighting in between--but plenty of direction and purpose, too. The handful of alternate paths, hidden areas, and optional bosses seldom take her too far from the action or distract too much from the core objective, and they typically yield high-quality gear for her or her companions.

As a result, you never feel like you're dragging your heels in any one location for long--but it also makes the individual events feel oddly abbreviated at times. Plots sometimes pivot and settings shift before you get a good sense of either. If the game dealt purely in tropes, this wouldn't matter, but Cosmic Star Heroine presents its own individual world, its own uniquely interesting characters, and its own blend of technology and the supernatural--and then provides you with almost no space to acclimate to any of it. Fast-paced action and intrigue can and should still allow for moments of downtime, flavor, or world-building. Even within the confines of short scenes, moments that could use a little time to breathe are awkwardly clipped. Hacking is instantaneous, as is subway transportation. These just happen, immediately and without fanfare--at its worst, it can feel like watching a movie at 1.5 times the normal speed.

This is true even when it comes to the writing, which usually strikes a decent balance with its cheesiness. But every now and then Cosmic Star Heroine offers up a joke dampened by its own preemptive flop sweat. The style of its tone-setting minimalistic animated cutscenes is another case of the usually great being undermined by the occasionally awkward. Three-dimensional rendered models of ships and structures are sometimes slipped in alongside the hand-drawn elements, which has the effect of cheapening and fracturing an otherwise cohesive visual style.

You will also find that Cosmic Star Heroine is peppered with slightly pettier annoyances as well. The biggest of these is the fact that there's no option to load the game from the system menu, so any time you want to test a different strategy or replay a section on a different difficulty setting, you have to close and restart the game. And strangely, some boss fights instantly resolve themselves under certain difficulty settings, but not always. Sometimes, one or two of the enemies would simply flee and reduce the opposing team's numbers, and sometimes a boss would simply concede before even a single turn passed.

The dialogue trigger also seems to be incredibly sensitive, so even if you take extra care to press the button as lightly as possible, you may end up trapped in a loop of the same few lines from an NPC, unintentionally triggering the same text three or four times before breaking loose--an unfortunate and regular occurrence.

With all of that said, Cosmic Star Heroine is still an enjoyable sci-fi RPG with a classical spirit. It's shameless in its celebration of its inspirations, and the soundtrack goes a long way to sell every moment. Though it has more than its fair share of flaws, none of that stops this game from being exactly what it sets out to be.

View Comments (47)
Back To Top
6
Fair
About GameSpot Reviews 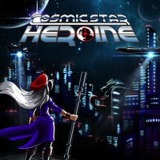 Janine Hawkins has never said no to a good, old-fashioned space adventure, though she's spent a few too many hours with middling early-'90s anime role-playing games to be swayed by nostalgia alone. GameSpot was provided with a complimentary copy of the game for the purpose of this review.