Corpse Party: Book of Shadows is light on gameplay but heavy on horror.

Corpse Party: Book of Shadows is a horror game through and through, but it's in no hurry to prove it. By the time 40 minutes pass, it plays more like an innocent tale of two Japanese schoolgirls coming to terms with the sexual attraction one feels for the other, and its only nods to traditional gameplay in all that time are the clicks of the X button you press to nudge the dialogue along. It eventually settles into the gory parts, but not without enough backstory to fill over a third of the running time of John Carpenter's Halloween. Indeed, if 2011's Corpse Party flirted with the concept of interactive novels, Book of Shadows marries it. It's a different approach than that taken by the original game, but it suits Book of Shadows well.

In a perfect scenario, you will have played the original. Book of Shadows gives only cursory attention to key events such as the ritual that whisks several students and a teacher off to the abandoned Heavenly Host Elementary School in a parallel dimension, making the task of getting your bearings amid the disjointed narrative a chore for newcomers. More of a spin-off than a sequel, it handles time with all the irreverence of a Quentin Tarantino flick, flipping forward and backward chronologically and fleshing out events you missed the first time around in each of the seven core chapters. Deja vu also plays a considerable role (particularly since Book of Shadows launches on the heels of the original's sixth "bad" ending, in which the protagonists are sent back in time with little to no memory of past horrors), and thus players who experienced the 2011 release will have an easier time avoiding the mistakes of the past.

And yet those mistakes are part of the fun, such as it is. Once you venture into the "game" portion of Book of Shadows, you occasionally find yourself faced with at least two choices, and choosing the wrong one usually ends with the death of the character you're controlling at the time. They're most intense when they're timed. But these aren't simple "Game Over" affairs; in most cases, they unlock additional details. They're also gruesome. In one of the tamer bad endings, failing to avoid a ghost results in his bending your back backward until it snaps with "a sound like the cracking of a huge lobster tail."

It doesn't stop there; not long after, other ghosts dismember the terrified schoolgirl you control until she bleeds to death. Scenes like these, delivered in darkness with the narrator's descriptions filling the text bar at the bottom of the screen, manage to frighten more than the graphic depictions thanks to the exemplary binaural audio experience that could foster nightmares with headphones. The ability to save at any time also makes sampling every bad ending more palatable than before; in Corpse Party, failure usually meant wading through much of a character's story again before reaching the relevant scene.

It's a credit to the quality of the narrative that all the blood and guts rarely feel like cheap snuff fodder. This is horror with heart, and all the attention given to the two schoolgirls mentioned above, for example, culminates in a genuine rush of pathos once tragedy inevitably catches up with them. This recurring sense of humanity separates Book of Shadows' narrative from that of its predecessor, in which some characters met their grisly, graphic ends with only slight nods given to characterization. Elsewhere, unanswered questions receive answers, such as how Tohko Kirisaki wound up with a black eye and a missing tooth. The game delivers around 15 to 20 hours' worth of story for those willing to sit through all the true endings and the bad endings, along with the opportunity to unlock a creepy eighth chapter leading up to the next installment in the series. (If you have a finished save from the first Corpse Party, you can access this chapter without completing all the endings.)

The original Corpse Party featured 16-bit sprites that fled from murderous foes in a top-down style reminiscent of Legend of Zelda: A Link to the Past; Book of Shadows, by contrast, only uses the sprites to navigate through individual rooms on a pop-up map. Here, everything else is in first person. Beyond the many cutscenes, Book of Shadows' gameplay focuses on maneuvering a reticle with the thumbsticks over objects of interest on painted images of rooms, occasionally uncovering useful items to further the story but more often triggering flavor text with spooky warnings or the name badges of the corpses lying about Heavenly Host. It works for the rooms, but it fails in the many hallways that must be searched image by image. Aside from gaps in the floor left over from earthquakes that affect accessibility for particular storylines (the general layout always remains the same), each hallway image looks similar to the last, making the need to search around for a useful item or plot device a dreary, same-y chore.

Worse yet, plot developments can't be accessed without these searches, chiefly due to the inclusion of a "darkening" meter that rises as the protagonist encounters terrifying or mysterious sights. It's a smart concept that's never really explained, so if you're not paying attention when you open the sparse menu, it may take hours before you realize that it's the culprit responsible for the bloody haze and the ultimate loss of all freedom of choice that results in your death. Balancing it thus becomes one of Book of Shadow's few real gameplay challenges, particularly since it's rarely clear how much an action will fill it. Beyond that, Book of Shadows rewards dedicated players with the bonus features that allow you to play its many haunting music tracks at will, along with art and testimonies from each chapter and interviews with the voice actors.

Despite its sometimes tedious gameplay, Corpse Party: Book of Shadows is a rare horror game that manages to deliver on its intention to frighten you. Again, the 3D audio work excels with headphones, and several whispers work so effectively that you may find yourself looking over your shoulder if you're playing in the dark in an empty room. The lack of English dubbing seems disappointing at first, but the Japanese voice cast delivers such a memorable performance that it manages to stir emotions through the sound of the voices alone. Stick with Book of Shadows, and you'll find that it's worth every sleepless night you suffer from following the tale of Heavenly Host Elementary to its terrible end. 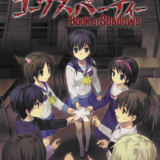 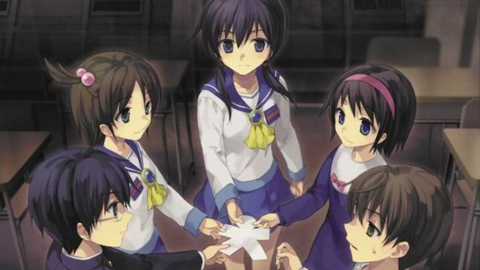 Corpse Party: Book of Shadows is a gory, disturbing and uncomfortably exhilarating tale of mystery, fear and survival.

7.7
Sign In to rate Corpse Party: Book of Shadows