Contrast is a game concerned with intangible ideas: the substance of a shadow, and the makeup of a child's broken heart. As a mysterious figure named Dawn, you aid a young girl named Didi in her efforts to prevent her family from falling apart. You don't exist fully in Didi's reality; rather, she is the only person you can see and who can see you. Everyone else appears as a mere shadow projected on the wall, and you yourself have the ability to shift between a corporeal, three-dimensional existence and a silhouetted, two-dimensional one. Contrast conjures up a captivating and surreal mid-20th century European atmosphere of jazz clubs and cabaret singers, and its use of shadows is sometimes striking. But Contrast's puzzles and platforming rarely call for you to do more than go through the motions, and far too often, the roughness of its physics shatters the elegant ambiance of its world.

Didi's parents are on the rocks, and as you follow the intrepid Didi through town on her quest to keep her family together, the story of their troubled romance plays out in shadow vignettes. Noir-flavored dialogue gives the interactions of the troubled lovers a smoky edge; when Kat tells Johnny that he's "a carousel of broken dreams," you might feel like you're in the midst of an intoxicating, Casablanca-esque love story. And indeed, the game makes a few explicit references to that classic film.

But these enticing glimpses of a rocky relationship between two strong-willed people aren't just for show. As the characters' large shadows play out their parts in these scenes, you can shift into a shadow yourself, leaping on their outstretched arms or their shoulders and using their movements to help you reach places you otherwise couldn't. You can leap onto just about any shadow on any wall, and a few basic puzzles require you to manipulate light sources so that objects cast shadows that you can use to your advantage. And in one elaborate and especially enjoyable sequence, you fill in for a princess puppet in a story about a brave, knight-rescuing princess that Didi's father cooks up to entertain his daughter. The imagery and dialogue of these shadow vignettes make Contrast a distinctive and intermittently seductive experience.

As you progress through the game, you earn a few new abilities that you must put to use to advance, including a dash move that lets you pass through thin shadows, and the ability to pick up boxes or spheres and shift them into shadow form. This latter ability factors into the occasional puzzle that offers a satisfying "aha!" moment as the pieces fall into place and you realize what you need to do to get the box to its destination.

But for the most part, what you need to do is plain as day, and once the pleasure of being in Contrast’s world has worn off, the act of carrying boxes around and pushing switches to make machinery do its thing becomes routine. The ability to shift objects in and out of shadow form also leads to frustration, because it's extremely common for Dawn to become stuck in the environment when snapping out of shadow form with an item in hand. You can usually get Dawn unstuck by leaping or dashing or just wobbling around for a bit, but the prevalence of this problem pulls you out of the mood Contrast's atmosphere and story strive to foster.

There are collectibles throughout Contrast that shed a bit of light on the narrative, but the ultimate explanation of Dawn's existence is cursory and unrewarding. And despite a few strong moments, the game more often flounders in its efforts to mix substance and shadow into an enjoyable cocktail. The alchemy of Contrast doesn't quite pay off, and in the end, the game feels as insubstantial as the shadows that populate its world.

View Comments (100)
Back To Top
5
Mediocre
About GameSpot Reviews 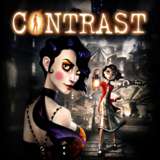 Carolyn loves Casablanca and dreams of spending smoky nights in elegant jazz clubs but has not yet been to Europe. She played through the PlayStation 4 version of Contrast at the GameSpot offices. It took her about four hours.