It's mean, it's intense, it's difficult, and it's a raucous good time. In a nutshell, it's Contra.

Contra 4 is awesome. And it is awesome in exactly the same ways as the classic games that bear the crest of Contra. Contra 4 is also mean. And it is mean in exactly the same ways as its forebears. That's perhaps a longwinded way to say, "Contra 4 is totally Contra," but regardless, the point remains. From its slavish dedication and great execution of the "run to the right, shoot stuff, don't get shot" formula, to its utterly ludicrous difficulty, Contra 4 is not a game for the easily vexed, but it is one for anyone who loves a challenging shooter.

While the numerical designation of "4" might not exactly be true, Contra 4 feels like more of an honest to god sequel to the classic Contra games as anything in recent memory. Part of that is thanks to developer WayForward's apparent deep, deep love of all things Contra. If you remember the classic arcade and NES games, you'll remember a lot of what goes on here. From the reuse of notable Contra heroes Bill and Lance (or Scorpion and Mad Dog, if you prefer), to the healthy smattering of classic Contra weaponry (the machine gun, the flamethrower, the ever-popular spread gun), and the subtle (and occasionally not-so-subtle) references to levels and bosses of Contra yesteryear, Contra 4 feels like a celebration of the franchise's heyday, a return to what made the series so fantastic in the first place.

And it holds up better than you might think. The developers took few, if any, risks with the formula here, turning in a gameplay design that just feels like a souped-up, two-screened version of 16-bit-era Contra. You run to the right, occasionally run up (in a nod to the behind-the-back levels from the original Contra), and just shoot every bit of vile alien scum that crosses your path while picking up some of the baddest guns around. The level designs here are top flight in every way. There's just enough nostalgia sprinkled in to send the fans into giggle fits, but at the same time, none of this stuff feels rehashed. These levels manage to feel new and exciting, even if they are just based on an age-old formula, while the boss fights are some of the most intense action you're going to find on the DS, period.

Intensity is really the name of the game here, and it's likely that it's going to be too much for some. More than perhaps any Contra game before it, Contra 4 is hard. Almost excruciatingly so. Normal difficulty is like some kind of cruel joke. Enemies and bullets appear from every which direction, often hanging out in the exact spot you're about to jump to or the area you'd most likely run to in order to duck certain death. Keeping yourself alive is as much about memorization of enemy attack patterns as it is about any measure of quantifiable skill. You get multiple continues if you happen to run out of lives on a given stage, but once you're out of continues, you start the game anew. Granted, this isn't an especially long game, but the odds of players blowing through this thing on their first, second, or even third sittings hover somewhere around the zero mark. To be fair, the game is extremely up front about its toughness, frequently mentioning the challenges you'll face and even making it abundantly clear that easy mode doesn't include the last two levels of the game. The difficulty itself feels almost like an in-joke for the fans. While it's bound to frustrate a number of people, those who can stomach it will persevere and enjoy themselves a great deal.

Though Contra might be a relatively short game, it sure doesn't skimp on the extras. This year is Contra's 20th anniversary, and in celebration of that fact, the game comes with a ton of extra content. Granted, you can't get too much of it until you unlock the challenge mode (which you can do by beating the game on any difficulty level, including easy mode) and start beating the game's challenges. These are all stand-alone level pieces that task you with everything from surviving an enemy onslaught to getting from one end of a level to the other without the aid of a gun. Easier said than done. But once you do get a few challenges completed, you'll unlock everything from additional characters and developer interviews to playable NES versions of Contra and Super C.

The only real bummer about those unlockable titles is that they don't come with multiplayer functionality. Contra was always a better game when you had both a blue and a red guy onscreen shooting at once. Without that, these older titles lose a bit of their appeal--not all of it, of course, but some. Contra 4, fortunately, does include multiplayer for two players, and that is, in fact, awesome. The only disappointment is that it's only for multicard play--no download option.

Contra 4 might not be one of the more immediately striking DS games you'll ever see, but while the game might mostly just look like a 16-bit game on heavy doses of performance-enhancing drugs, there's a lot of eye candy to be found the deeper you go into it. Whether it's the cool-looking backgrounds or the absolutely crazy-looking bosses, at nearly every turn, there is one impressive visual moment or another. The only real bummer is that periodically, the separation between the two screens causes some issues, like bullets you can't really see popping onto whichever screen you happen to be occupying. Audio is also quite enjoyable, from the "inspired by the classics" soundtrack to the goofily fantastic voice samples from the various heroes, such as "Lock and load!" or "Let's party!"

It's possible that Contra 4 might have benefited from a few updates to the design formula and maybe a drop in the difficulty by a half-notch or so, but those quibbles aside, the fact remains that Contra 4 is great at being a Contra game. There is no pretense here about the game being anything but an intensely difficult shooter, as well as a great piece of fan service, and it delivers on that promise. Contra fans and shooter fans in general would do well to pick this one up. It's a blast. 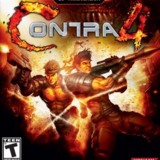