It's about the journey, not the destination.

Your time is over. Whatever quest you were on, young video game hero, is now finished. All your hearts, coins, and other worldly possessions--save for a simple broadsword--have abandoned you. Continue?9876543210 begins where most games end: your demise. Now you are faced with deletion, and then nothingness. But being the adventurous spirit that you are, you decide to use what little time you have left to attempt one last adventure--one final journey before the end. The outcome is certain. It's how you reconcile this fact that is at stake.

You awake from your demise in a sort of limbo populated by other fallen characters. It's really nothing more than a dingy little rock floating in the ether. Everyone here is awaiting deletion. The memory cache of this world will soon be wiped clean by a being referred to as the "garbage collector," and everyone in it will cease to be. This is inevitable. In response, limbo's inhabitants flutter about in hazy melancholy, rambling confusing, half-finished sentences and requesting something called "foo." What they think they're going to do with all this foo is a mystery, but it matters not. You have what they seek, and what they give you in exchange could be the key to your salvation.

The hero's journey seems so trivial as the game holds up a mirror to you--the player--and asks how accepting you are of your own mortality.

Continue's limbo is divided into 11 different areas, but you venture through only six of these on any given playthrough. Most of your time is spent running around these different areas--a sea pier, a mountain village, a red-light district--talking with the locals and bargaining for their help. The rest of your time is occupied by fighting the garbage collector's minions. These encounters mimic fights you might have in other games, such as a third-person brawler or a Space Invaders-esque shooter. Defeating all the minions is always your goal, but the combat itself takes on different forms from encounter to encounter.

Unfortunately, these enemy encounters highlight how poorly Continue handles. Your avatar darts around so quickly, and without momentum, that he feels out of place in the often cramped environments you explore. In combat, his sword attack is a quick stab that strikes enemies well beyond the reach of the blade. At best, this makes some fights ridiculously easy, while in others, it's difficult to judge who you're going to hit. Ultimately, you don't feel as if you have as much control over your character as you should.

Your existence is prolonged by interacting with others, and by balancing their gifts of either lightning or prayer. Lightning is used to reach the exit and continue to the next area. Prayers are used to shield you from the garbage collector after every two areas. To maximize the time you have left, you are encouraged to interact with as many people as possible. Speaking with and engaging others affords you more opportunities to earn lightning and prayers, which in turn lets you progress further on your quest.

This seems to be the heart of Continue's message. As previously stated, the outcome of this journey has already been determined. It's only a matter of time, and when the inevitable finds you--and your hero passes from existence--you receive a simple message telling you how your hero felt as he faded away. By utilizing your time to its fullest, your hero will feel more at ease with his passing. And once he's gone, and the game is over, it's hard not to stop and think how you will feel when your time comes. The hero's journey seems so trivial as the game holds up a mirror to you--the player--and asks how accepting you are of your own mortality.

Any game that can elicit such questions in its audience is an impressive feat. Continue's commentary on mortality, existence, and what is truly important in our lives will persist long after you put the game away. It is a pity the actual game supporting this evaluation isn't as rich as the subject matter it addresses. 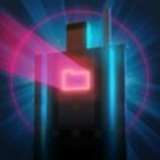 After his time with Continue, Maxwell has spent several long nights and early morning contemplating what's important in his own life. He still doesn't have all the answers, but maybe that's the point.